Low-temperature epitaxial growth process of group IV semiconductors (e.g. Si, Si1-xGex and Ge) is important for quantum-effect nano heterostructures of group IV semiconductors especially with suppressed intermixing at heterointerfaces [1]. Plasma CVD process is one of the candidates for low-temperature epitaxial growth of group IV semiconductors [2-4]. Recently, epitaxial growth of Si1-xGex alloy on Si(100) by surface reaction under electron-cyclotron resonance (ECR) Ar-plasma irradiation has been found, and it has been clarified that Ge fraction of Si1-xGex thin film is in good agreement with gas mixture ratio and that the surface reaction is slightly enhanced by increase of Ge in the films [4]. In this work, in order to control the surface reaction precisely for the better film quality and to obtain a high-quality quantum well heterostructure by our ECR Ar plasma CVD, partial pressure dependence of the reaction enhancement effect by Ge and Si cap layer deposition on Si1-xGex were investigated continuously. In this paper, typical new experimental results of Si1-xGex thin film formation including crystal quality and hydrogen incorporation are reported.

Fig. 2 shows the dependence of rate coefficient [(Si1-xGex deposition rate) × (Ge or Si fraction) / (partial pressure of GeH4 or SiH4 (PGeH4 or PSiH4))] in the Si1-xGex deposition on (a) PGeH4 and (b) PSiH4. Here, it should be noted that the rate coefficient is considered to be proportional to a decomposition probability of a GeH4 or SiH4 molecule arriving at surface. It is clear that, by increasing PGeH4 or decreasing PSiH4, the rate coefficients tend to become larger (Fig. 2). Although this tendency is apparently related to increase of Ge fraction in a larger Ge fraction region above x=0.5 (as reported previously [4]), it is additionally clear that the tendency is strongly dependent on a combination of PGeH4 and PSiH4 (Fig. 3(a)). Here, it should be noted that the larger increase of rate coefficients can be observed in a condition with the smaller change of Ge. From a view point that incident Ar plasma (ions and radicals) causes surface reaction, deposition rate is considered to be another important factor in the above strong dependence, because contribution of Ar plasma to decomposition of one molecule can be varied by change of deposition rate. From dependence of the rate coefficient on deposition rate (Fig. 3(b)), it is clear that increase of rate coefficients occurs in largely different region of deposition rate. Therefore, it is suggested that the change of rate coefficients depends not only on Ge fraction at surface but also on plasma irradiation condition as well as deposition rate. Additionally, it has been also found that amount of incorporated hydrogen in the Si1-xGex films epitaxially grown on Si(100) is as small as the order of detection limit of our FT-IR measurements (about 1020 cm-3) or below. Furthermore, it has been also confirmed that, by utilizing the surface reaction of SiH4 under ECR Ar plasma irradiation, a Si cap layer can be epitaxially grown on the strained Si0.50Ge0.50films lattice-matched to Si(100) and the strain is hardly relaxed. From this result, our ECR Ar plasma CVD process is expected to be applicable to quantum well heterostructure formation with suppressed intermixing.

This study was partially supported by a Grant-in-Aid for Scientific Research from the Ministry of Education, Culture, Sports, Science and Technology of Japan and the Japan Society for the Promotion of Science (JSPS) Core-to-Core Program, A. Advanced Research Networks “International Collaborative Research Center on Atomically Controlled Processing for Ultralarge Scale Integration”. 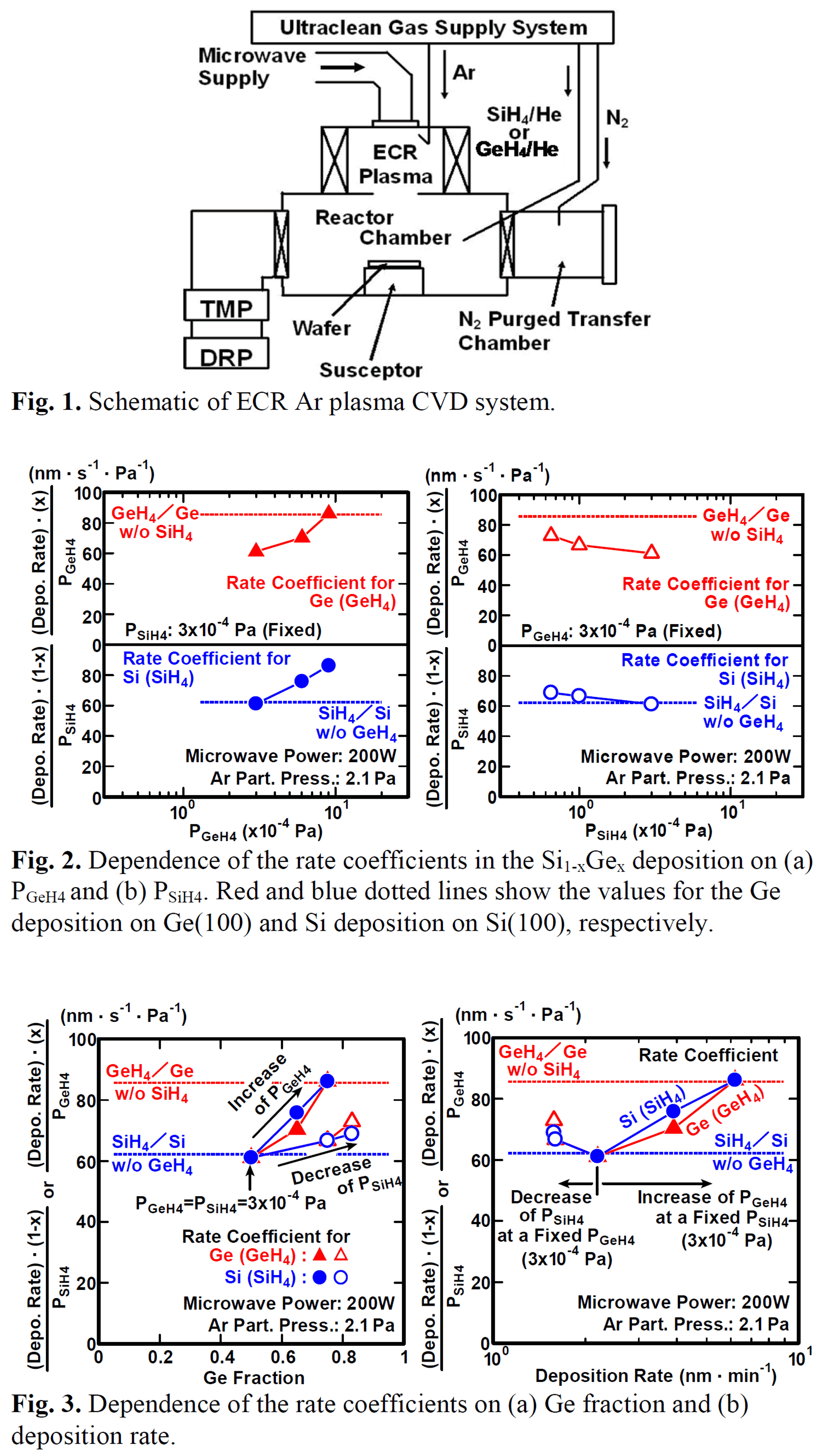