1684
Recent Progress in Cu Electrodeposition for TSV (Through Silicon Via)

Expo Center, 1st Floor, Universal 13 (Moon Palace Resort)
J. J. Kim, M. J. Kim, S. Choe, K. H. Kim, H. C. Kim, and A. Lee (Seoul National University)
Through silicon via (TSV) has been researched to obtain the multi-functional semiconductor devices which can be realized by 3-dimensional integration of primary devices using TSVs. After the formation of vias by plasma or laser etching processes, the diffusion barrier and Cu seed layers are deposited, followed by Cu electrodeposition to fill the vias without any defects. To improve the feasibility of TSVs, the organic additives used for Cu electrodeposition, the filling mechanism, new material and method for diffusion barrier and Cu seed layer formation should intensively be researched.

Various mechanisms of TSV filling have been reported: (i) concentration gradient of inhibiting adsorbate,1 (ii) anodic current to selectively deactivate the accelerator,2 and (iii) extreme bottom-up filling based on the bistability of inhibiting adsorbates.3,4 First, the rapid consumption of the inhibiting adsorbates or the convection dependent adsorption can develop the steep gradient of its concentration along the depth of TSV, inducing the relative enhancement of Cu electrodeposition at the bottom of features compared to that at the top or side wall.1 Second, the selective deactivation of accelerator at the top of TSV can maintain the difference between the deposition rates at the bottom and top of TSV.2 The dimension of TSV is much larger compared to fine trenches, therefore, Cu surface can be fully covered by the accelerator during the relatively long filling time. This results in the identical electrodeposition rate at the top, side wall, or the bottom, leading to the void formation. Therefore, the selective deactivation of accelerator at the top surface enables to succeed gap-filling by maintaining the acceleration of electrodeposition at the bottom of feature. Third, the extreme bottom-up filling is achieved based on the bistability of inhibiting adsorbates.3,4This means that the bottom of feature is active for Cu electrodeposition while the deposition is effectively inhibited at the top under the identical applied potential. The growing surface established at the bottom can rapidly grow, and the successful gap-filling can be obtained.

Recently, we introduced the galvanostatic bottom-up filling of trenches, which had similar dimensions to TSV, with three kinds of additives.5 Fig. 1 shows the evolution of deposition profile, indicating that the extreme bottom-up filling without significant deposition at the top surface. The adsorption states of three additives are described in Fig. 2. The gap-filling was enabled by the synergetic effects of accelerator, suppressor, and leveler. Because the molecular weight of suppressor was relatively high compared to other additives and the leveler could adsorb under the strong convection, the surface coverages of both inhibiting adsorbates are relatively high at the top surface and the side wall near the top. The growing surface was established by the accumulation of accelerator, which was formed with a small amount of suppressor. This growing surface induced the bottom-up filling. The coadsorption of leveler and suppressor effectively inhibited Cu deposition at the side wall and top surface, assisting the growth of Cu from the bottom. Under this filling mechanism, the trenches with 40 μm depth and 6, 8 μm widths are successfully filled by applying the current density of 10 mA/cm2for 15 min. However, the coarse Cu was formed near the top surface as observed in Fig. 1(f), which could increase the electrical resistivity as well as reduce the reliability of TSV. This problem was originated from the influences of additives, therefore, the organic additives should be modified.

In this presentation, we introduce the results of gap-filling with modified additives which improve the properties of Cu near the top surface of filling features. The filling mechanism will be elucidated with electrochemical analysis and filling profiles with various combinations of organic additives. Furthermore, the decomposition and maintenance of additives are discussed.

Figure 2. The schematic diagram indicating the speculated surface coverage and the inhibition strength at the side walls.5 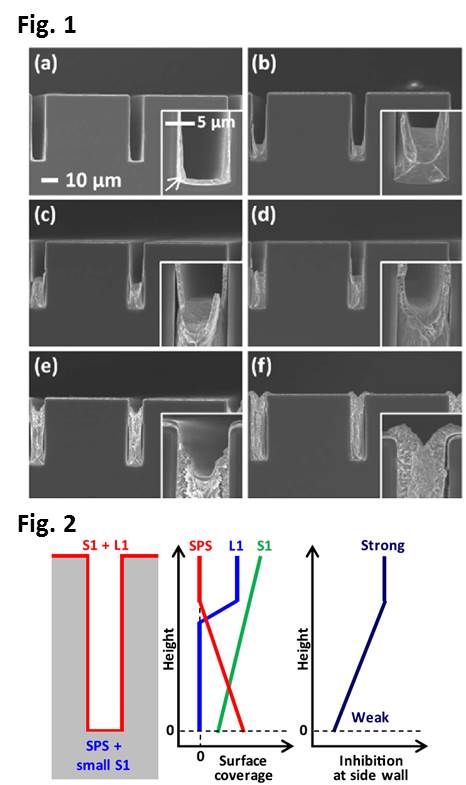