Expo Center, 1st Floor, Universal 13 (Moon Palace Resort)
Y. Kaneko, Y. Fukiage, A. Morita (Kyoto University), T. Hayashi, K. Kondo (Osaka Prefecture University), K. Ohara, and F. Asa (C. Uyemura & Co., Ltd.)
Through silicon via (TSV) is a promising technique to realize short connects in three-dimensional (3D) packaging in microelectronics. The crucial point for the fabrication of TSV is to achieve the superfilling of high-aspect-ratio via by using copper electrodeposition. A couple of mechanisms for superfilling have been proposed; leveler-based V-shape mechanism [1, 2], selective accelerator deactivation [3], extreme bottom-up with suppressors [4]. In this work, we study the microscopic mechanism of TSV filling on an atomic length scale focusing our attention on the V-shape mechanism.
The simulation system and additive modeling are described in our previous report [5]. Additives are supposed to be chloride ions, PEG (inhibitor), SPS (accelerator) and SDDACC (leveler). The assumptions for the additive effects are as follows. PEG is combined with CuCl  (CuClPEG) and suppresses the copper deposition on the surface. SPS is decomposed into two MPS molecules. MPS is combined with Cu(I) to produce Cu(I)thiolate which acts as an accelerant. SDDACC is assumed to have weak suppressing effect. We also assume a synergistic effect of SDDACC and PEG, i.e. the suppressing effect of PEG is enhanced in the presence of levelers. Within the framework of these assumptions, we studied the roles of additives and current patterns by the kinetic Monte Carlo (KMC) simulation.
Figure 1 shows the filling patterns of the three cases ; (a) basic bath with suppressors, accelerators and levelers, (b) with suppressors and accelerators, (c) with suppressors and levelers. For the basic bath (a), a typical V-shape superfilling is observed with no void formation. The growth of the opening and the sidewall of the via is suppressed by suppressors and levelers. At the lower part of the via, the growth of the bottom in upward direction is faster than that of sidewalls. This is due to the effect of accelerants (shown by green dots), which are distributed at the bottom. The V-shape of the growing surface is formed as a result of the interplay of these additives effects. Once the V-shape is formed, it is stable and maintained until the whole via is filled. Figure 1(b) is the case without levelers. The suppressing effect on the via sidewalls is not strong enough and a large void with triangular shape is formed. The filling without accelerators is shown in Fig.1(c). The growth pattern at the upper half of the via is the same as that of the basic bath (a). However, the growth in the early stage is almost conformal and voids appear as shown by gray area in the figure. Although the V-shape is formed after the lower part is filled, the voids remain around the via bottom. This means that the void formation in the early stage of the filling is eliminated by the effects of accelerators.
These results show that the formation of V-shape in the early stage is crucial for the superfilling. We discuss how the V-shape formation is influenced by the deposition conditions and current patterns, especially, pulse-reverse current and the role of cuprous ions produced by reverse current. [6]
References
[1] K. Kondo, Y. Suzuki, T. Saito, N. Okamoto, and M. Takeuchi, Electrochem. Solid-State Lett., 13, D26 (2010).
[2] T. Hayashi, K. Kondo, T. Saito, M. Takeuchi, and N. Okamoto, J. Electrochem. Soc. 158, D715 (2011).
[3] M. Hayase and K. Otsubo, J. Electrochem. Soc., 157, D628 (2010).
[4] T. P. Moffat and D. Josell, J. Electrochem. Soc., 159, D208 (2012).
[5] Y. Fukiage, Y. Kaneko, T. Hayashi, K. Kondo, K. Ohara and F. Asa, ECS Transaction, 50(32) 41 (2013).
[6] K. Kondo, T. Nakamura, N. Okamoto, J. Appl. Electrochem. 39, 1789 (2009). 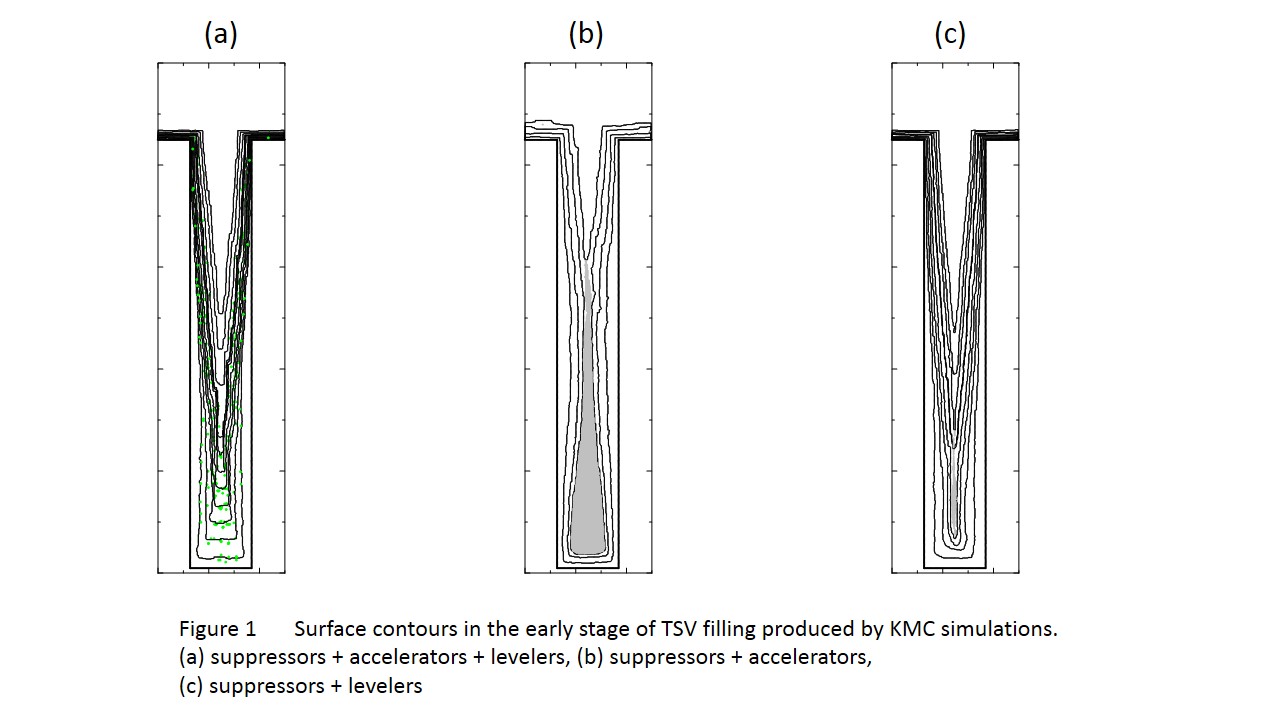