In order to realize RMG a thin insulating layer is deposited onto a silicon wafer and patterned to expose seed areas.  A blanket Ge layer is then deposited using a non-selective technique such as chemical vapour deposition (CVD) and patterned into strips protruding from the exposed Si seeds.  These strips are then encapsulated with an insulating layer in order to form micro-crucibles which contain the Ge during the RMG.  The wafers are heated using a rapid thermal annealer (RTA) at approximately 80 °C/s to a temperature above the melting point of Ge, in order to initiate the RMG process, and cooled naturally.  All dislocation defects formed as a result of the lattice mismatch between Si and Ge are contained in the seed area due to defect necking, resulting in localized single crystal SiGe-on-insulator formation.

Here we present a method of engineering the SiGe interdiffusion using tailored structures in order to modify the RMG kinetics resulting in a more consistent Si concentration along a SiGe strip.  The approximate Si concentration in the SiGe strips has been characterised using 532 nm Raman Spectroscopy by taking the ratio of the SiGe peak (seen at approximately 380-400 cm-1) and the GeGe peak (seen at approximately 300 cm-1), as shown in Figure 2.

This improved control of the Si concentration in single crystal SGOI could lead to a new breed of photonic and electronic devices on insulator. 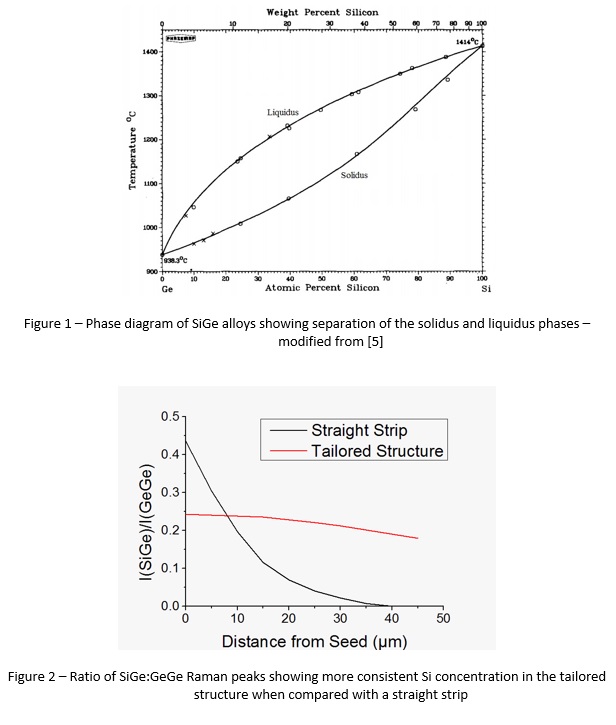