Expo Center, 1st Floor, Universal 8 (Moon Palace Resort)
O. Gourhant, C. Pribat, D. Barge (STMicroelectronics), V. Mazzocchi, F. Andrieu (CEA, LETI), F. Abbate, M. Juhel, C. Gaumer, E. Baylac, A. Pofelski, M. Bidaud, and G. Serventon (STMicroelectronics)
High mobility channels are considered as an interesting path to increase PMOS performances for advanced CMOS technology. Silicon-Germanium On Insulator (SGOI) benefits from both the advantage of the SiGe material (hole mobility booster) and the On Insulator structure (better electrostatic control of the channel by the gate) [1]. The co-integration of NMOS and PMOS, respectively on Silicon On Insulator (SOI) and SGOI zones, can be enabled easily by the Ge condensation technique [1,2]. This technique is based on the competition between Ge diffusion and Si oxidation which are both driven by temperature. For this purpose, mainly furnace oxidation is reported in the literature [1-3]. In this work, we propose to study Ge condensation using Rapid Thermal Oxidation (RTO) as an alternative process.

SGOI structures were fabricated on 300mm SOI wafers, with 11nm thick top silicon. First, epitaxy layers of SiGe were grown with varying thickness (from 3 to 10nm) and Ge concentration (from 10 to 40%). The SiGe film was grown by Rapid Thermal Chemical Vapor Deposition at temperature between 600°C and 650°C. Then, Ge condensation was performed by RTO in O2 ambient at temperatures between 950°C and 1150°C. Both aspects of Ge condensation were studied: Ge diffusion then Si oxidation.

The RTO temperature effect on Ge diffusion was analysed by ToF-SIMS (Figure 1). In the case of short oxidation duration (below 2 minutes), as typically used in RTO compared to furnace (several hours), almost no diffusion is observed at 950°C. This leads to Ge enrichment of the initial SiGe layer with Ge concentration gradient. For longer oxidation, this might result in very high Ge concentration generating strain relaxation via stacking fault creation [4]. Therefore, temperatures above 950°C are prefered to avoid defects creation. TEM and STEM-EDX of the structure after condensation (Figure 2) shows that Ge concentration is still not totally homogeneous at 1100°C.

Oxidation kinetics is shown on Figure 3, comparing the effect of substrate: SiGe/Si/BOX vs Si. SiGe is oxidized faster than Si, as already reported [5,6]. Moreover, SiGe oxidation is enhanced with increasing Ge concentration. Same trend is observed concerning SiGe thickness, indicating the effect of Ge diffusion in the underneath Si layer.

A compositional analysis of the oxide grown by condensation was performed by XPS, monitoring the Ge3d peak (Figure 4). Starting from the same SiGe/Si/BOX structure, the oxide thickness was kept the same using different RTO temperatures but tuning the O2 pressure and the RTO duration. The effect of Ge diffusion is clearly observed by the intensity of the Ge-Si contribution. Higher temperature leads to lower Ge concentration due to a more homogeneous Ge distribution. Surprisingly, Ge-O bounds are also observed, whereas SixGe1-xalloy oxidation is thermodynamically considered to be Si selective [7]. Moreover, the amount of Ge-O bounds increases when the RTO temperature decreases. As shown previously, low temperature oxidation leads to high Ge concentration at the SiO2/SiGe interface, which may enable the formation of Ge-O bounds [8]. As a consequence, oxidation kinetics plays an important role in this phenomenon.

This study reveals the significant role of temperature in Ge condensation by RTO. Due to kinetics effect, Ge-O bounds are formed which is not predicted by thermodynamics. Finally, the role of temperature will be investigated through electrical characterization of the SixGeyO properties. 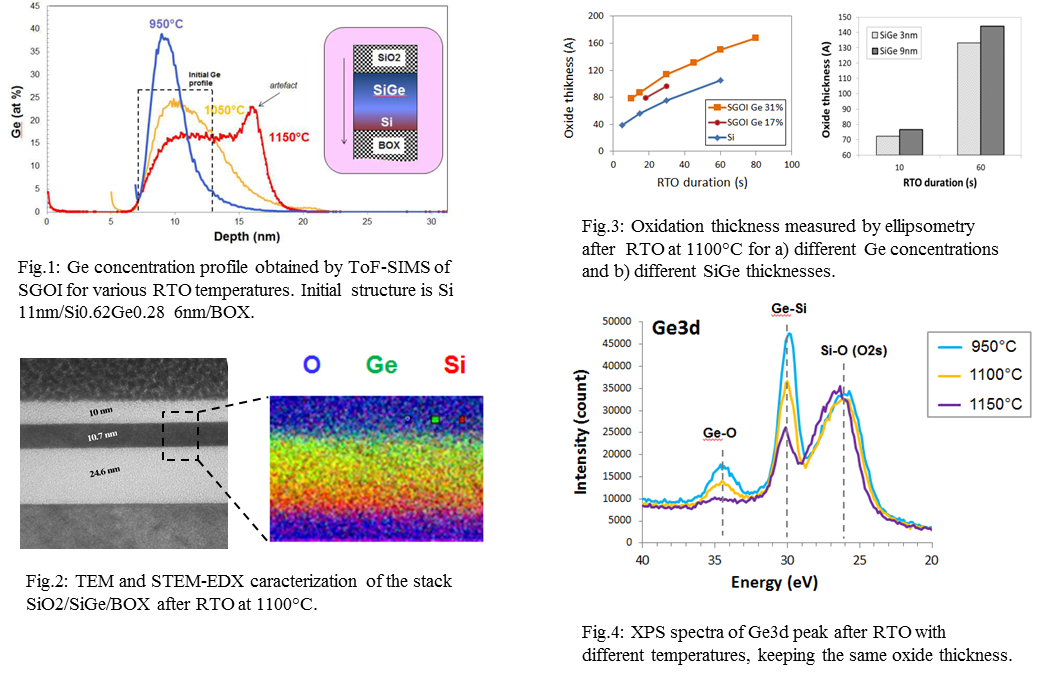