Fig. 1(a) shows the cross-sectional SEM image of the n-Ge/i-Ge layer. The p-i-n structure consists of a ~ 0.3 µm thick heavily phosphorus doped n-Ge layer and ~ 2.5 µm thick intrinsic Ge layer grown on p-Si substrate. Crystalline homogeneity and the microscopic strain state of the n-Ge/i-Ge epilayer analyze was performed high resolution X-ray diffraction (HR-XRD). The (400) peak of the n-Ge/i-Ge layer was observed at 5522 arcsec separated with respect to Si peak, as shown in the Fig 1(b). The HR-XRD rocking curve shape demonstrates the superior quality n-Ge/i-Ge layer and absence of tensile strain components because of two peaks are clearly observed.

In order to investigate the number of layers and quality of the CVD grown graphene after deposit on hetero-structure, the room-temperature Raman spectra were obtained using a 487.55 nm Ar-ion laser in the range of 1.000 to 3.000 cm-1 as shown in the Fig 2. The laser power applied to the sample was about 1.011mW. Raman spectrum of the graphene film is found to consist of two sharp peaks: i.e., 2D-band peak at ~ 2698 cm-1 and G-band peak at ~ 1581 cm-1, suggest that the transferred graphene was a monolayer graphene.

The p-i-n photodiode with round mesa structure as shown in schematic form in Fig.3. Diameter of mesa were 250 µm and mesa were defined by standard photolithography and CF4 reactive ion etching of the n-Ge/i-Ge layer to p-Si substrate by using inductively coupled plasma (ICP) etching.

Fig. 4 shows the typical forward and reverse biased J–V curves under dark and photo illuminated graphene/n-Ge/i-Ge/p-Si and n-Ge/i-Ge/p-Si hetero-junction photodiodes. We obtained reduced dark J from proposed graphene/n-Ge/i-Ge/p-Si photo diode. Dark current density and photocurrent density values were 0.49 A/cm2 and 3.01 A/cm2, respectively at reverse 1 V. Also, these values obtained to be 1.43 A/cm2 and 3.819 A/cm2 from n-Ge/i-Ge/p-Si photodiode at same bias. Ideality factor n was found to be 1.3 in the low voltage range. This implies that the dark current is dominated by diffusion rather than recombination, which indicates the high quality of the material.

The spectral photo-responsivity of the two p-i-n photodiodes measured at reverse 2 V for wavelength in the range from 1520-1630 nm. Detailed comparison results and discussions will be present in the full manuscript. 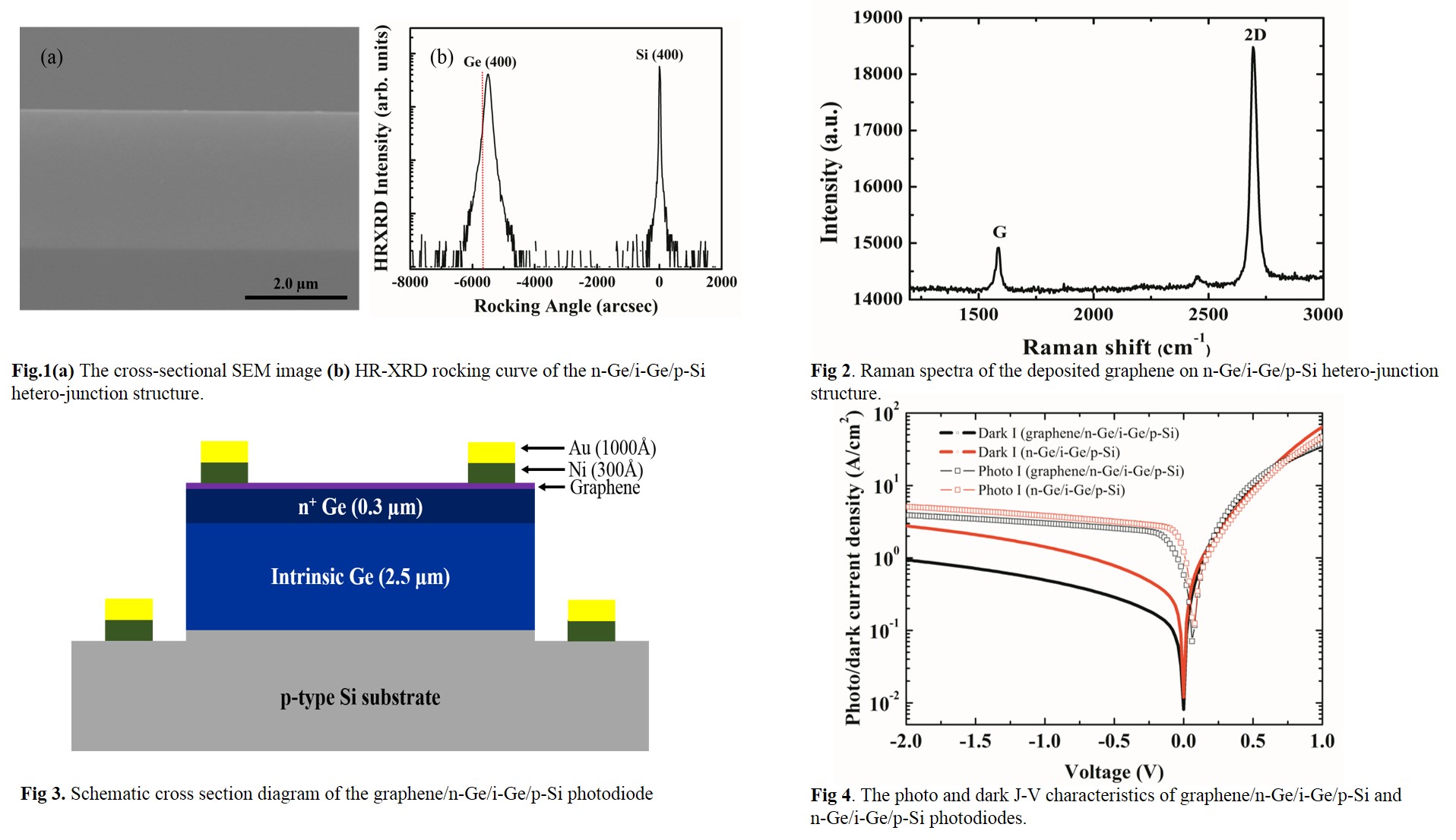