Expo Center, 1st Floor, Universal 9 (Moon Palace Resort)
H. Takagi (National Institute of Advanced Industrial Science and Technology (AIST)), Y. Kurashima (National institure of Advanced Industrial Science and Technology (AIST)), and A. Maeda (AIST)
In the surface activated bonding (SAB) at room temperature, the surfaces of specimens are sputter etched by high-energy ion/atom beam of inert gas to remove surface contaminants and create active surfaces, which are ready to form inter-atomic bonds even at room temperature. Ar has been used for the purpose. However, sputter etching by Ar high-energy ion/atom beam causes increase of surface roughness. In case of wafer direct bonding, the surface roughness has large influence on the quality of bonding interface such as bonding strength, local strain, and so on. Therefore a surface activation process which does not cause surface roughening has been desired.

In this work, we have examined the applicability of Ne fast-atom-beam (FAB) to SAB of Si wafers at room temperature. We confirmed that Ne-FAB does not cause surface roughening and Si wafers are successfully bonded by Ne-beam surface activation. In addition, we found that Ne-FAB sputter etching has surface smoothing effect which improves quality of the bonding interface.

The room temperature wafer bonding apparatus (MWB-12-ST: Mitsubishi Heavy Industries) with the FAB 104 (Atom Tech Ltd.) beam sources were used for bonding of Si wafers. The etching rate of Si surface by Ne-FAB was about half of that of Ar-FAB using the beam source operation parameters of 1.8 kV applied voltage and 100 mA input current. With etching depth more than 1.5 nm, the bonding strength comparable to Si bulk strength was attained by Ne-FAB surface activation. With etching depth of 30 nm, we measured surface roughening of Si wafers using Ne, Ar and Xe gas. The surface roughness of Si wafers largely increased by the Ar and Xe-FAB sputter etching. In case of Ne-FAB, the surface roughness did not increase by the sputter etching and kept the initial rms value of 0.18 nm of CMP-polished Si wafers.

Moreover, we found surface smoothing effect of the Ne-FAB. We prepared Si wafers which had been roughened by Xe-FAB etching. They could not be bonded directly by SAB. Surface roughness of the roughened Si wafer decreased from 0.40 to 0.17 nm rms by applying Ne-FAB of 30 nm etching depth. Along with the surface smoothing, the bonding strength was largely improved and finally became equivalent to Si bulk strength. It was confirmed that strain near the bonding interface was decreased by the smoothing effect as shown in Figure. 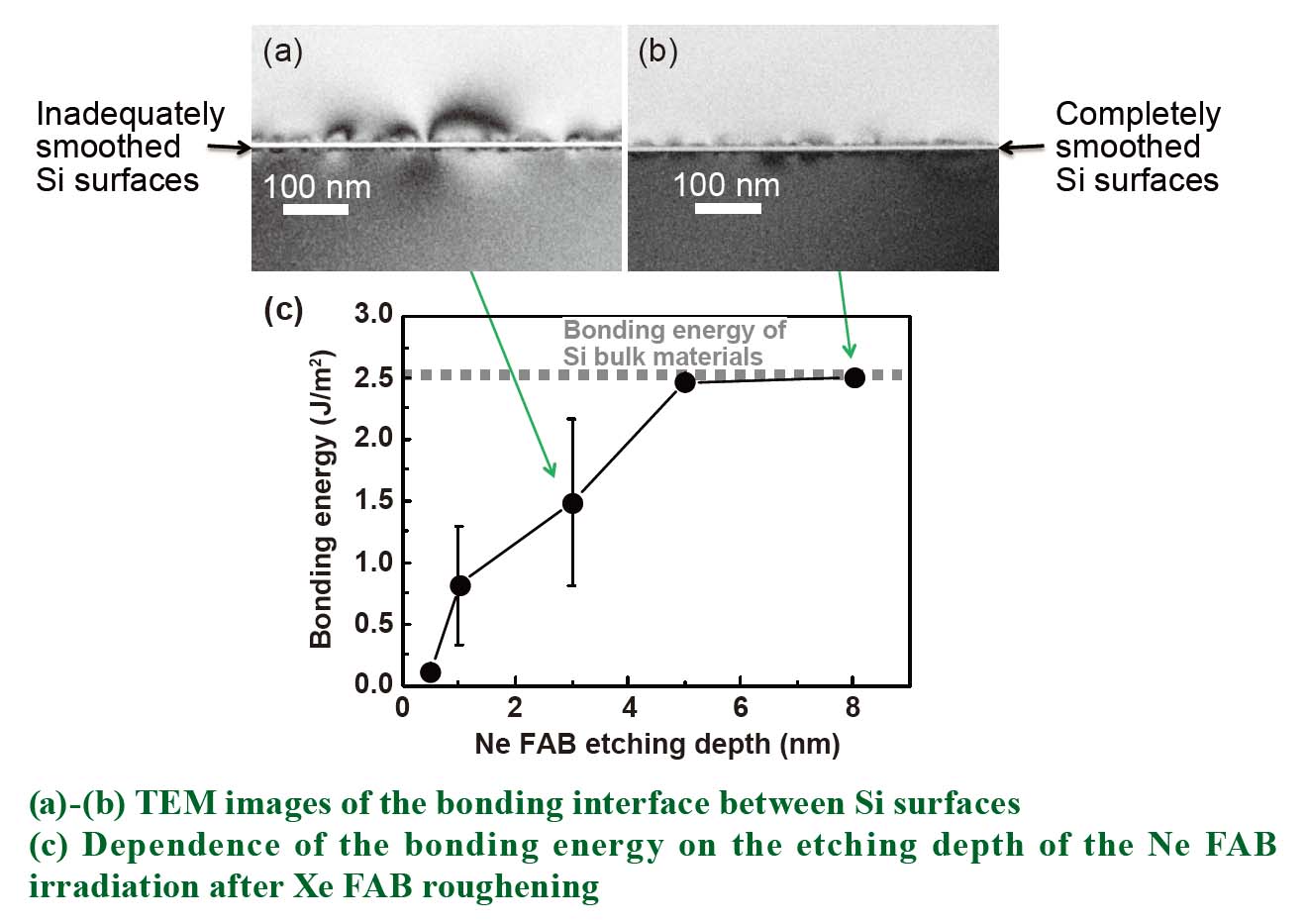