Expo Center, 1st Floor, Universal 8 (Moon Palace Resort)
A. K. Swarnakar (National Institute of Technology, KU Leuven), O. Van der Biest, J. Van Humbeeck (KU Leuven), and J. Vanhellemont (Ghent University)
The anelastic relaxation process in crystalline solids is influenced by various mechanisms including diffusion of atoms and point defects, grain boundary viscosity, dislocation, phase transformation, etc. To analyze the type and concentration of relaxing units participating in a particular activated process, measuring the internal friction is a well-known approach. A fundamental measure of internal friction can be defined as the ratio between the mechanical energy dissipated during one cycle in a unit volume and the maximum stored elastic energy per unit volume during that cycle [1]. The impulse excitation technique (IET) is a well-established mechanical spectroscopic technique analyzing the internal friction and Young’s modulus behaviour of materials as function of temperature [2]. IET measures the resonant frequency of a specimen by exciting it mechanically with an impulse tool. The resonance frequencies are characteristic for the sample material and are related to its stiffness, mass and geometry. The amplitude decay of a free vibration can be related to the internal friction, i.e. the dissipation of the vibration energy or damping. Measurement of the resonance frequency allows the calculation of Young's modulus E. This technique has been previously applied to determine the temperature dependent Young's modulus of single crystal silicon and germanium in the <100>, <110> and <111> crystallographic directions [3,4,5].

More and more, single crystal germanium and silicon layers and substrates are used together to process advanced nano-eletronic devices. The thermal stresses during crystal growth and device processing have an important impact on generation and diffusion of point defects and in the worst case also can lead to dislocation generation. Although the temperature dependent mechanical properties of silicon are well known, this is much less the case for germanium.

In the present study, the impulse excitation technique was used to analyze the temperature dependence of the internal friction in single crystal Ge in the <111>, <100> and <110> directions between room and melting temperatures. A similar set-up was used as in [6] but equipped with a specimen chamber and specimen suspension system allowing heating the samples in an inert atmosphere up to the Ge melt temperature. Between room temperature and melt temperature, three internal friction peaks were observed for each crystallographic orientation after internal friction spectrum analysis, a typical spectrum is shown in the figure. The mechanism leading to these peaks is thermally activated. To interpret the observed internal friction peaks, various aspects such as activation energy of peaks, peak positions and relaxation time will be discussed. The origin of the relaxation peaks is associated with intrinsic point defect processes and/or extended defect formation. 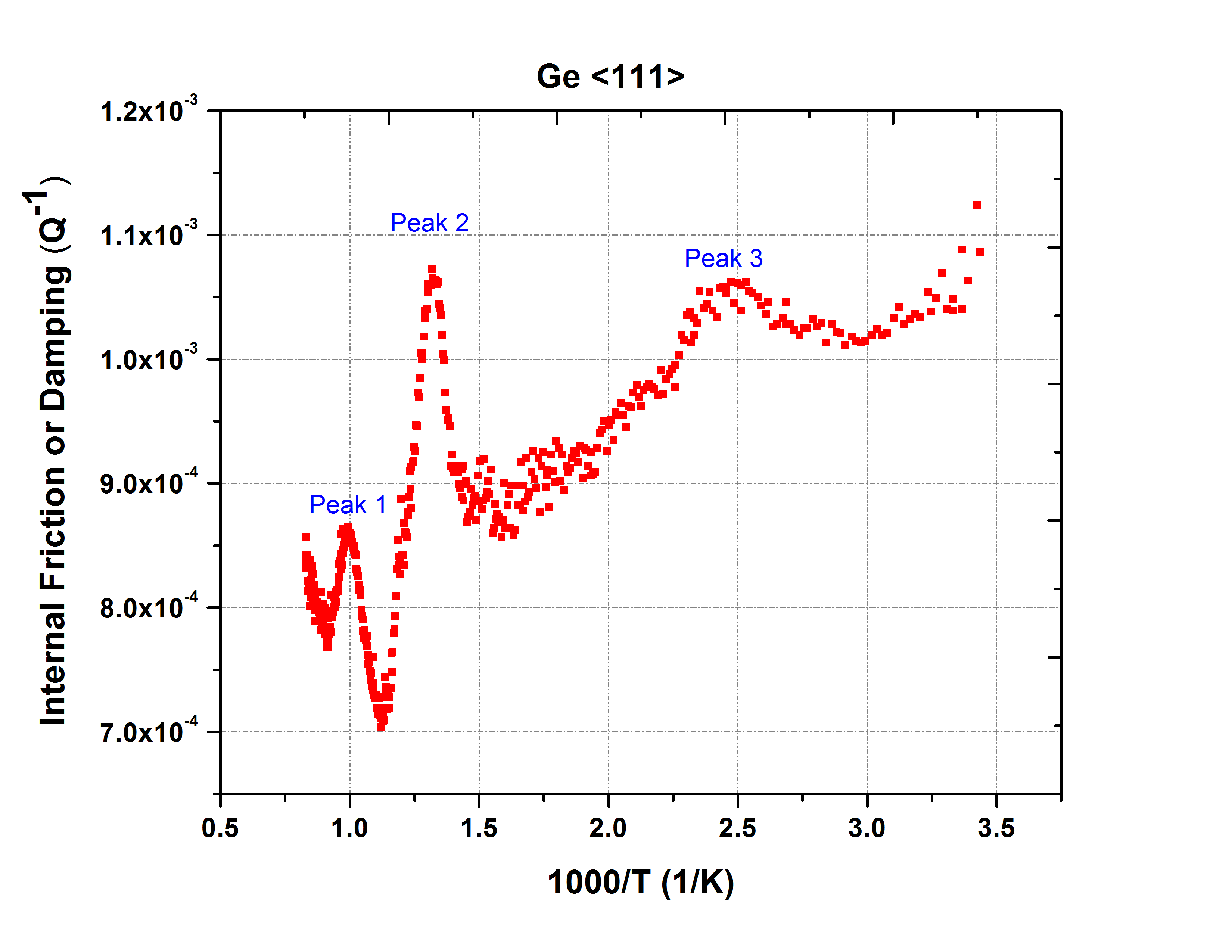