Expo Center, 1st Floor, Universal 8 (Moon Palace Resort)
Z. Li, G. Niu (Auburn University), and X. Wei (Huazhong University of Science and Technology)
Intermodulation linearity is an important consideration for RF technologies. Third order intermodulation linearity is typically considered, as third order output is close to the fundamentals. Second order intermodulation outputs are far away from the fundamentals, and thus can be filtered [1]. However, the same second order nonlinearity also produces dc offset, which presents a significant problem for direct-conversion receivers [2]. While differential circuits can decrease second order nonlinearity, cancellation is not complete, and is worsened by transistor mismatch.

We present here characterization of the second order intermodulation linearity on 200 GHz peak fT SiGe HBTs. The second order input intercept point, IIP2, is characterized on IC-VCE plane for different breakdown voltages. The measurement system is set up and calibrated according to [3].

Fig. 1 (a) and (b) show the measured IIP2 and fT versus IC for VCE = 1.0, 1.3, 1.6, and 1.9 V on a standard breakdown voltage (SBV) HBT. For comparison, the third order input intercept point (IIP3) is shown in Fig. 1 (c). IIP2 increases with IC before fT roll-off, and then decreases. A higher VCE effectively delays IIP2, fT and IIP3 roll-off overall. The impact is more obvious for IIP2 and IIP3 than for fT. Observe that the IIP3 peak is reached at a much smaller IC, well before peak fT is reached. IIP2 peaks either reside inside the flat fT region or closely lag behind fT roll-off. At high IC, higher VCE shifts IIP2 to higher level, implying that a higher VCE can be used to effectively improve IIP2 at higher currents.

In Fig. 2 (a) and (b) , the current dependence of IIP2 and fT are compared for three HBTs of different breakdown voltage. IIP2 first increases with IC, peaks, and then decreases sharply before rising again. The IIP2 peak occurs approximately at the same current as the fT peak for all breakdown voltages. Before 1 mA, IIP2 is the same for all, indicating that the collector-base junction difference does not affect IIP2 so long as high injection does not occur. A higher VCE could be used with higher breakdown devices to extend the current range of high fT and IIP2, which is also confirmed by measurement. 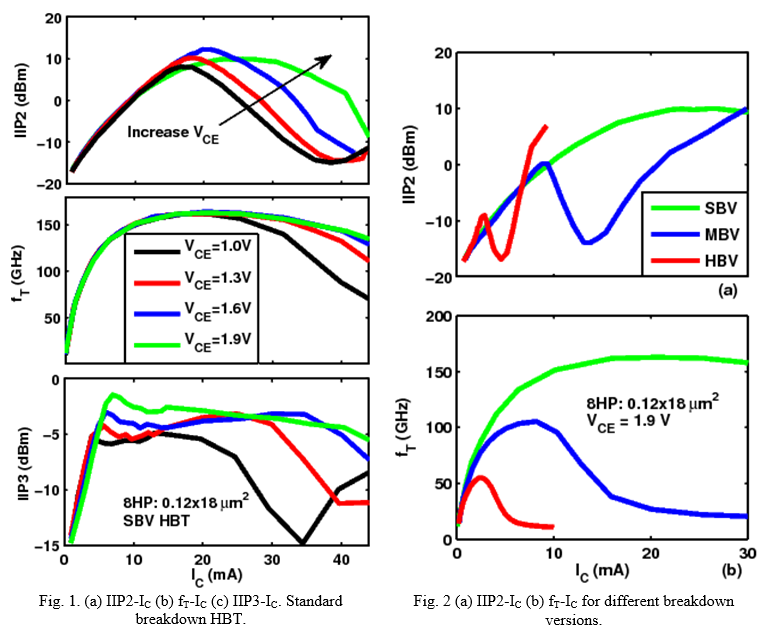