Direct gap photoluminescence, electroluminescence and optical gains at wavelengths close to 1.6 µm have recently been demonstrated in tensile-strained, phosphorous-doped Ge layers grown on Si(001). The electrons given by the n-type impurities to the Ge crystalline lattice occupy the L valleys of the conduction band, exalting fast, direct transitions between the Γ point of the conduction band and the heavy and light holes sub-bands of the valence band. There is however a scarcity of results on the impact of PH3 on the structural and electronic properties of Ge:P layers (with GeH4 as the Ge gaseous precursor). We have quite conclusively shown in J. Cryst. Growth 347, 37 (2012) that low deposition temperatures and high growth pressures yielded the high P contents aimed for in Ge (> 1019 cm-3; suppression of P surface segregation).

We have thus grown at 400°C, 100 Torr on p-type Si(001) substrates thin (~ 350 nm) and thick (~ 700 nm) Ge:P layers with various PH3 flows. Those Ge:P layers were submitted afterwards to a 60s, 750°C anneal or to a 3x(750°C, 10s / 875°C, 10s) thermal cycling, both under H2, to cure crystalline defects and improve electronic properties. We will quantify in the following the impact of PH3flow, thickness and annealing scheme on the structural, electrical and optical properties of the resulting Ge:P layers.

A transition from smooth, “mirror-like” to rough, “milky” surfaces was evidenced above a F(PH3)/F(GeH4) mass-flow ratio close to 10-3 (irrespectively of the thickness or the H2 anneal used). This was associated with a sudden drop in deposited thickness (from 739 down to 579 nm and from 365 down to 303 nm, respectively). Hills together with dislocation slip lines running along the <110> directions (for thick, cyclically annealed layers), were evidenced in Atomic Force Microscopy. The surface root mean square roughness and Z range increased almost exponentially with the PH3 flow, reaching really high values above the threshold PH3flow (33 and 242 nm for thick Ge:P layers <=> 7 and 59 nm for thin Ge:P layers). Thick Ge:P layers were otherwise 70% rougher with a single 750°C anneal than with a cyclic anneal. The opposite was true with thin Ge:P layers, which were 15% smoother with the former than the latter.

X-Ray Diffraction showed that all Ge:P layers were slightly tensile-strained and diffracted coherently irrespectively of the process conditions used. The strain was however slightly higher after a cyclic anneal than after a 750°C, 60s anneal (macroscopic degree of strain relaxation R: 105.5 – 106% <=> 104 – 104.5%). Four points probe resistivity measurements showed that the resistivity was higher (and thus the P+ ions concentration lower) (i) in thin than in thick Ge:P layers and (ii) after a cyclic anneal (up to 875°C) than after a straightforward 750°C, 60s anneal (P out-diffusion). P+ ions concentrations more than 2x1019 cm-3were nevertheless achieved.

Finally, room temperature photoluminescence measurements showed a factor close to 10 increase of the PL peak Intensity together with a red shift in Ge:P layers (figure). The PL intensity dropped dramatically irrespectively of the process conditions when F(PH3)/F(GeH4) significantly exceeded the threshold value (rough but still crystalline layers). Higher PL peak intensities were otherwise obtained after 750°C, 60s anneals than after cyclic anneals (which yield higher crystalline quality, smoother and slightly more tensile-strained layers); this is likely due to P loss because of out-diffusion.

Using such Ge:P layers as the core of micro-bridges (Nature Photonics 7, 466 (2013) could be interesting as high strain and in-situ P doping would then be combined, with potentially a beneficial impact on optical properties.

The support of the “Phare” DSM/DRT Project is gratefully acknowledged. 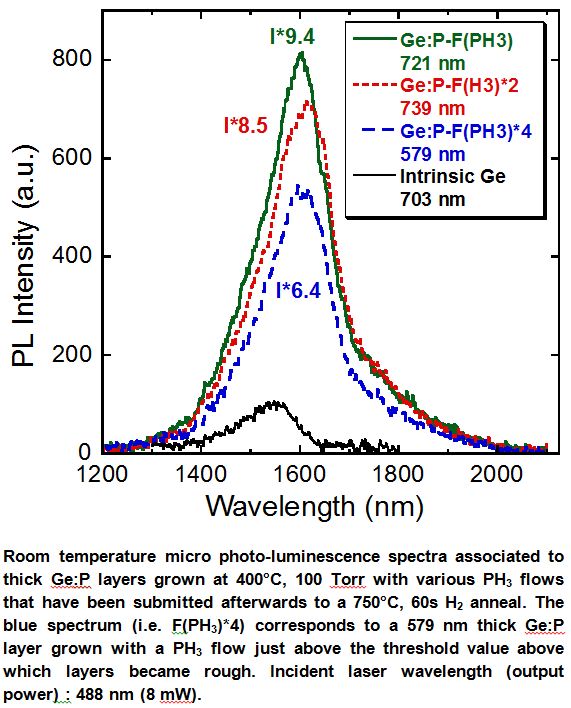