As an example we show in Fig. 1 scanning electron microscopy images obtained on space-filling arrays of Si, Si0.6Ge0.4 and Ge crystals grown to a height of 8 µm onto 2 µm wide pillars separated by 2 µm wide trenches etched to a depth of 8 µm into Si(001). The surface diffusion lengths were kept approximately the same for the three arrays by keeping the deposition rate constant while lowering the substrate temperature from 810° C for Si, to 660° C for the alloy and finally to 485° C for Ge. This is reflected in the remarkably similar crystal morphology for the three cases, characterized by narrow gaps between neighboring crystals and closely similar facet structures. The unusual growth mode of Fig. 1 results mainly from the combination of short surface diffusion lengths below typical facet sizes and reactive flux shielding by neighboring substrate pillars or crystals. While the latter is essentially given by the substrate geometry, tuning of the diffusion lengths by means of substrate temperature may affect the deposition rate. Indeed, the structures of Fig. 1 have been obtained by low-energy plasma-enhanced chemical deposition [2], providing fast, nearly temperature independent deposition rates.  The approach is applicable also to off-cut substrates and to other substrate orientations. Figure 2 shows an example of an array of 8 µm tall Ge0.9Si0.1crystals on Si(111) pillars.

High-resolution X-ray diffraction with laboratory sources and scanning nano-diffraction by a focused synchrotron X-ray beam proves that the structures of Figs. 1 and 2 are entirely free from misfit and thermal strain [3]. Wafer bowing is virtually eliminated and layer cracks cannot arise.

The short surface diffusion lengths required for the growth of 3D crystal arrays can more easily be attained for compound semiconductors. Here the ratio of anion and cation radical fluxes provides an additional control parameter such that molecular beam epitaxy and even chemical vapor deposition (CVD) can be used as deposition tools.

We have applied the method outlined above to the growth of 3C-SiC on deeply patterned Si(001) by low pressure CVD. As an example we show in Fig. 3 a cross-section SEM image through 3C-SiC ridges which clearly exhibit the kind of self-limited lateral expansion visible also in Figs. 2 and 3. For high SiC ridges all stacking faults on {111} planes parallel to the ridges escape through the ridge sidewalls.

Financial support by the Swiss federal program Nano-Tera through project NEXRAY, by Fondazione Cariplo through the MANDIS project, and by PileGrowth Tech is gratefully acknowledged. 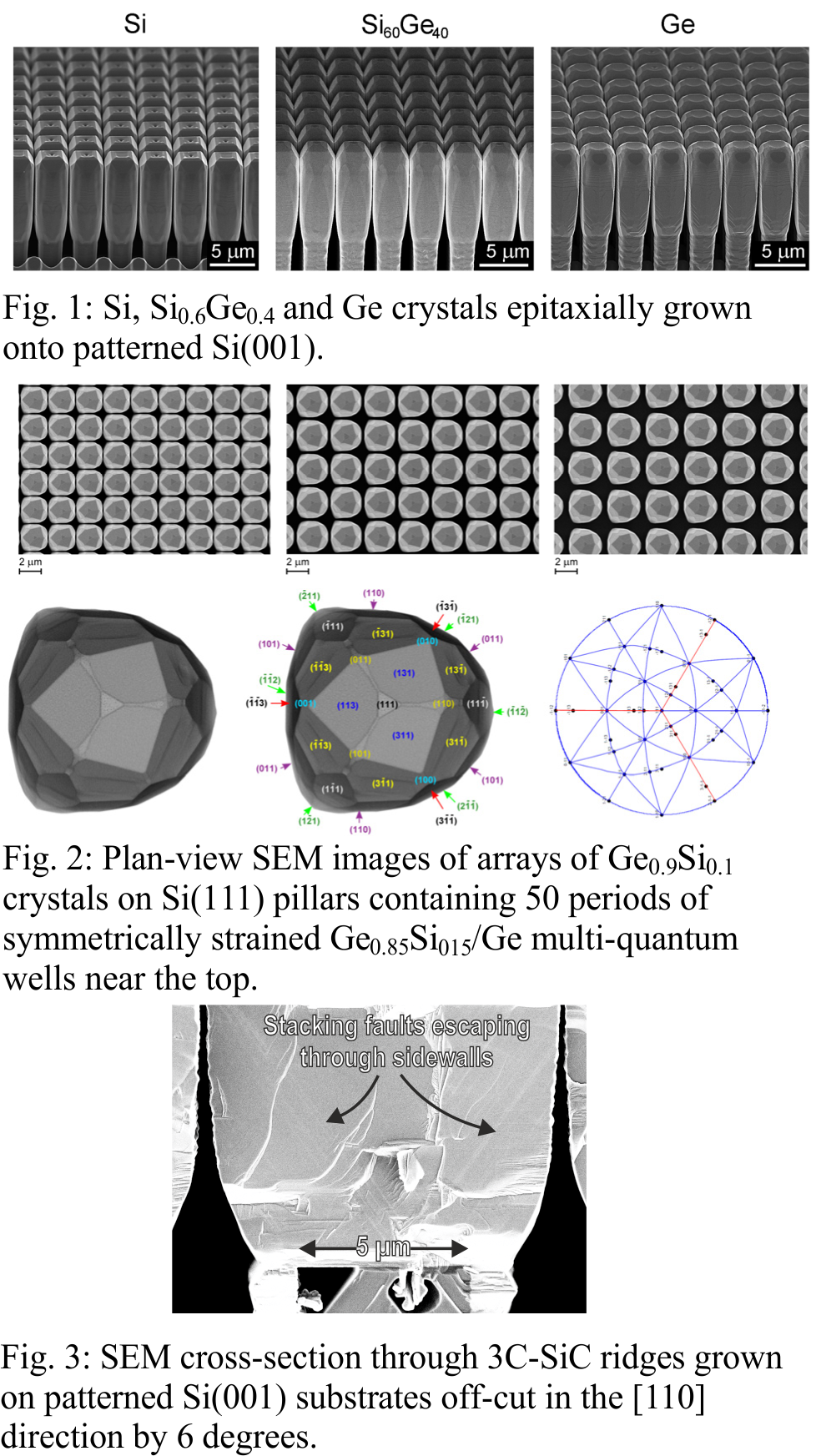