Expo Center, 1st Floor, Universal 8 (Moon Palace Resort)
R. Lachner (Infineon Technologies AG)
DOTSEVEN is a very ambitious 3.5 year R&D project targeting the development of Silicon Germanium (SiGe) Heterojunction Bipolar Transistor (HBT) technologies with cut-off frequencies (fmax) of around 700 GHz. The project is publically funded within the European Union's Seventh Framework Program for Research (FP7). It started in October 2012 and is now at the beginning of its second year. 10 out of the 12 DOTSEVEN participants were already partnering in the predecessor FP7 project DOTFIVE which succeeded for the first time to push fmax of SiGe HBTs (at room temperature) into the 500 GHz region thus setting a new world-wide benchmark.

For a given lithography node, SiGe HBTs provide much higher cut-off frequencies compared to CMOS transistors while offering higher power density and better analog performance. Although ITRS roadmaps [1] predict ever increasing cut-off frequencies for CMOS transistors up to the THz region, there are indications [2,3] that at least fmax will saturate around the 28 nm node at 300-400 GHz (depending on the extraction methodology) and will even drop beyond that node due to parasitic gate resistance [Figure 1]. Thus SiGe HBT technology and SiGe HBT enhanced CMOS (SiGe BiCMOS) will be key enablers for demanding mm-wave systems requiring more than a few µWatts of RF output power (which limits the applicability of even very advanced CMOS) and also offer high integration levels at low cost which precludes expensive and less integrated III-V solutions. Physics based simulations predict “balanced” fT/fmax limits of well above 1 THz for SiGe HBTs [4].

In DOTFIVE the practical performance limits of lateral and vertical scaling of standard HBT topologies which are in use in 200-300 GHz production processes at STM and IFX have shown up clearly. With these conventional DPSA (double poly self aligned) emitter / base structures incorporating an external poly-silicon base-contact which is vertically linked to the SEG (selectively grown) SiGe:C base layer, we were not able to surpass a  “400 GHz” limit  of fmax significantly [5]. Reaching 500 GHz was only possible with two new transistor architectures realized by IHP employing novel “lateral base-link” [6] or “epitaxial external base-contact” concepts [7] which will be utilized in DOTSEVEN as starting point as they have potential to overcome a basic weakness of conventional DPSA structures:  their relatively high-resistive external base-link region [8,9].

Within the project the capabilities and benefits of >500 GHz SiGe HBT technology will be demonstrated by benchmark circuits and advanced system applications in the 0.1 to 1 THz range like THz imaging and sensing, wireless Gb/s communications and millimeter-wave radar. Process development will be strongly supported by TCAD and physics-based modeling including 3D, nanoscale and thermal effects where as "first-time-right" circuit design will be enabled by accurate compact device modeling including electro-thermal, substrate and other parasitic effects. Of course these models have to be based on accurately extracted parameter sets for which in turn accurate and reliable characterization and extraction methodologies are mandatory. High current densities, excessive self-heating and operation at collector-emitter voltages above the open-base VCE breakdown limit might impose considerable reliability risks in downscaled HBTs and limit their practical application. Therefore in-depth reliability modeling and investigations will be undertaken in the project too. 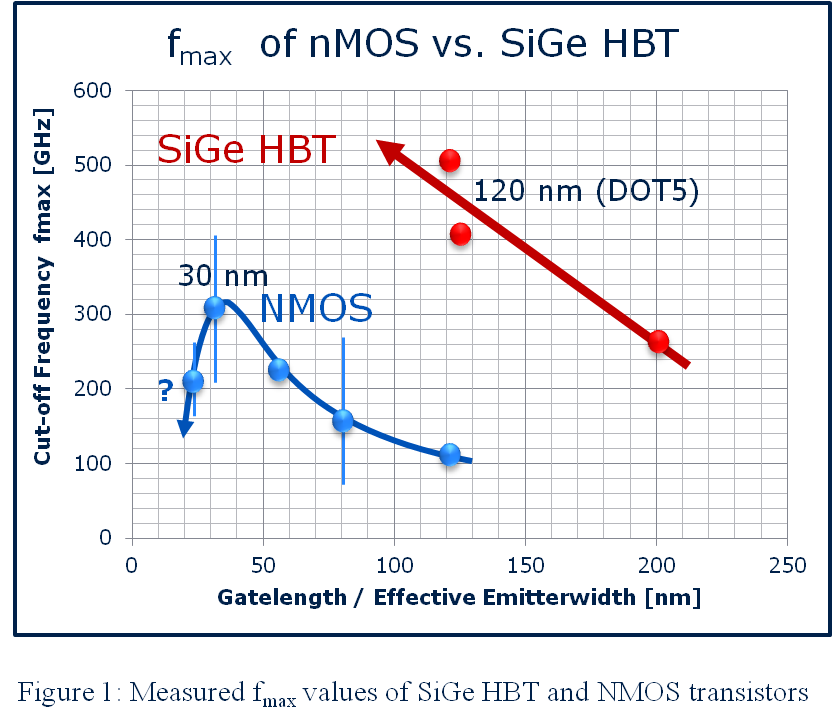