The layer growth is dependent on the degree of ionization of the polyelectrolytes which generally is a function of the solution pH and salt content. If polyelectrolytes are strongly dissociated (high degree of ionization) they are in the solution preferably present in a stretched confor­mation, due to the electrostatic repulsion of the charged centers, which usually leads to a small growth rate for a layer. If the PEs are less strongly dissociated, for example in the case of so-called weak PEs with pH-dependent dissociation equilibrium, they usually take a coiled conformation and my lead to a larger thickness increment upon adsorption. The thickness increment for a single PE layer may be constant, independent of the number n of double layers already present (linear growth mode), it can, however, also increase with n leading to a non-linear or exponential growth.

In the present contribution the temperature dependence of the adhesion of silicon wafers was investigated, using PEMs consisting of poly(allylamine hydrochloride) (PAH) deposited at pH = 7.5 and polyacrylic acid (PAA, pH = 3.5). The wafers were wetted in a spin dryer for 60 s by each one of the PE solutions, respectively, and rinsed with water in between. As a first layer PAH was applied and subsequently PAA, so that a double layer (DL) PAH/PAA is formed. Afterwards the wafers were directly bonded.

The adhesion of the PE can be characterized by a method which determines the wafer pair surface energy in situduring annealing. This makes it possible to monitor the adhesion during thermal treatment.

Figure 1 shows the results for three wafer pairs. The “reference” wafer pair was bonded directly without any polyelectrolyte coating. The surface energy increases constantly with the temperature and time.

The wafers pair 1 consists of one wafer having 1 double-layer PAH/PAA and one wafer having 1.5 double-layers, i.e., the sequence PAH/PAA/PAH is present on the second wafer. Consequently a positively charged and a negatively charged terminal polyelectrolyte layer were brought into contact. The surface energy, shown in Figure 1, firstly increases continuously, then it drops signi­ficantly around 100 °C and reaches almost zero at 150 °C.

Wafer pair 2 consists of one non-coated wafer and one wafer having 2.5 double-layers (PAH/.../PAH). Also for this wafer pair the surface energy increases to about 100 °C, and decreases at higher temperatures.

First experiments with glass wafer pairs indicate that the decrease of surface energy at temperatures beyond 100 °C is much smaller or even absent. One may speculate that the water content of the polyelectrolyte layers may play a crucial role for the drop of the surface energy observed with silicon wafers: The bubbles observed in the bond interface of the silicon wafer pairs 1 and 2 probably arise from hydrogen gas generated during the reaction of thermally liberated water with silicon.

The advantage of the use of polyelectrolyte layers for temporary bonding is particulary its simple applicability: No special equipment is needed for the coating and, in contrast to what frequently results during spin coating, the layer thickness is uniform over the whole wafer. Polyelectrolytes are available at low costs and can be safely handled in aqueous solution. Furthermore, the polyelectrolyte layers are only a few 10 nm thick and can easily be removed from the surfaces after debonding. Moreover, the coating of cavities in the processed wafer can be avoided if only the carrier is coated with polyelectrolytes. 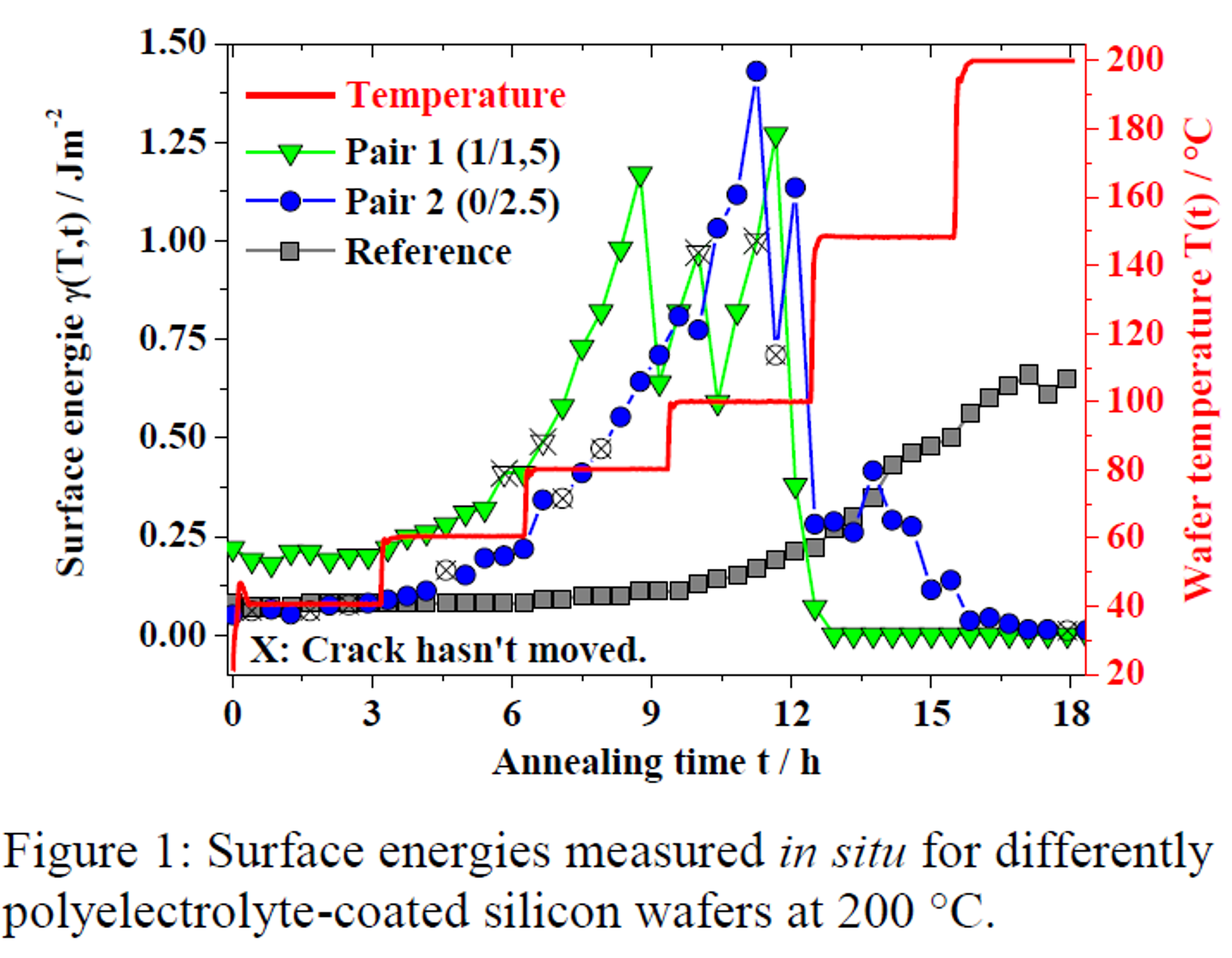