Expo Center, 1st Floor, Universal 13 (Moon Palace Resort)
L. Boehme and U. Landau (Case Western Reserve University)
The miniaturization of semiconductor devices poses­­­­­­­ challenges to interconnect metallization. Transport limitations within the features, which affect primarily the distribution of the additives, have been studied extensively in the past, experimentally and analytically1-3. However, the effect of transport external to the small features (vias or trenches), has not previously been addressed. Such transport limitations, that are directly related to the external flow and the wafer rotation, will affect the concentration of the species diffusing into the feature and thus may have profound effect on the feature fill process. We analyze here the effects of the external flow field and the boundary layer on the additives surface coverage and the via fill process.

Applying a computer based model, we analyze first the additives (suppressor, e.g., PEG, and anti-suppressor, e.g., SPS) distribution on a flat wafer. We determine the transient additives coverage on the surface and find, as expected, that the transport limited suppressor concentration increases with the rotation rate4. More significant is the analysis of the additives distribution on the sidewalls and the bottom of a via. We find that the transport and adsorption parameters applied in the model strongly affect the results. Applying commonly used parameters1-3 and considering the external transport limitations leads to a significantly lower suppressor concentration at the via rim and upper sidewalls (as shown in Fig. 1) than had been previously predicted2. This will consequently lead to inadequate fill. However, when applying transport and adsorption parameters that have been recently determined by co-injection studies4we note that the external flow has a significantly lower impact on the additives concentration within the via. Accordingly, the simulated process, accounting for the flow effects follows more closely predictions which neglected to consider the external boundary layer (Fig. 2).  Experimental data reported in the literature indicates similar trends to those predicted by the current analysis. 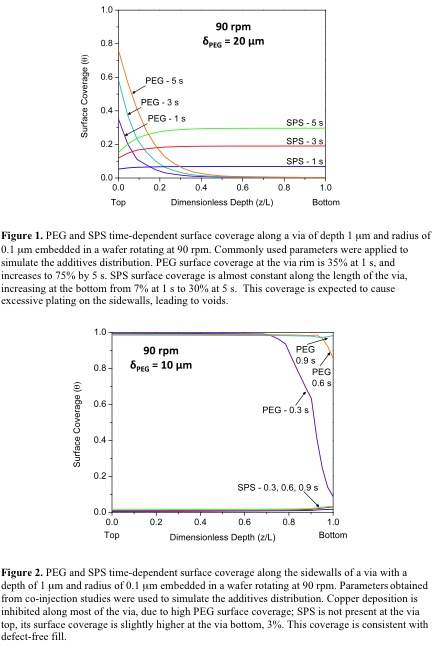