Expo Center, 1st Floor, Universal 13 (Moon Palace Resort)
L. Boehme and U. Landau (Case Western Reserve University)
Modeling and optimization studies of interconnect metallization require the application of numerous process parameters. These include the diffusion coefficients of the suppressor and the anti-suppressor species enabling the bottom-up fill process, their surface adsorption rates, and their interaction. The determination of these parameters is difficult and consequently their value had often been estimated1. Electrochemical tests such as the injection technique have been used to provide adsorption constants with limited accuracy1. More accurate data can be extracted from experiments using more complex devices such as electrodes embedded in millifluidic channels2,3; however, even these provide only limited accuracy due to overlap between some of the fitted parameters3.  Consequently, although fairly sophisticated analytical models have been developed, their application has been limited by the unavailability of essential parameters. We introduce here a simple method, based on co-injection experiments, that easily provides parameters that heretofore had been proven inaccessible.

The co-injection technique involves the simultaneous injection of a suppressor and an anti-suppressor into copper plating electrolyte (‘VMS’), from which copper is being plated at a constant current onto a rotating disk electrode (RDE). This technique more closely resembles the wafer insertion into a plating bath during manufacturing, where the wafer is exposed to a solution containing all additives at once, than the more commonly used sequential injection1,5. Co-injection of PEG and SPS indicates a maximal polarization that depends on the rotation rate of the disk electrode as shown in Fig. 1(a). Modeling the co-injection process provides a voltage transient that can be fitted to the experimental results by adjusting the process parameters. As noted in Fig. 1(b), excellent fit is obtained to the maximal polarization at the different rotation speeds. The fit of the depolarization trace is not as good since this region is possibly associated with experimental mixing effects that are not accounted for in the model.

We find that previously reported diffusivities, saturated surface coverages, and SPS adsorption rate constant are consistent with the co-injection process model and experimental data, however, the PEG adsorption rate constant (kPEG) and the PEG displacement by SPS rate constant (kSPS,PEG), which previously have not been determined accurately, were adjusted to provide a good fit. The newly derived values are 10 cm/s and 2.6 x 10-6 cm/s for kPEG and kSPS,PEG, respectively. The complete parameter set had been applied to a comprehensive via fill model providing results that are consistent with experimental observations5. 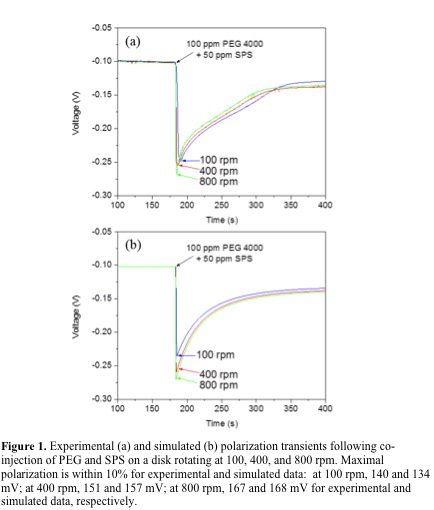