Expo Center, 1st Floor, Universal 13 (Moon Palace Resort)
S. Jin (Hanyang Univ.) and B. Yoo (Hanyang University)
TSV interconnection was widely investigated for next generation integrated-circuit(IC) which has significantly innovated function, excellent performance and high efficiency. Especially, TSV filling process by Cu electrochemical deposition occupied almost 40% of cost in the total TSV process. Therefore, a plenty effort has been put into decrease the processing time and prevent the formation of defects such as void or seam which could cause critical electrical and mechanical problems in the device. In the past, TSV filling studies were mainly focused on the function of chemical additives or bottom-up filling mechanism. In these kinds of researches, TSV filling process window was extremely limited because the applied current in the electrochemical process was a simple direct current or a constant voltage condition. Therefore, TSV filling by electrochemical deposition with pulse current was reported by our group for achieving the extensively wide process window. In this study, TSV filling by electrochemical deposition with pulse-reverse current was carried out for achieving even more extended process window.

Electrochemical deposition experiments were carried out in the 1 M CuSO4 electrolyte with suppressor and accelerator. TSV (diameter: 6 μm, depth: 60 μm) coupon sample and Pt electrode was used as working and counter electrode, respectively. Pulse-reverse current was consisted with the peak current (ipeak) and the reverse current (irev) that applied during the on time (ton) and the reverse time (trev) period, respectively. (figure 1) During the on time and reverse time period, deposition and dissolution of Cu was occurred, respectively. The average current (iavg) could be calculated by equation in the figure 1. Peak current density and on time used in this study was fixed to 450 mA/cm2 and 2 μs, respectively. Vertically filled shapes of electrodeposited TSVs were observed by optical microscope (OM). Through achieved images, “bottom-up filling ratio” and “side wall growth ratio” was calculated for analyzing the TSV filling performance.

Figure 2a shows the effect of reverse current density. The average current density and processing time was fixed to 2 mA/cm2 and 15 min, respectively. Bottom-up filling ratio was decreased with decreased reverse current. However side wall growth ratio was increased. These results were mainly caused by following reasons. Desorption of suppressor on the side wall during the reverse time was accelerated by increased reverse current. Even the ion depleted layer might be thicker due to decreased anodic current efficiency during the reverse time. Insufficiently relaxed ion depleted layer caused increasing the peak overpotential during the on time period. High overpotential caused accelerating the desorption rate of suppressor. Therefore, inhibition effect on the side wall was decreased, and thicker side wall was formed. Bottom-up filling ratio was naturally decreased because diffusing cupric ions from the top to the bottom of the via was preferentially consumed on the side wall. 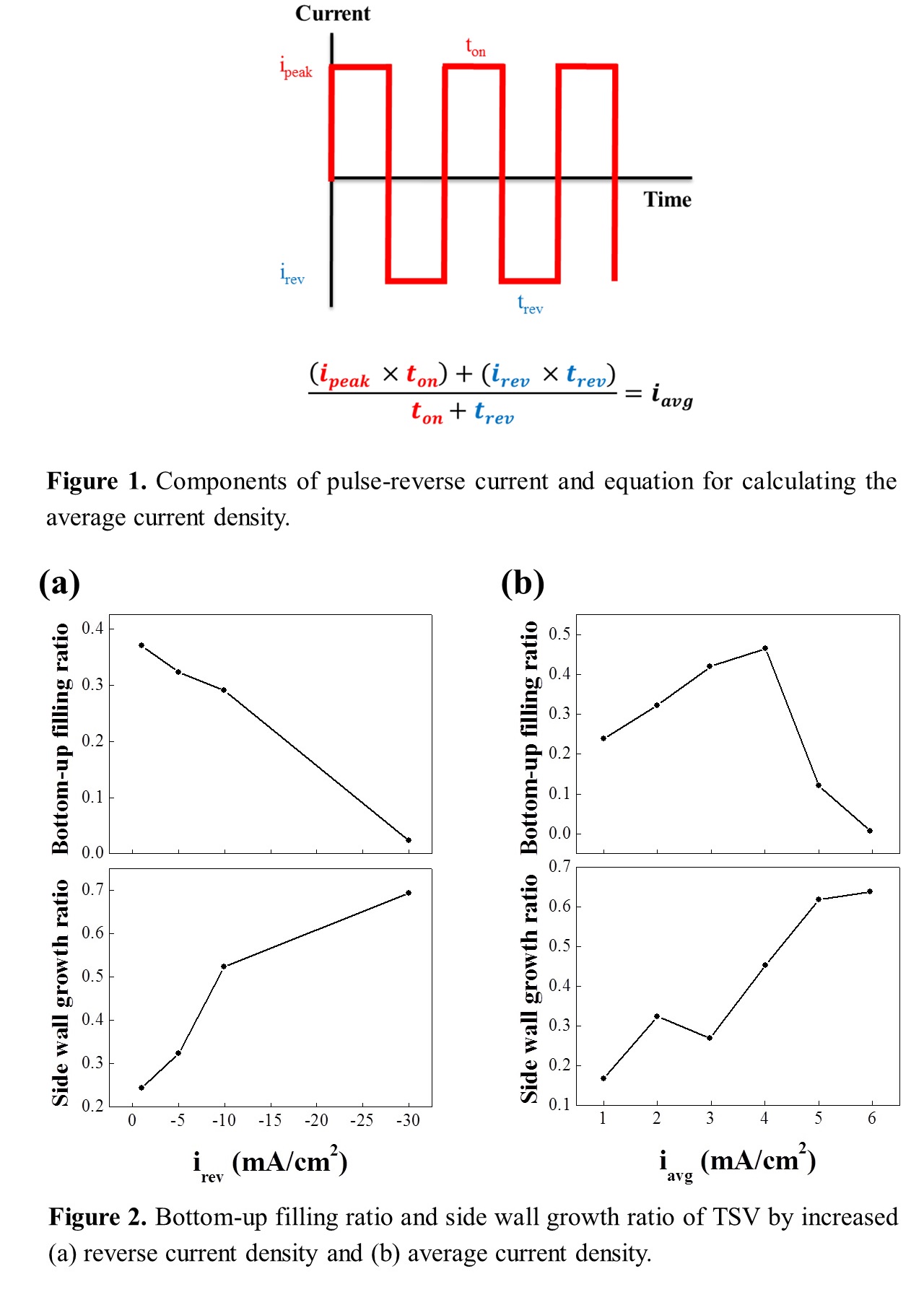