In this paper we report on epitaxy mechanism and role of hydrogen in achieving high crystal quality growth using ultra-high-vacuum PECVD technique. Silicon epitaxial layers were grown at 250-350oC with low plasma power density (PPD) of 20-100mW/cm2. The experiments were done in high hydrogen to silane dilution ratio (DR) of 50, 30 and 100.

Our results show that conditions for growing epitaxial Si at low temperatures are very critical and dependent on one another. Under such condition, amorphous transition happens when plasma power and hydrogen dilution are not in balance. Combination of proper plasma power, hydrogen dilution and temperature makes an experimental space where silicon epitaxy is feasible. Presence of hydrogen on the surface is of high importance and might have a constructive or destructive role in epitaxy. Passivation of Si dangling bonds with two atoms results in shorter diffusion length of ad-species. However, presence of atomic hydrogen can reduce this number and enhance the ad-species mobility. Proper adjustment of plasma power results in sufficient production of abstracting radicals such as SiH3 and H while the surface is not bombarded with high energy radicals.

Fig. 1a depicts the transmission electron microscopy (TEM) image of the highest film quality sample that is grown at 50 mW/cm2 PPD and DR of 30. Nucleation at substrate/film is initiated so perfectly that it is very hard to find and discern the interface (Fig. 1b). This has resulted in elimination of proposed nucleation step  needed for higher quality growth [5].  Consequently, no stacking faults and dislocations is developed in the film.  Crystalline to amorphous transition is not observed due to the absence of stress and saw tooth features (Fig. 1c).

Increased surface roughness and accumulation of hydrogen at dislocation centers are known as the reasons for epitaxy breakdown. These are attributed to high energy radical bombardment and atomic hydrogen etching of the surface. The atomic force microscopy images show that surface roughness of the epitaxial samples (0.136 nm) are comparable with bare Si substrate (0.128 nm) while it is higher for the broken epitaxy sample (0.187 nm). The hydrogen content measurement by Fourier transform infrared spectroscopy shows that high quality films have lower percentage of SiH and SiH2 bonds. The sample with broken epitaxy has 0.619% SiH and  0.696% SiH2. While the highest quality sample has only.024% SiH and 0.025% SiH2. These results show that epitaxy breaks if the growth condition is more towards domination of selective amorphous etching over surface diffusion enhancement. Therefore, surface diffusion enhancement has the major role in epitaxial growth mechanism at low temperatures. 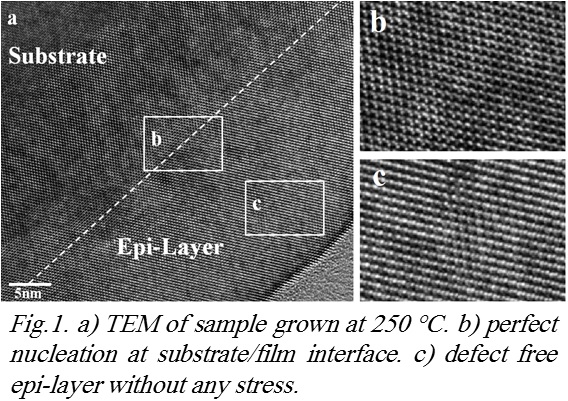