The photodetector is one of the main building blocks for the implementation of fast silicon photonics integrated circuits. The required considerations for the design of such a device are the bandwidth, the power consumption and the responsivity. Germanium is now considered as the ideal candidate for fully integrated receivers on SOI substrates and based on CMOS-like processes. High speed and high responsivity Ge photodetectors have already reported on literature [2-4]. However, they suffer from relatively high dark currents as compared to their III-V homologues. The increase of bias voltage directly leads to higher bandwidth but also to a higher dark current mainly through tunneling, as a consequence of Ge low band-gap. Furthermore, Ge on Si suffers from crystal defects due to the lattice mismatch between Si and Ge.

In this paper, we report on lateral pin photodiodes with thick Ge layers as the active media. Germanium is then integrated at the end of the Si waveguide, using the butt-coupling configuration to totally absorb light after few microns propagation at wavelength ranging from 1.3µm to 1.55µm (fig.1). Reliable detection characteristics have been obtained, including a bandwidth over 50GHz under zero-bias (fig.1), an internal responsivity higher than 0.5A/W at a wavelength of 1.55 µm and a dark current of about 10nA under -1V. 40Gb/s open eye diagrams were also obtained under zero-bias, showing the possibility of fabricating Ge-based low power and ultra-fast receivers. Some recent demonstrations of multiple-wavelength circuits and 40Gbit/s optical link, fabricated on a 300-mm microelectronics pilot line will also be presented {4]. 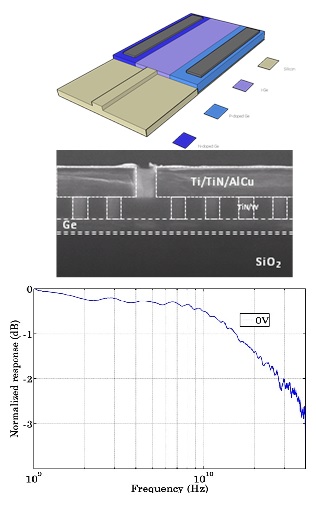