Thinning of the fin channel is a key technology for CMOS FinFET scaling. For sub-14nm- node FinFETs, the fin channel becomes thinner than 10 nm. Furthermore, lowering of the sheet resistance (Rs) in the source/drain extension (SDE) is essential for performance improvement [1]. However, in the case of conventional I/I, it is difficult to reduce Rs because conventional I/I generally causes poly-crystallization and/or crystal defects to be formed in ultrathin fin region, even after activation annealing [2, 3]. This problem is particularly severe for SOI FinFETs. Recently, a novel I/I technology called heated I/I has been proposed. By using the heated I/I technology, the crystallinity of the implanted layer for Si is maintained during heated I/I, and defect-free crystal can be realized by activation annealing [4, 5]. Furthermore, it has been reported that the Ion-Ioffcharacteristics are improved in bulk Si-channel nMOS FinFETs by heated I/I [6].

Both nMOS and pMOS SOI FinFETs were fabricated. (110) fin channel was formed on (100) SOI substrate. Doped-poly-Si/TiN/HfO2/SiO2 gate stacks were formed, patterned, and etched. SDE was formed by room temperature (RT) or 500oC I/I. As+ or BF2+ was implanted at 5keV with total doses of 2x1015cm-2. RTA was performed at 915oC for 2s. Finally, the back-end process was carried out.

To understand the crystal condition in the ultrathin fin region after heated I/I, we investigated the crystallinity of the SOI layer after RT and heated I/I by cross-sectional TEM observation (Figs. 1 and 2). The I/I was performed under the same conditions as those for the SDE formation in FinFETs (Figs. 1(a) and 2(a)). In the case of RT I/I, the SOI layer is fully amorphized by I/I (Fig. 1(b)), and polycrystals and twins are observed even after annealing (Fig. 1(c)). Since there are no seed crystals in the SOI layer after I/I, the implanted region cannot be crystallized by activation annealing. On the other hand, in the case of heated I/I, the crystallinity is maintained in the SOI layer after I/I (Fig. 2(b)). The crystal perfectly recovers by activation annealing (Fig. 2(c)). These results indicate that the defect-free SDE can be formed in ultrathin fin region by heated I/I.

Heated I/I contributes to the formation of the defect-free SDE in ultrathin fin region and is effective for improving the performance of ultrathin FinFETs. Thus, heated I/I technology is promising for SDE formation in future SOI FinFETs. 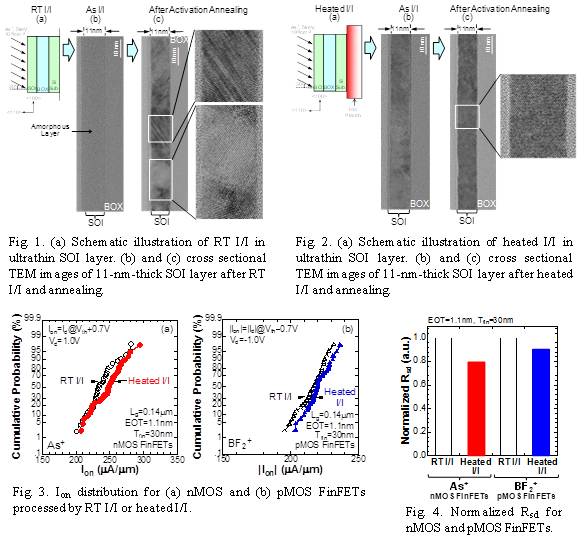