Russell A (Hyatt Regency)
Y. L. Zhu (Beijing Institute of Technology), Y. Katayama (Keio University), and T. Miura (Keio University)
Nickel is one of the important constituents for such functional materials as decoration, corrosion- and heat-resistance and magnatic alloys [1,2]. Electrodeposition method has been shown to be a good way to prepare nickel and nickel-based alloys since it has low cost, low requirement and rapid deposition rate [3]. Much interest in the electrodeposition from ionic liquids is due to the fact  that there is no hydrogen evolution in these electrolytes in addition to the advantages of their wide electrochemical potential windows, high thermal stability and negligible low vapor pressure [4-6]. The electrodeposition of Ni has been mainly studied in acidic chloroaluminate [7,8] and pyrrolidinium ionic liquids [9]. The crystal morphology of the deposit is different from each other. Especially the difference in the crystal size is significant, probably due to the different adsorption ability of cations on the substrate and/or Ni deposit [9]. In this paper, the effects of the cations of 1-ethyl-3-methylimidazolium (EMI+), 1-methyl-propylpiperidinium (PP13+),  and 1-butyl-1-methylpyrrolidinium (BMP+) on the electrochemical process of Ni(II)/Ni were investigated in room-temperature ionic liquids containing bis(trifluoromethylsulfonyl)amide (TFSA-).

The UV-vis spectra showed that the changes in cations have little effect on the solvation structure of Ni(II) in TFSA--based ionic liquid although the molar absorption coefficients in each electrolyte are different. In these ionic liquids, Ni(II) is considered to be octahedrally coordinated by three TFSA- anions.

The typical cyclic voltammograms of a Pt electrode in EMITFSA, BMPTFSA and PP13TFSA containing 0.05 mol dm-3 Ni(TFSA)2 are shown in Figure 1. The cathodic peak potential in each ionic liquid was close to one another probably because the coordination environment of Ni(II) is the same in these three ionic liquids. The difference in the cathodic peak current densities reflects the difference in the viscosity of the ionic liquids [10-12]. The order of their viscosities is: EMITFSA < BMPTFSA < PP13TFSA. Thus, the order of the cathodic peak current densities becomes: EMITFSA > BMPTFSA  > PP13TFSA, as seen in Figure 1.

The authors gratefully acknowledge the financially support of the Japanese Government (Monbukagakusho) Scholarship and the National Natural Science Foundation of China (Grant No. 51304024). 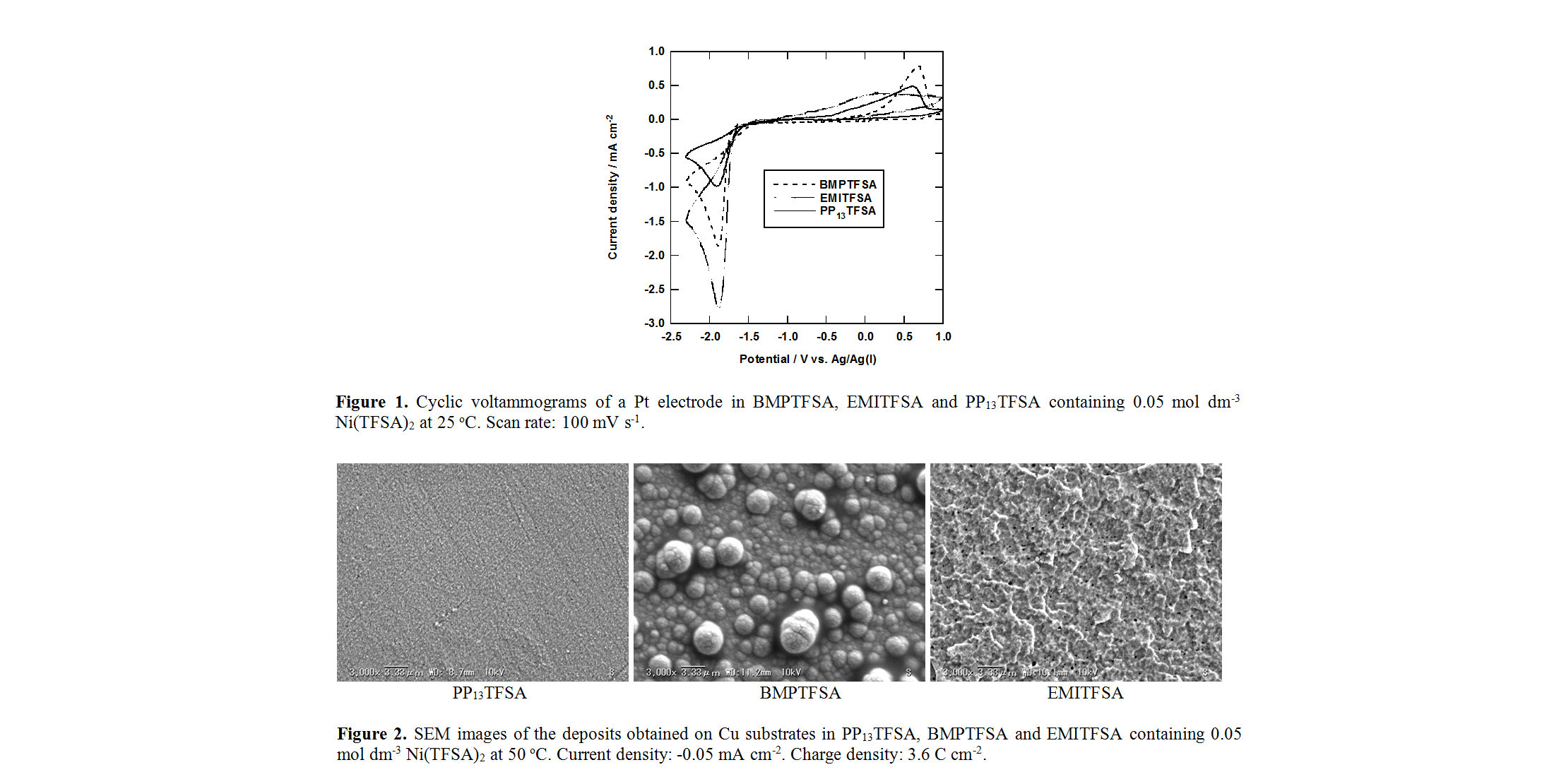