Russell A (Hyatt Regency)
M. Fayette (National Institute of Standards and Technology, Theiss Research), U. Bertocci (National Institute of Standards and Technology), and G. R. Stafford (National Institute of Standards and Technology)
The electrodeposition of Cobalt1-3 thin films has attracted much attention in recent years owing to its uses in both magnetic recording as well as alkaline fuel cell catalysis.  The evolution of residual stress during thin film growth is complex, having dependence on the microstructure, growth conditions, and material parameters. However, numerous studies have led to a better understanding and mechanisms of residual stress are beginning to emerge. During film deposition, stress is small in the initial stages, eventually becoming tensile during the coalescence of nuclei into a continuous film. However, as films become increasingly thicker and the height becomes more uniform, the stress often assumes a constant steady-state value. Models have been developed that treat this steady state stress as a competition between the tensile and compressive stress generation mechanisms that are governed by atomic mobility, microstructure, and deposition rate4.

In this study, the stress was measured with optical wafer curvature techniques that can be used during electrodeposition to determine real-time stress. The measured curvature is proportional to the product of the average biaxial stress (stress-thickness product) and the film thickness vis-à-vis the Stoney equation. Figure 1 shows a cyclic voltammogram (CV)/ stress thickness curve for the deposition of Co on (111) textured Au in 0.1 M NaClO4 + 0.001 M Co(ClO4)2.  The CV shows a small peak at -1.0 V, due to the reduction of H+ on the Au surface followed by the reduction of Co at -1.2 V, with increasing overpotential eventually leading to HER due to H2O reduction.  The anodic crossover on the return sweep occurs at a potential of -1.08 V, which is presumably close to the equilibrium value of -1.03V.  The accompanying stress curve shows that prior to Co reduction, there is a slight increase in the tensile stress owing to electrocapillarity as well as the desorption of ClO4- from the Au surface.  Upon the initial reduction of Co, the stress initially becomes compressive (about -0.2 N/m) before turning back to the tensile direction.  The negative electric charge associated with the peak in the compressive stress is about 500 µC/cm2.  Considering a 2-electron reduction process, this corresponds to less than 1 monolayer of cobalt metal, assuming that 590 µC/cm2 is required to deposit an incommensurate close-packed monolayer   The stress-thickness reaches a maximum of ~ +1.5 N/m under cathodic scan.  It is interesting to note that little stress change is observed at potentials more negative than -1.4 V, reflecting the very low faradaic efficiency for Co deposition once H2O is able to be reduced. On the reverse sweep, additional tensile stress (+3.25 N/m) is produced until dissolution of Co occurs further along the anodic cycle.  This talk will examine the nature of the stress generation in Cobalt electrodeposited films with focus on overpotential and structure. 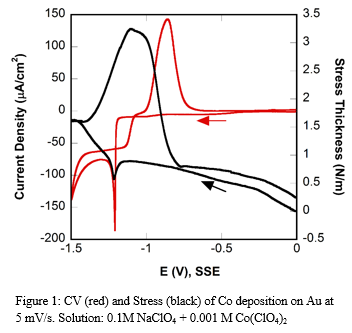