103-B (Phoenix Convention Center)
H. Shimawaki (Hachinohe Institute of Technology), M. Nagao (National Inst. of Advanced Industrial Sci. and Technol.), Y. Neo (Shizuoka University), H. Mimura (Shizuoka University), F. Wakaya (Osaka University), and M. Takai (Osaka University)
The electron source generating density modulated electron beam (a train of electron beam pulses) at high frequency directly from the cathode surface has attracted significant interest since they could be used in a wide variety of vacuum electronics devices, such as compact microwave sources [1-4], ultrafast electron microscopy [5], or electron beam lithography [6]. In particular, bunching the electron beam at the cathode surface can not only dramatically reduce dimensions and weight through the elimination of the pre-modulation circuit, but can also provide extremely high efficiency and improve power in electron beam devices due to coherence effects.

The high-frequency modulation of the gate potential of field emitter arrays (FEAs) has been proposed and studied for microwave tube applications [1]. However, challenges resulting from parasitic capacitances have still remained [7]. An alternative is producing electron bunches by optical means. The emission current from p-type semiconductor field emitter arrays, unlike metals, is limited by the supply of minority carriers (electrons) in the depletion region in the high field, and is, therefore, highly sensitive to the additional supply of photoexcited carriers. Several studies have revealed the transient photoresponse of p-type Si-FEAs was limited by diffusion of photogenerated electrons outside the surface depletion region in the tip [8-10]. To generate a high frequency modulated electron beam, we need to design the emitter structure which eliminates photoexcitation of carriers outside the depletion region. In this paper, we descuss the photoresponse of volcano-structured p-type Si-FEAs fabricated by etch-back technique, where the gate metal effectively prevents photoexitation of carriers outside the depletion region, under laser light illumination.

Our Si-FEA devices tested here consist of 100 emitter tips, a gate aperture of less than a half micrometer in diameter and insulating layer of 200 nm thickness, as shown in Fig.1. In a proof-of-principle experiment, the FEA device was optically modulated from the front side. Figure 2 shows the typical current-voltage characteristics of our FEA device with and without laser pulse illumination of a wavelength of 405-nm. This result clearly suggests our device is a highly sensitive photocathode. In the dark, the emission current saturation by limitation in supply of electrons at high voltages is clearly displayed and the irradiation enhanced the emission current. Figure 3 shows the response of optically modulated emission current from our FEA device and a reference commercial photodetector. The rise and fall times of each pulse response are 5 ns, respectively. These values are similar to the minimum rise time of the current-voltage conversion amplifier used in this experiment, so the measured rise and fall times are determined by the response time of the current amplifier and the real rise and fall times of photoresponse in the device are at least less than 5 ns. A delayed slow response in the falling phase is not included in the component of the transient signal. Although optimization of the FEA structure is underway, it is experimentally demonstrated that the FEA photocathode is a structure suitable for minimizing the photogeneration of electrons outside the depletion layer, giving a high-speed modulated electron beam [11]. 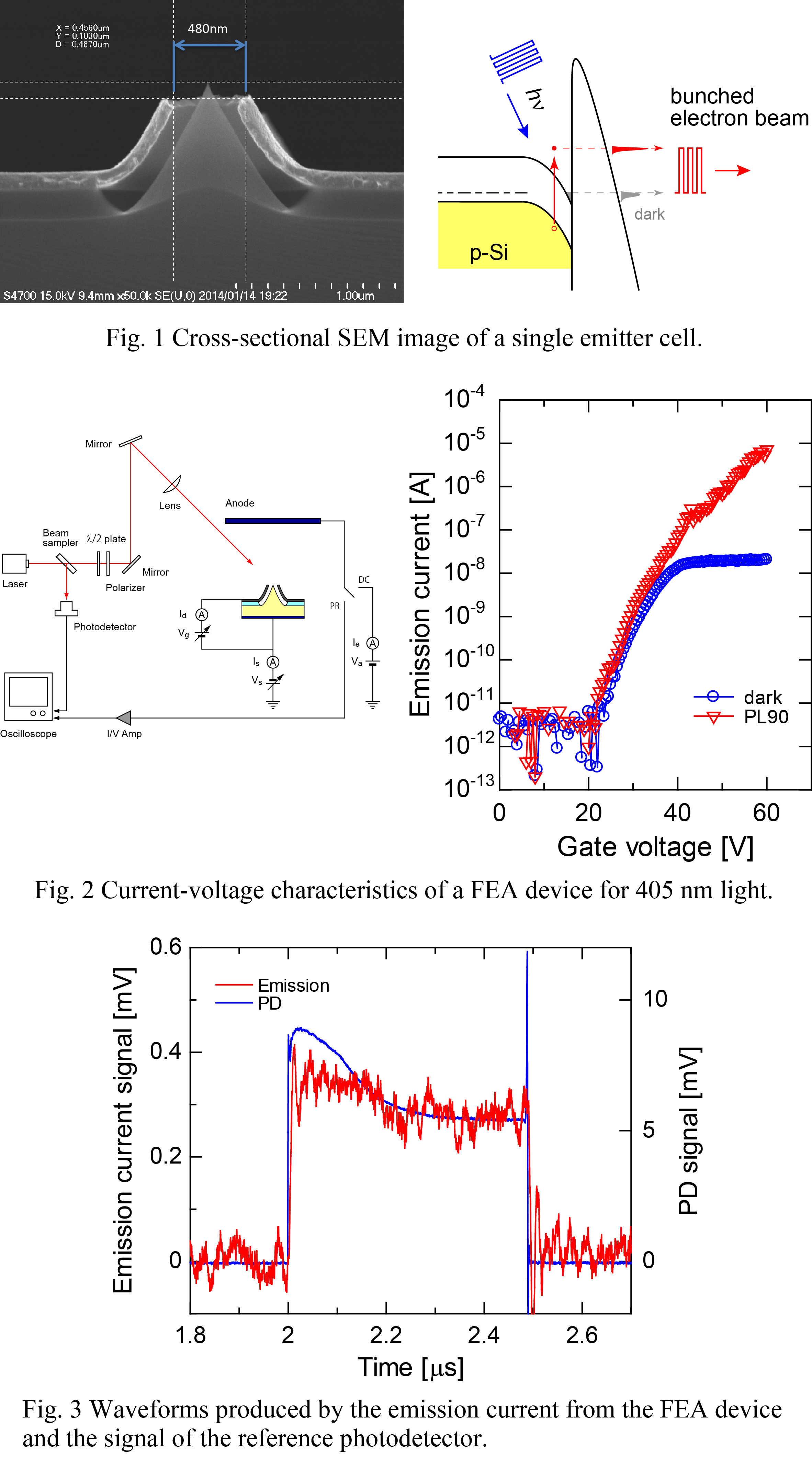