H2-based plasma process has been controversial for a long time as it’s reported the high H2-based plasma could result in device instability [1]. In this work, we investigated various H2 related etch processes in advanced logic technology from the point of view of selectivity, defect, reliability and yield performance. Due to the chemi-sorption and recombination of H atom at Si [2], high temperature(>250℃) H2 remote plasma can be used to minimize the material loss for process where oxygen is forbidden, while and low temperature(<60℃) H2-based plasma process can be used in Si/oxide related etch processes with the improved selectivity to either mask or stop layer. Nevertheless, the low temperature H2 plasma directly contacting the exposed metal might result in plasma damage such as PID (plasma induced damage).

Low temperature H2 can be used to etch Si or used as post etch treatment to remove the poly-si residue on ICP etcher.  In this work, we demonstrated the H2 based DPGR process could deliver  >50% gate leakage(Ig) improvement than conventional halogen gas etch process because of  less HK capping layer loss as shown in Fig4.

In ULK Metal Hard mask approach, we introduced H2 in via etch to achieve self-aligned Via. CxFy and H2 gas plasma delivered high selectivity between ULK and metal hard mask because H atom can decrease the F concentration in plasma. The via-via distance can be doubled with H2 implementation (Fig7). and this will benefit the time-dependent dielectric breakdown  reliability performance. 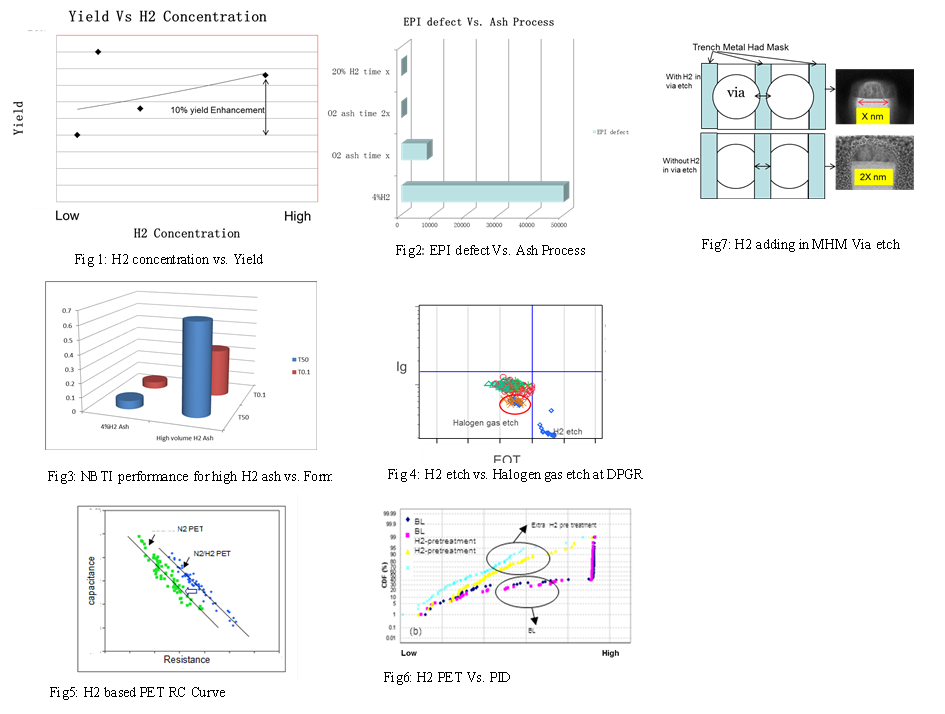