Borein A (Hyatt Regency)
J. C. Souriau, J. M. Herrera Morales, L. Castagné (CEA, LETI, MINATEC Campus, Univ. Grenoble Alpes), G. Simon (CEA, LETI, MINATEC Campus, Univ. Grenoble Alpes), K. Amara (Sorin CRM SAS), and B. Boutaud (Sorin CRM SAS)
Facing demographic aging and surging demand for advanced healthcare, the global market for active medical devices has greatly expanded these last years. Furthermore, microsystem improvement in term of miniaturization offers new perspectives for medical applications. Gradually the electronic devices that were previously external invade the human body in order to improve therapy or physiological parameter measurements. However, biological medium is a new environment for such devices and the packaging has to be reconsidered taking into account new constraints. First of all it is essential to preserve the human body from toxic elements exposure that are usually present on silicon devices such as Cu or Al. Moreover, for functionality and reliability aspect it is also crucial to preserve electronics parts from corrosive substances which constitute the major part of the body.

The objective of this paper is to present new strategy of packaging developed in the CEA-LETI for medical applications which include a Micro Electro-Mechanical Systems (MEMS) accelerometer and an Application-Specific Integrated Circuit (ASIC) inside a hermetic silicon box that could be embedded in a cardiac lead in order to monitor the endocardial acceleration (fig1).

The electronic components are bonded on a wafer silicon interposer and covered by an additional silicon wafer which contain cavities. The wafer bonding is performed at the wafer level using eutectic AuSi solder. The gas content and hermeticity of the package were analyzed using Residual Gas Analysis (RGA) and the standard leak rate, which is assessed based on the formation of water droplet condensation in our package after 20 years, was estimated to ~6 10-13 atm.cc/s which guarantees a life time much more than 20 years.

The final silicon box is encapsulated with biocompatible materials that have high conformality deposition and act as good bi-directional barrier. Materials that had been reported in literature as biocompatible and compatible with fabrication in standard clean rooms were studied. These include Al2O3, BN, SiC, DLC(a-CH), HfO2, SiN, SiO2, SiOC, TiO2 and ZnO. Biodegradation tests were performed in phosphate buffer saline at different temperature. Changes in thickness and chemical composition were monitored by variable angle spectroscopic ellipsometry and x-ray photon electron spectroscopy. Non-cytotoxic test according to in-vitro tests outlined by the norm ISO10993-5 were carried out. Finally, Helium gas permeability measurements of selected packaging layers are also provided. 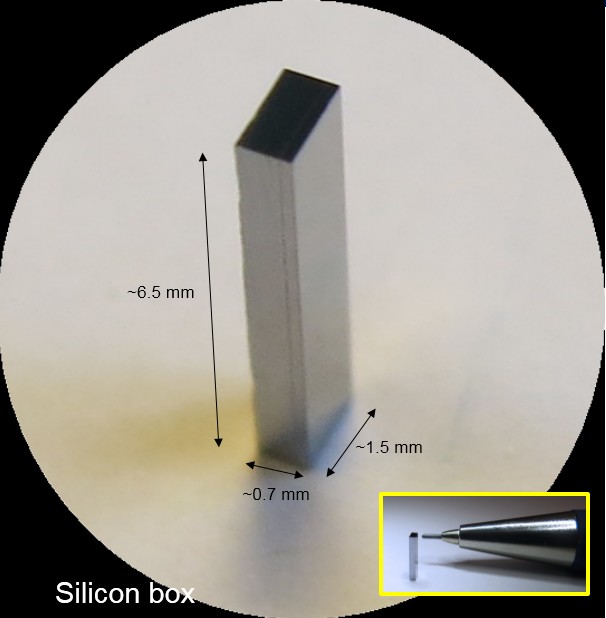