Borein A (Hyatt Regency)
S. I. Wen (National Chung Hsing University) and W. P. Dow (National Chung Hsing University)
Recently, a copper electroplating technique, namely butterfly technique (BFT) [1], was developed to achieve a void-free filling of a through hole (TH) of a printed circuit board (PCB). However, the BFT for TH filling caused an issue of thick copper layer on the PCB surface, which increases the process cost due to a requirement of post copper etching process. Literature has mentioned that copolymers have strong suppression on copper electroplating than poly(ethylene glycol) (PEG). The strong suppressor can minimize surface copper thickness to achieve excellent filling performance. In this work, we employ a copper filling formula to perform the TH filling. Several copolymers were employed as suppressors to replace PEG. The result shows that the surface copper thickness is decreased by using the copolymer. It can not only enhance the copper filling performance but also increase plating efficiency. 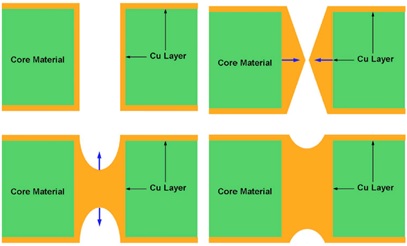