Since electrografting mechanism is initiated from the surface [2], P4VP material properties and kinetic growth can vary with the surface preparation of the TSV. Results obtained on TSVs, with various surface preparations, insulated by electrografted P4VP suggest that the polymer is not only a good dielectric, but could allow a reduction of the Keep Out Zone (KOZ) size for a higher integration density. Furthermore, as P4VP is a viscoelastic material, its Young’s modulus is temperature dependent and dramatically drops down above its glass transition temperature. Such a material is particularly interesting to reduce stress as it can act as a buffer stress layer.We will present the study of electrical and thermomechanical properties of the electrografted P4VP dielectric realized on high aspect ratio TSV. We will discuss the impact of TSV surface preparation on the electrografting process and on the material properties of the P4VP grafted layer. Results will be compared to more conventional approaches based on a silicon oxide insulator. Acknowledgement 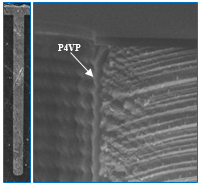