Atomic layer deposition (ALD) is a novel  process  to synthesize   variaous  thin films, where the sequential alternating vapor pulses of chemical precursors are introduced into the  ALD reaction chamber, one at a time. Each precursor pulse was separated by inert gas, such as Ar or N2. The excess precursors and reaction by-products were evacuated by vacuum pump from the ALD reaction chamber. The precursor is fully reacted with only one monoatomic layer on the reacting surface through a surface saturating self-terminationg process. Therefore, the ALD technique produces extremely uniform and conformal films in  atomic level thickness. In general ALD has been shown to be able to generate reproducible and well-defined thin films of binary oxides, nitrides, and sulfides.  In recent years  ALD has been used to deposit pure elemental metals, new types of ternary and quarternary materials.

In this work, we report on the synthesis of WO3 thin films on Si and quartz substrates by thermal ALD using a cross-flow reactor, with W(CO)6 and DI water as the chemical ALD precursors for tungsten and oxygen, respectively. This was followed by 600 oC furnace annealing in regular  atmosphere. Characterization of WO3 thin films has been performed using X-ray diffraction (XRD), field emission scanning electron microscopy (FE-SEM), atomic force microscopy (AFM), energy-dispersive X-ray spectroscopy (EDX), UV-VIS-NIR spectrometer, Raman spectroscopy (RS).

Figure 1 shows the XRD pattern of the ALD WO3 samples obtained after furnace annealing at 600 oC   under atmospheric conditions. All the diffraction peaks can be indexed into the monoclinic structure of the WO3 phase [space group: P21/n (14)], which is consistent with PDF 83-0950. 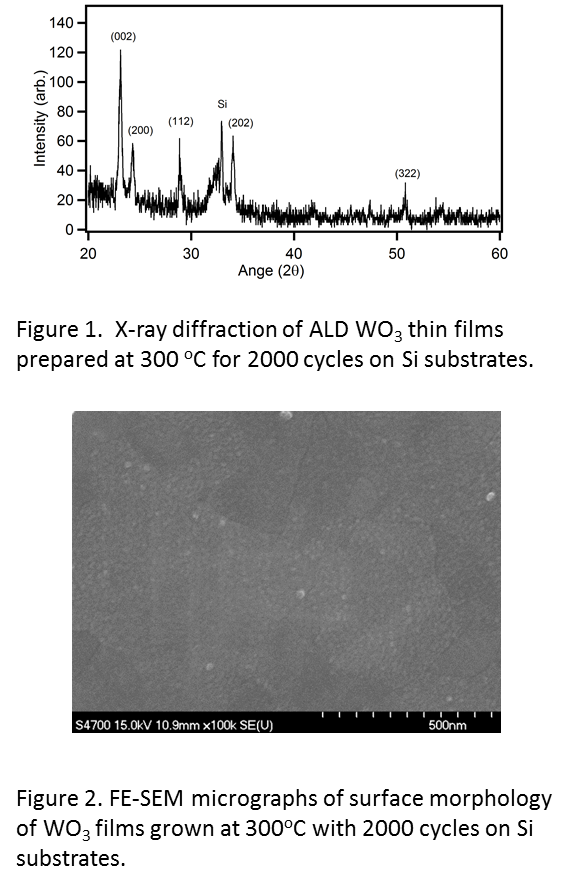