1800
Figures of Merit for the Assessment of the Electrocatalytic Activity of Electrode Materials for the Oxygen Reduction Reaction: A Critical Analysis

Grand Salon D - Section 19 (Hilton New Orleans Riverside)
N. S. Georgescu and D. Scherson (Case Western Reserve University)
The Oxygen Reduction Reaction, ORR, plays a key role toward the further development of fuel cells and other technological devices, and, as such, continues to receive significant attention for research groups all around the world. A common figure of merit to rank the electrocatalytic activity of various materials is the so-called, neff, which is regarded as a measure of the number of electrons transferred per dioxygen molecule reacted, with four being optimum.

Curiously, n­eff is defined across the literature primarily in two different ways. One such definition relies on measurements involving the rotating ring-disk electrode, whereby the disk is of the electrocatalysis being tested and the ring is polarized at a potential to reduce peroxide under diffusion limited conditions1, based on which

According to its proponents neff would range from 2 (when Iring = IdiskN) to 4 (when there is no measured peroxide at the ring). A discussion of the conditions under which Eq.(1) would be valid may be found in our recent publication group2, which include the neglect of any subsequent reactions associated with peroxide generated on the disk. The second definition is based on the slope of the reciprocal of current recorded at a rotating disk electrode, RDE, as a function of the reciprocal of the square root of the rotation rate, ω, assumed to follow Koutecky-Levich expression shown in Eq.(2) below.

where, once again, only dioxygen and NOT peroxide is assumed to react at the RDE, an assertion that must be validated before any conclusions can be drawn with confidence. In particular, if such an assumption is relaxed it can be shown that 1/i is given by the following expression: expression where the parameters k­d, k1, k2, and k3, are the rate constants of the processes in scheme, Left panel, Figure 1.

It thus follows that the slope of a linear fit of simulated data from Eq. (3) using Eq. (2) may not, in fact, be directly representative of the number of electrons transferred per dioxygen molecule reacted. For instance, it can be shown that if k1 = kd = 0 and 2 k3 = ξ k2, a Koutecky-Levich plot will yield a straight line with a slope corresponding to a value of n­eff = 4, even though the reaction proceeds strictly through the 2-electron pathway, and the surface is not particularly well suited for reducing peroxide either (see Figure 1, Right Panel). Because, based on Eq. (3), identical neff can be extracted from both purely 2 and purely 4- electron catalysts, and a purely 2-electron catalyst could have a measured neff of anywhere from 2 to 4, the reliability of this formalism at evaluating electrocatalysts is called into question.

This presentation will address these and other aspects of the ORR and develop more reliable figures of merits to represent the activity of electrocatalytic materials for this important technological reaction. 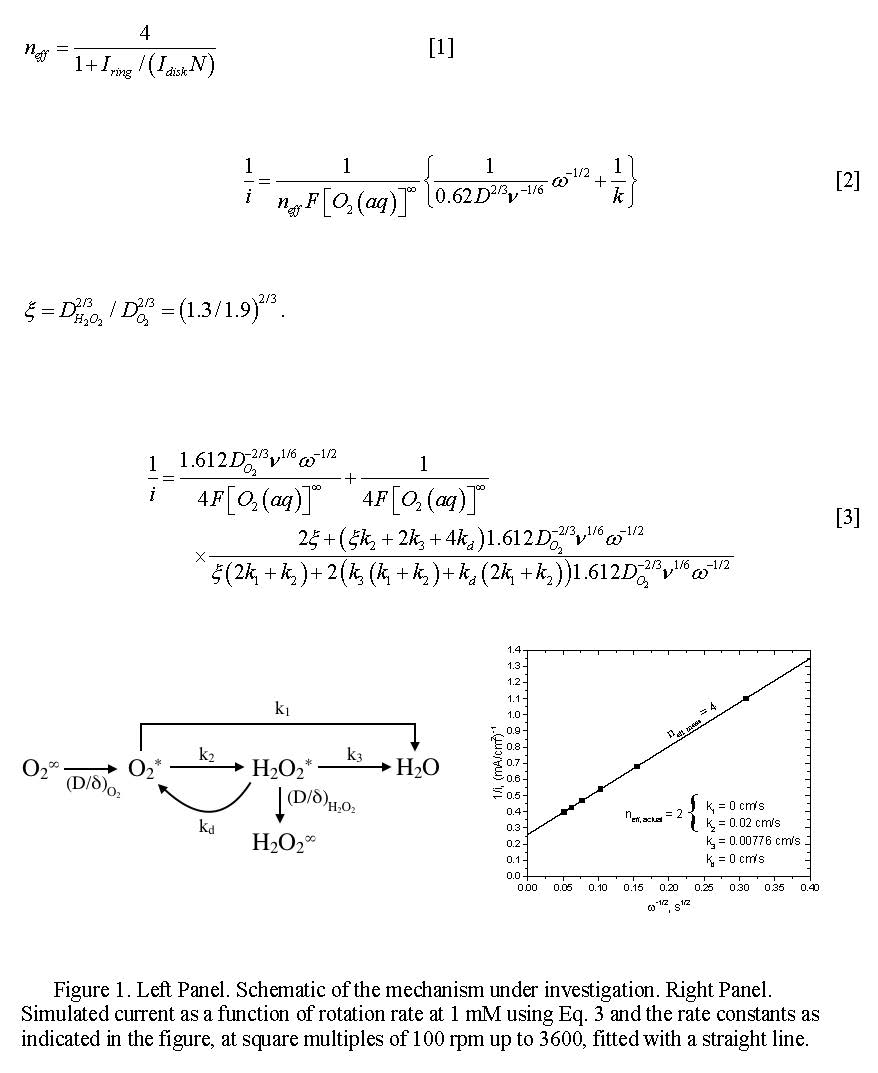