The cell consists of a hollow Teflon cylinder with a transducer. A three electrode system is used with the electrodes spaced equally apart and parallel to the cylinder base. The cylinder is filled with a redox probe and electrolyte solution such that a meniscus forms at the top. The transducer propagates sound waves through the solution (i.e., sonication). A comparison of cyclic voltammograms before, during, and after sonication reveals enhancement effects from the sound waves. For redox probes with slow kinetics, sonication simultaneously increases currents and appears to shift the reaction to more reversible. Data indicate that a combination of the height and shape of the meniscus play a vital role in this enhancement effect.

Numerical analysis is used in conjunction with partial differential equations to develop the model. It takes into account the shape and height of the meniscus as well as the pressure, density, elasticity, mass, and surface tension of the fluid near the meniscus. The model then reveals the standing waves of the system. Standing waves occur in a stationary medium when waves are traveling in opposite directions and cause interference with one another. In general, if this scenario occurs with waves of approximately the same amplitude there is no net change in energy, another indication that the height of the meniscus is relevant.

To help quantify this phenomenon, four equations are used. Among them are two common equations used in fluid mechanics, a conservation of momentum equation (Compressible Euler Equation), a conservation of mass equation, a boundary motion equation, and an equation that describes the surface tension on the meniscus. The boundary motion equation includes a term that describes the position of the surface. The Galerkin Method is used to convert our continuous problem to a discrete one via the weak formulation with a proper basis. A reduction of the wave equation to an eigenvalue problem gives way to our standing waves. The wave interference taking place in the cell can be seen the provided picture.

This model is important for prediction of behavior of the sound waves before and after they contact the top boundary and the role of the meniscus convexity. The model proves that the sound waves contact the meniscus and are then reflected back down into solution. Lastly, the model provides all possible standing waves in the cell. This will lead to advances in understanding the experimental system for applications in electrocatalysis. 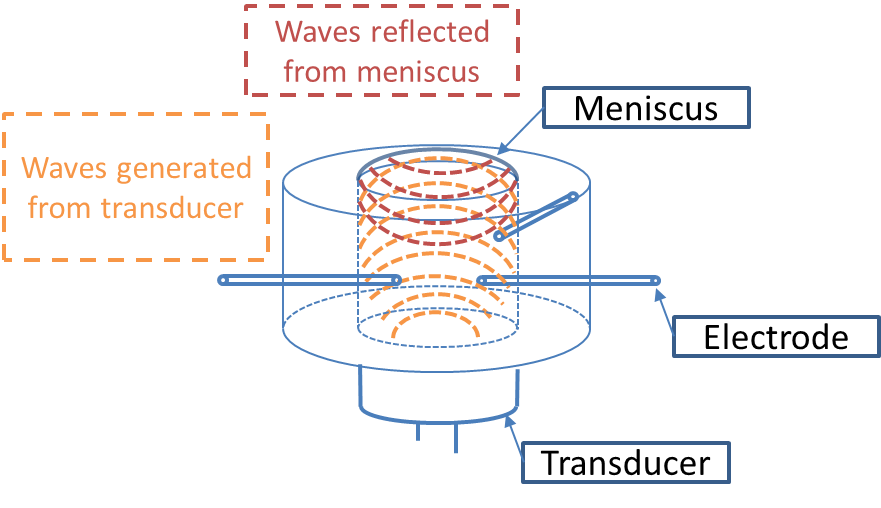