Taking benefit from SiGe band edge around 1550nm for low silicon content around 1% and its full compatibility with the standard CMOS technology, SiGe alloy is set to play a key role in integrated optic communication systems.

Here, we report the results of optical transmission band-edge tunability by means of rapid thermal anneal (RTA). The band edge shows a blueshift, with a tunability of up to 48nm. Therefore, this technique can be used for fine-tuning the optical proprieties in electro absorption modulators for wavelength division multiplexing (WDM) [2].

The experiment was performed on two different Silicon-on-Insulator wafers with different silicon overlayer thickness of 500nm and 800nm. The SiGe is grown selectively in silicon recesses etched on both wafers. While the trench surface is kept constant (50-by-50um), the trench depth is 400nm for the 500nm platform and 700nm for the 800nm platform. The trenches are used to selectively deposit 100nm of Ge seed layer first, followed by 330nm and 600nm of SiGe in the 500nm SOI and 800nm SOI platform respectively. The SiGe and Si are etched together to form waveguides. The waveguide cross-section for the 500nm platform is depicted in Figure 1.

Transmission spectra are then measured through the SiGe and normalised using a silicon normalisation waveguide to get the insertion loss (IL). The bandgap shift, was estimated using the standard Tauc method [3][4].

The measurements are summarized in Figure 2.

For the 500nm thick platform, two cells have been tested. The first cell has been annealed for 5min at 750⁰C, the resulting bandgap blueshift is about 23nm. The second sample, instead, has been annealed for 10min at 750⁰C, twice. After the first 10min anneal, the material bandgap is blueshifted by about 28nm, whereas after another 10min the bandgap is blueshifted by another 20nm. Hence, the total blueshift (20min anneal) is 48nm. Further anneal do not change the optical material properties, meaning that a shift-saturation is achieved.

In the second platform (800nm), two anneals have been performed on the same cell. After the first anneal (5min at 750⁰C) the material bandgap is blueshifted of about 15nm. The second anneal (10min at 750⁰C), instead, blueshifts the bandgap by another 25nm. The total blueshift is, then, 40nm in 15min anneal.

Composition studies are performed before and after anneal. After anneal, we measured a 100nm deep silicon migration from the SiGe alloy to the Ge-seed layer that agrees with results found in [5]. We, also, found that after anneal the material tensile strain increases in part due to the dislocations reduction [6].

The ability to fine-tune the material bandgap up to 48nm can be successfully used to fine tune the operational modulation wavelength of specific wafers whilst retaining the simplicity of only one epitaxy recipe. 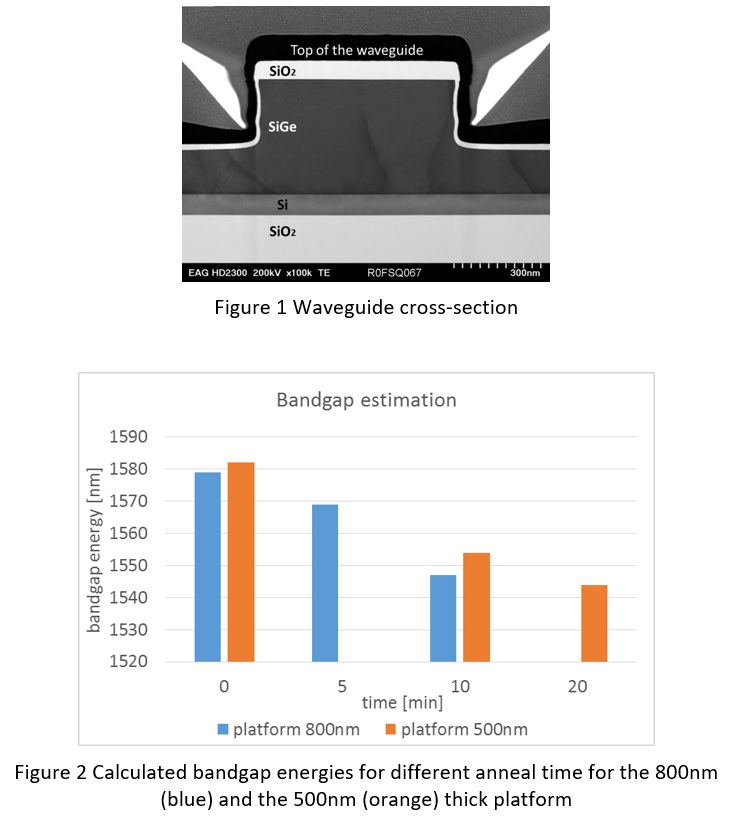