1482
Understanding the Role of the Micro-Porous Layer on Fuel Cell Performance Using a Non-Isothermal, Two-Phase Model

The use of a micro-porous layer (MPL) in fuel cells is known to improve water and heat management resulting in a better performance. Experimental evidence has shown that remarkable fuel cell performance improvements are still possible by modifying the MPL composition [2] and micro-structure, for instance, by milling holes [3]. In situ heat and water flux measurements conducted by Thomas et al. [4] showed that by inserting an MPL between CL and gas diffusion layer (GDL), the temperature in the electrodes increased by at least 1° C at high current density. The warmer electrode therefore, results in a higher evaporation which also facilitates the diffusive transport of water vapour by creating a higher concentration gradient. Based on experimental observations from the ex situ diffusive vapour flux and liquid permeation flux measurements as well as in situ electrochemical performance with varying MPLs, Owejan et al. [5] hypothesized the role of MPL is to prevent the condensed water in the GDL from forming a liquid film at the GDL/CL interface and creating an in-plane diffusive path for reactant. In their study, the thermal conductivity in porous layers demonstrated a significant impact on improving the performance by creating a higher temperature driven diffusive flux.

In order to understand the effects of MPL on capillary-driven flow and phase change induced flow, a multi-dimensional, non-isothermal, two-phase numerical model is developed in OpenFCST [6]. The porous media transport properties for two-phase flow are estimated using a micro-scale mathematical pore size distribution model [1] which is capable of accounting for the layer mixed wettabilities and micro-structure. Experimental validation of two-phase flow models is rarely performed even though it is of importance. In this study, the electrochemical performance of an MEA with a SGL 24BA and SGL 24BC is measured in our laboratory at varying operating conditions and also predicted using the numerical two-phase model. Membrane water transport, water fluxes in liquid and vapour form at cathode boundary, and the phase change induced flow are analyzed for studies with and without an MPL.

The performance analysis under hot/dry condition indicates that adding an MPL in the dry condition results in an excessive protonic transport loss in the membrane, especially at high current density. Under hot/wet condition, the additional heat preserved on the electrodes by adding the MPL leads to a substantial reduction in water accumulation. Simulation results at the cold/wet condition highlight that adding an MPL not only leads to a decrease in water accumulation in the electrode but also creates an in-plane diffusion pathway for gas transport in the cathode. The increase in temperature in the electrode also results in a decrease in relative humidity, especially at the anode. This leads to a higher membrane water content gradient between the fully saturated cathode and the anode which results in a higher back diffusion. 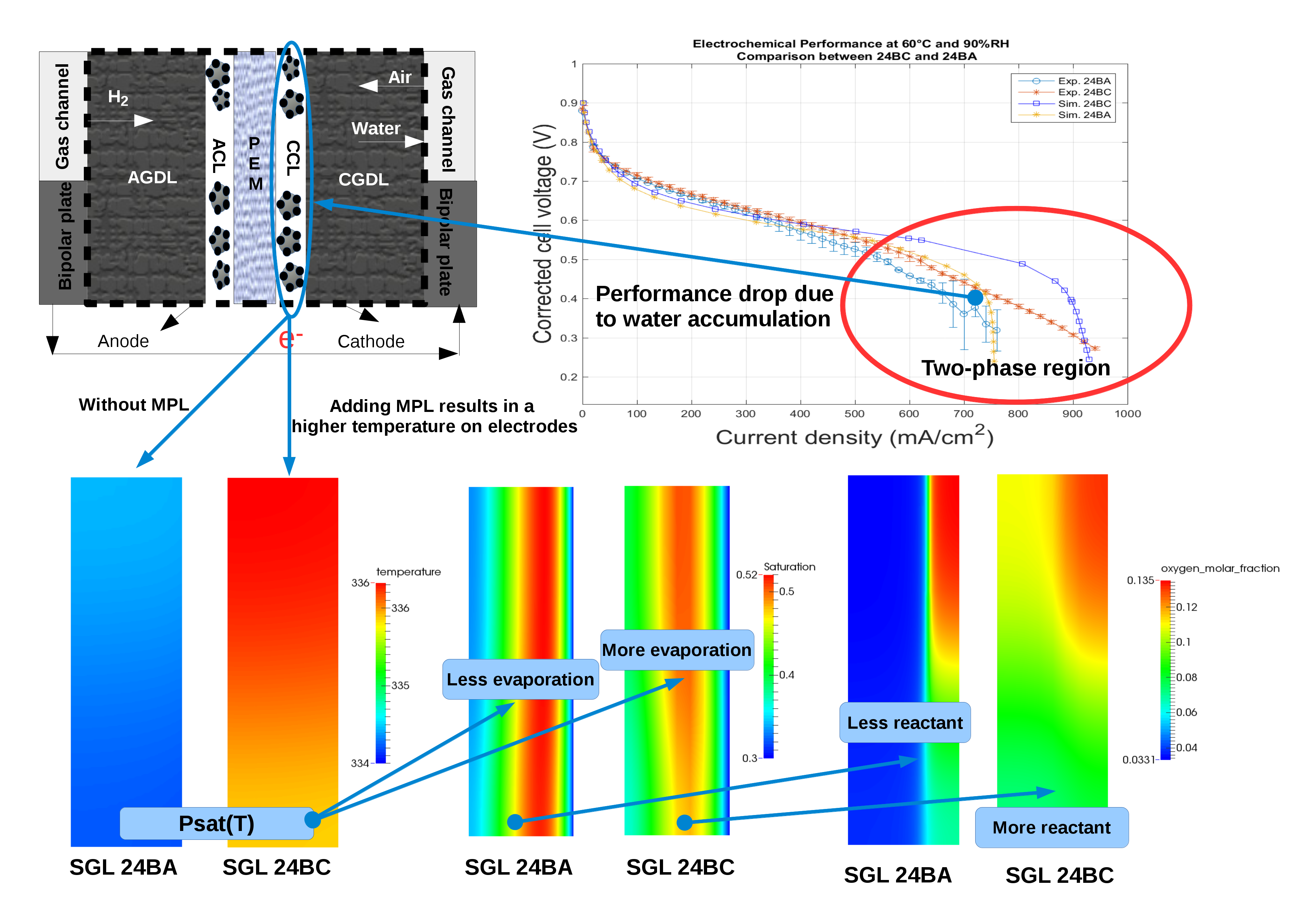