Grand Salon D - Section 19 (Hilton New Orleans Riverside)
M. S. Amrutha, M. Tirumala Rao, and S. Ramanathan (Indian Institute of Technology, Madras)
Zirconium and its alloys are widely used in chemical industries due to the high resistance to corrosion and H2 embrittlement in many aggressive media [1,2]. These properties are exhibited by the metal due to the formation of stable, protective passive film of ZrO2 [3]. Although Zr metal exhibits excellent corrosion resistance in most of the harsh environments, it readily dissolves in acidic fluoride media [4].

Zr dissolution mechanism in acidic fluoride medium was studied using the reaction mechanism analysis of potentiodynamic polarization data in various HF solutions [5]. A four step mechanism with two adsorbed intermediates predicts the major characteristics of the polarization curves. It was shown that the remaining HF and HF2- are the key species involved in the dissolution of Zr in acidic fluoride medium. The confidence in the reaction mechanism identification will be more if the model can predict the impedance spectra observed at different dc potentials in different concentrations of HF. Compared to the polarization data, which is obtained at the dclimit, EIS contains more information about the system since it is acquired in a wide range of frequencies.

In this work, Zr dissolution in HF was investigated using electrochemical impedance spectroscopy and the data was analyzed in the frame work of reaction mechanism analysis. A rotating disk zirconium electrode (5×4 mm) was used in a standard three electrode cell with Ag/AgCl (in 3.5 M KCl) as reference and Pt wire as counter electrode. PARSTAT 2263 (AMETEK) was used as the electrochemical work station and electrode was rotated at 900 rpm (Pine Instruments). The electrochemical impedance data was obtained by superimposing a small amplitude ac potential perturbation of 10 mV rms on the dc potential in a frequency range of 100 kHz to 0.1398 Hz. EIS measurement was performed on Zr dissolving in 10 HF solutions with 0.1 M Na2SO4 as supporting electrolyte. The EIS spectra was acquired at two different dc potentials in the active region (0.075 and 0.1 V vs. OCP) and at two different dc potentials in the passive region (0.5, 0.8 V vs. OCP). These dc potentials were chosen from the corresponding polarization curves. The morphology of the surface was analyzed using atomic force microscopy (AFM). Figure 1a and Fig. 1b shows the spectra observed in the active and passive region, in 10 mM HF. Impedance spectra in the active region show three loops with an inductive loop in the low frequency end. In the passive region, an inductive loop and a capacitive loop is observed in the mid frequency region and an apparent negative resistance and capacitance in the low frequency end. The observed EIS spectra were validated using Kramer's Kronig Transform (KKT). The spectra were modelled using electrochemical equivalent circuit (EEC) containing three Maxwell elements and the circuit parameters were calculated. A four step mechanism with two intermediates was able to predict most, but not all, of the major features observed in the impedance spectra. The number of Maxwell elements required to model the spectra indicate that at least one more adsorbed intermediate should be incorporated in the mechanism to explain all the features observed. 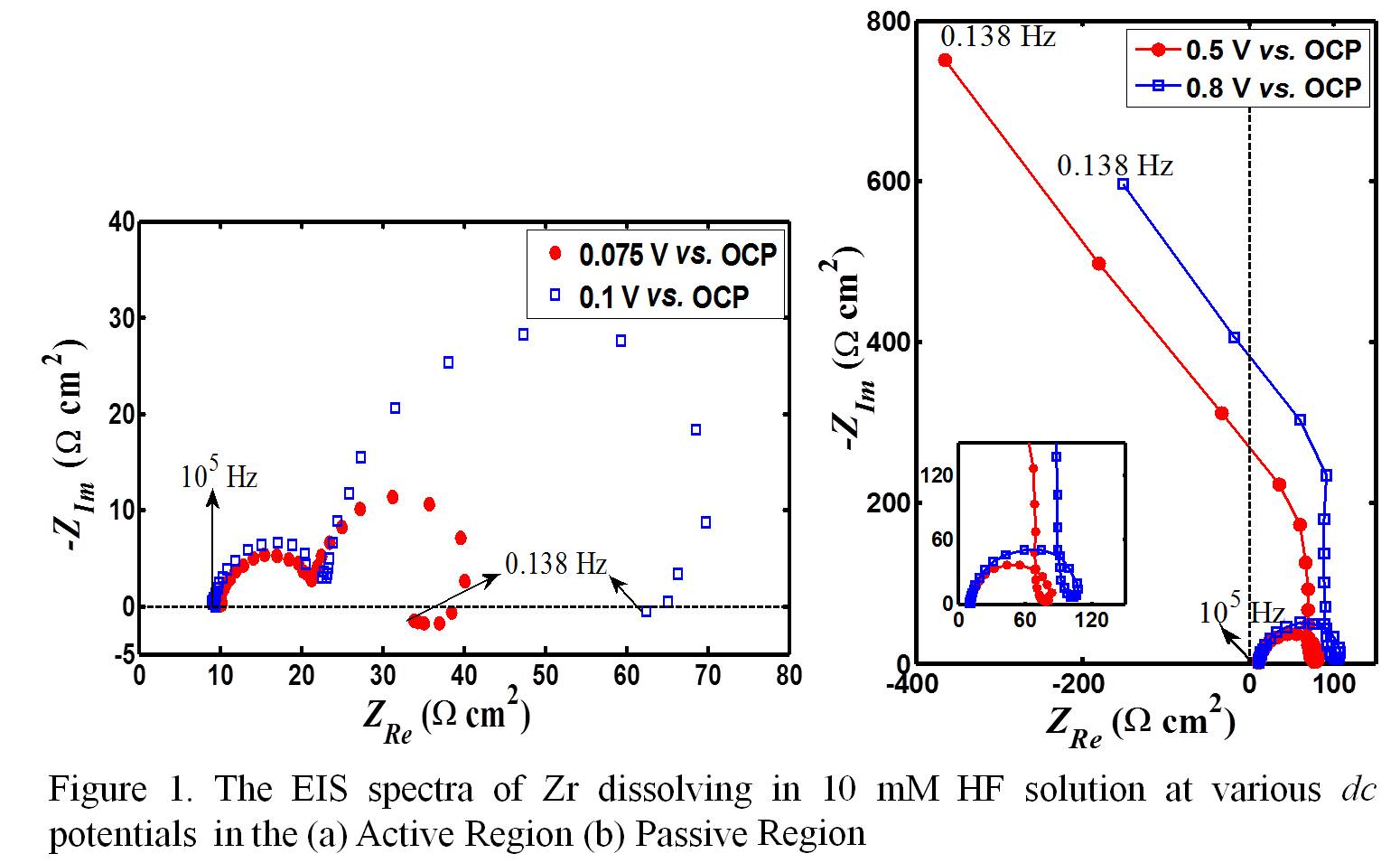