Grand Salon D - Section 19 (Hilton New Orleans Riverside)
J. Lu and D. P. Barkey (Chemical Engineering Department, U of New Hampshire)
Typical copper electroplating baths used for super-conformal electrodeposition of copper interconnects in submicron-scale vias or trenches on semi-conductor devices contain additives for control of current distribution. The additives operate through absorption and desorption at the metal-electrolyte interface where they regulate the copper deposition rate. In this paper, adsorption of the leveler benzyl viologen dichloride (BV) and its displacement by the accelerant 3-mercapto-1-propanesulfonate(MPS) in an acid-sulfate copper plating bath were studied by means of chronoamperometry. The measured copper deposition rate was taken to be the sum of current densities for surfaces fully covered by either BV or MPS weighted by the fractional surface coverage of each component. At constant potential, current-time curves were recorded during stepwise addition of additives. Figure 1 shows results for addition of BV to a solution that contained no MPS. These measurements provide an isotherm for BV adsorption. Similar measurements were made for stepwise addition of MPS to solutions containing a given concentration of BV to determine the fractional displacement of BV as a function of MPS concentration.

Results showed that BV adsorption and its replacement by MPS are both potential and temperature dependent. Both processes fit the Langmuir model well at low BV or MPS concentrations. The dependence of the Langmuir constant on temperature and potential were also measured. The temperature dependence of the constant indicates that adsorption is a spontaneous exothermic process and its displacement by MPS is a spontaneous endothermic process. 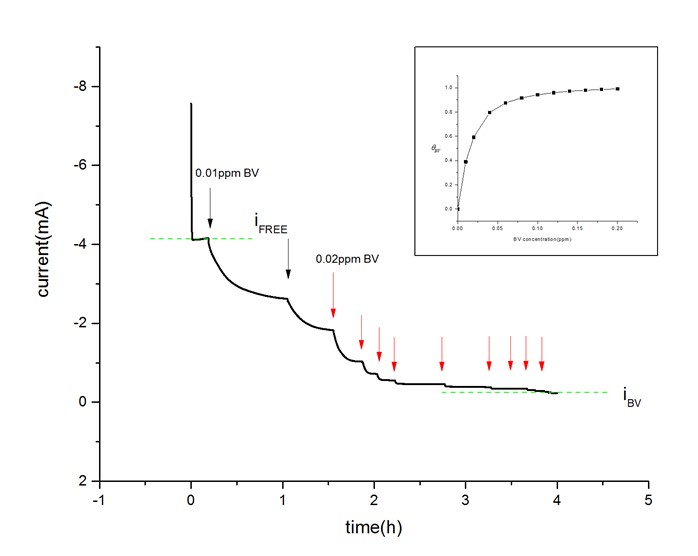