Grand Salon D - Section 19 (Hilton New Orleans Riverside)
J. Agrisuelas, A. Cuenca, J. García, and F. Vicente (University of Valencia)
The electrochemical deposition of copper has been extensively studied. In some experimental conditions, this electrodeposition represents the base of the calibration of the electrochemical quartz microbalances (EQCM). This technique allows the detection of intermediate species which are formed in the interfacial region, by measuring the F(dm/dq) function during electrochemical experiments. Furthermore, R-EQCM devices provides additional information on the deposited layers and the electrode/solution interfacial regions, by measuring instantaneously the motional resistance R of the equivalent Butterworth-Van-Dyke circuit.

This resistance could be almost considered as the sum of three different contributions as a first approach: Ro, due to the electrode (quartz/Au/Cu) system, RCu related with the Cu phase, and the RCu/solution associated with the Cu / solution interface:

This work explores the interpretation of this magnitude and its dependence on the nature of the interfacial region. For this purpose, the electrochemical deposition of copper as well as its anodic dissolution in acid sulfuric aqueous solutions were studied. .

Generally, measuring the resonance frequency, it is concluded that in the deposition and the anodic dissolution of copper, the instantaneous values of F (dm /dq) and F (D m/Dq) (measured in an interval of time) approaching 32 g·.mol – 1. This means that the overall reaction involves the transfer of two electrons per atom of copper. This is useful from a practical perspective: Both deposition and anodic dissolution of copper are suitable to calibrate the microbalance and for correcting the theoretical factor between mass and frequency that provides the Sauerbrey equation. However, although both processes have an efficiency near to 100 %, there is always a little hydrogen evolution which is manifested by a small increase of pH solution during the experiments of copper electrodeposition .

Since hydrogen gas at room temperature is slightly soluble in water, the production of hydrogen results in bubbles whose size depends on the medium composition and temperature which affect the surface tension. It is known that the rate of this process increases at higher cathodic overpotentials, which is able to generate superhydrophobic surfaces on metallic copper [2].

Due to the formation of hydrogen bubbles on the copper is the reason that the measure of the motional resistance shows periodic oscillations (Figure 1) and his period exceeds to the time of formation of successive copper layers during the electrochemical deposition. The relative maxima of these fluctuations should correspond to the hydrogen microbubbles leaving the electrode surface. The function dm/dt evolves parallel on time to the R value during the copper deposition. From the aforesaid results, it is inferred the great usefulness of the in situ measure of the motional resistance for obtaining information about the electrode/solution interfacial region.

The F (dm/dq), dm/dt function, and the appropriate measure of the motional resistance are useful to explain the interfacial differences that occur between the deposition and anodic dissolution of copper. The results points to the fact that the calibration of the Sauerbrey equation perhaps is better during the anodic process of dissolution than by means of an electrodeposition process, since during this last process, hydrogen bubbles are produced, whose kinetics can be followed by the oscillations of the motional resistance.The aforesaid results are consistent with the spectroelectrochemical measurements. 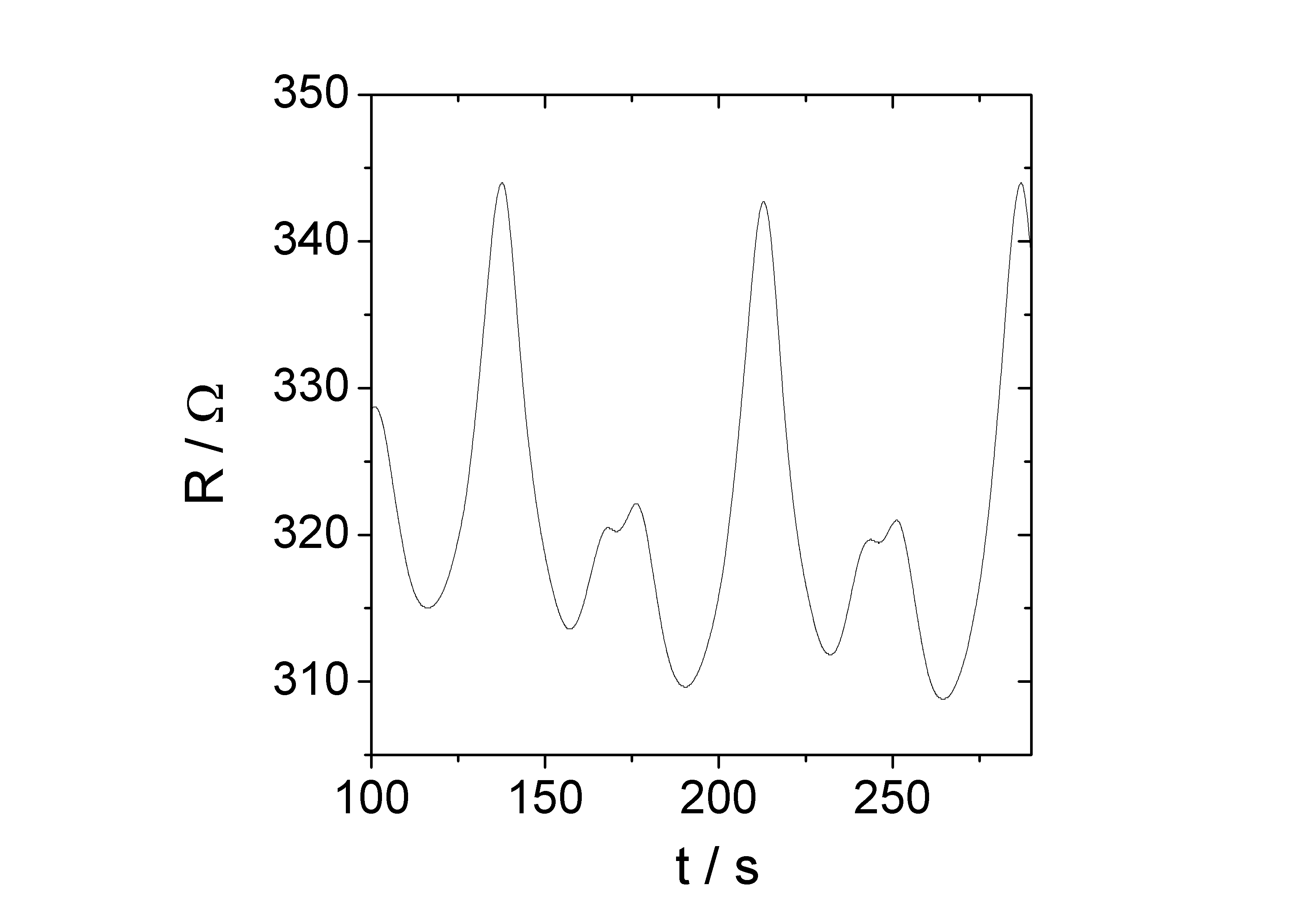