Grand Salon B - Section 7 (Hilton New Orleans Riverside)
Z. Liang, M. B. Vukmirovic, and R. R. Adzic (Chemistry Department, Brookhaven National Laboratory)
The ever increasing consumption of fossil-fuels for transportation causes climate change by emitting large amounts of CO2, a green-house gas, and a growing concern about future availability of fossil-fuels as energy sources due to their limited reserves. The concept of ‘CO2 neutral fuels’ based energy cycle can reduce our dependence on fossil-fuels and eliminate the detrimental effects of fossil-fuel consumption on environment. The principle of ‘CO2 neutral fuels’ based energy cycle is that the energy from renewable energy sources would be used to synthesize carbon based fuels from captured CO2 and such fuels are then used to power vehicles.

One of the products of CO2 electrochemical reduction is formic acid, which is used as fine chemical and a fuel in direct formic acid fuel cell. Therefore, efficient production of formic acid attracts a lot of attention in recent years [1]. It was reported that palladium and palladium based catalysts are very promising towards such process for lowered overpotential and improved selectivity as well as durability [2, 3]. Here we report high performance Pd monolayer catalysts for CO2 electrochemical reduction to formic acid. Pd monolayer catalysts were chosen in order to manipulate its activity toward formic acid production by their electronic interaction with the supporting core material. Cores with high electron affinity metal, the CO-Pd bond can be weaken thus to enhance the reaction kinetics.

Pd monolayer catalysts were prepared via Cu-UPD followed by Pd galvanic replacement [4]. Au@Pd/C and Pt@Pd/C showed improved activity and CO poisoning resistance compared to Pd/C catalyst via final product NMR analysis and CO-stripping experiment respectively. More detailed discussion on the origin of such improvement will be given on the presentation. Our work demonstrates the great potential of Pd-monolayer catalyst for CO2 electrochemical reduction reaction.

This manuscript has been authored by employees of Brookhaven Science Associates, LLC under Contract No. DE-SC0012704 with the U.S. Department of Energy. The publisher by accepting the manuscript for publication acknowledges that the United States Government retains a non-exclusive, paid-up, irrevocable, world-wide license to publish or reproduce the published form of this manuscript, or allow others to do so, for United States Government purposes. 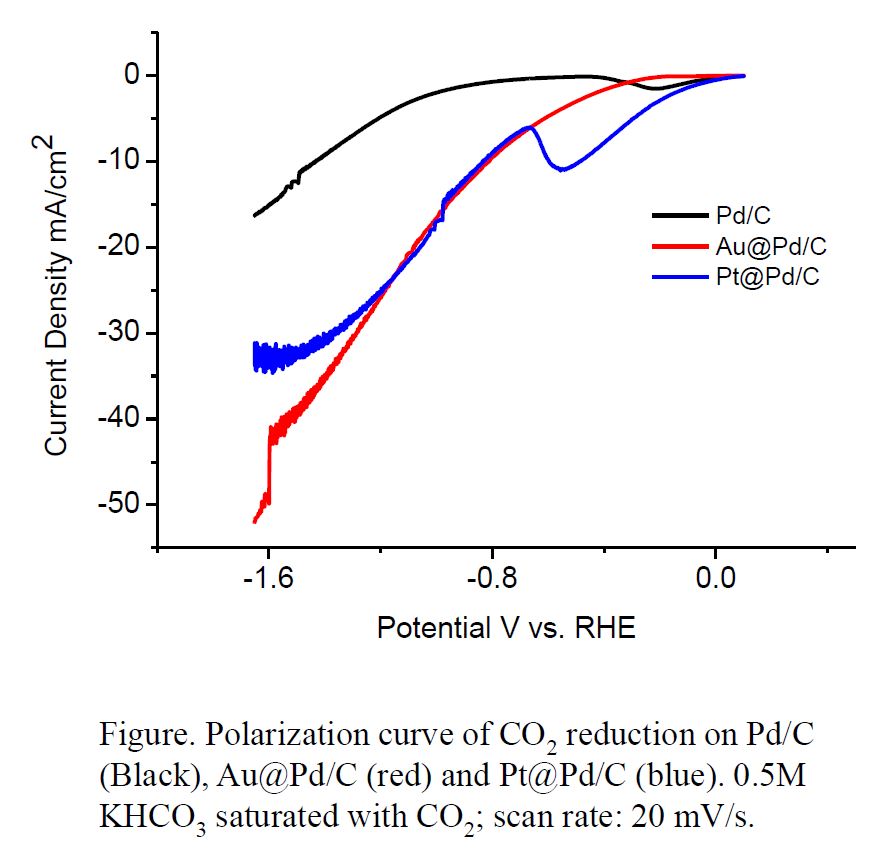