Grand Salon B - Section 7 (Hilton New Orleans Riverside)
M. Li (Brookhaven National Laboratory, Erachem Comilog Inc.) and R. R. Adzic (Chemistry Department, Brookhaven National Laboratory)
Many problems encountered in hydrogen-fuel-cell technology, particularly those of hydrogen storage and distribution, can be circumvented by replacing hydrogen with liquid fuels, such as methanol and ethanol. However, the electrocatalytic oxidation reactions of methanol and ethanol are slow and incomplete even on the best existing Pt-based catalysts, which greatly impeded the wide-spread application of direct alcohol fuel cell (DAFC).

Our group demonstrated that one class of surfaces can be very active for the oxidation of methanol and ethanol [1]. These electrocatalysts consist of one Pt monolayer (PtML) under tensile strain when placed on extended or nanoparticle surfaces. Their activity and selectivity can be controlled with Pt-support interaction. Our experimental and DFT studies demonstrated a correlation between the strain induced by PtML-support interaction and the catalytic activity. Significant enhancement in the activity associated with the tensile strain and decreased activity associated with the compressive strain.

Most recently, we deposited PtML on Au single crystals and shape-controlled nanocrystals enclosed with different crystallographic facets[1,2], and electrochemical behaviors (Figure 1a) suggested that the deposited PtML possessed facets matching to the underlying Au. Surface structure can determine catalytic properties and a large density of atomic steps on high-index facets is especially desirable for breaking chemical bonds such as C-C bond splitting in ethanol total oxidation. Such property of translating facet-specific features from substrates to the supported PtMLopens new opportunities to enhance catalytic performances.

Another approach to improve activity involves modifying PtML surfaces with different co-catalysts. For example, Ru modified PtML/Au showed significantly enhanced activity for methanol oxidation and FTIR studies demonstrated that no adsorbed CO was formed during the reaction. The incorporation of co-catalysts such as Rh, Ir and Sn with PtML shifted onset potential of ethanol oxidation to more negative values (Figure 1b) and promoted a complete oxidation of ethanol to CO2.

Details of electrochemical, structural and spectroscopic studies, discussion of reaction mechanisms and possibilities of these findings to resolve the major impediment hindering the development of practical DAFCs and to open new studies of C-C bond splitting in variety of important reactions will be presented in the meeting.

This work was financially supported by the US DOE, Office of Basic Energy Science, Material Science and Engineering Division, Division of Chemical Sciences, Geosciences and Biosciences Division (Contract No. DE-SC0012704). 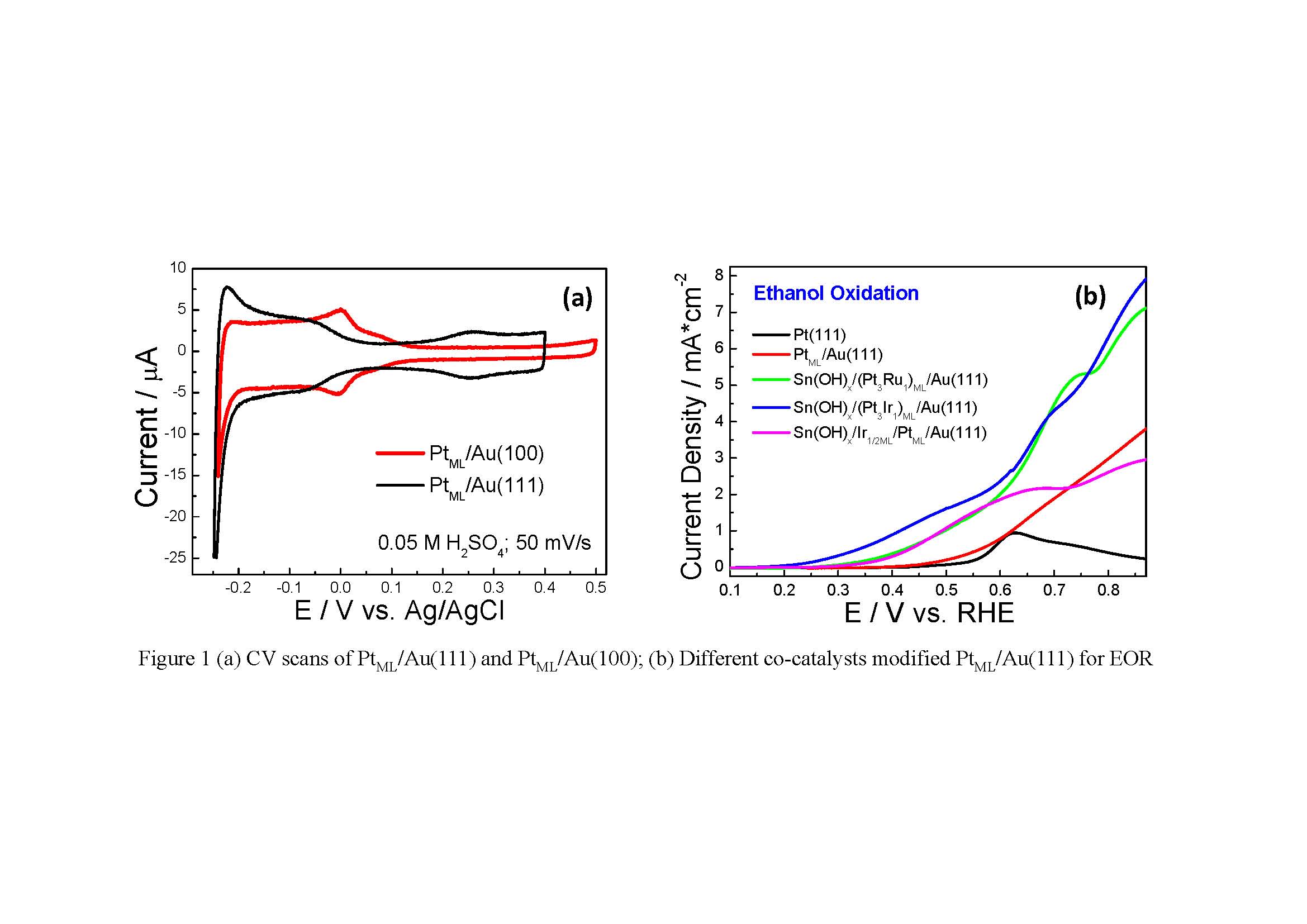