Churchill C2 (Hilton New Orleans Riverside)
E. Delbos, H. El Belghiti (Institut Lavoisier de Versailles, KMG Ultra Pure Chemicals), D. Aureau, M. Frégnaux, M. Bouttemy, and A. Etcheberry (Institut Lavoisier de Versailles)
In the field of the new and renewable energies, the competition between all the conceivable technics requires constant enhancements in term of performances, manufacturing and cost. As example, for the photovoltaic silicon solar cells, one of the first challenges is to replace the actual contact lines made by screen printed silver paste. With this technic, silver particles penetrate throughout the anti-reflective layer (ARC) to ensure the electrical contact with the emitter. Due to the high inflation of the raw silver these last years (an average silver price of 550 USD/kg in 2016 vs. 200 USD/kg in 1985), researches are currently performed to reduce the manufacturing cost, by modifying and/or optimizing the quantity of raw material [1,2], the deposit techniques [3,4], the contact design [5] or both in the same time [6,7].

Electrodeposited copper lines are a good alternative, due to the low temperature process with high growth rate and low expensive method for mass production. However, the copper diffusion throughout the silicon substrate leads to the degradation of the solar cell efficiency. In order to overcome that, one solution consists in depositing a barrier between the silicon substrate and the copper lines. Thanks to its properties (low contact resistance, easy application and good adhesion), nickel is a good candidate for diffusion barriers and capping layers, for both microelectronic and photovoltaic applications [8,9,10,11].

The nickel deposition by electroless way presents various advantages. As example, its selectivity, the capability to deposit conformal thin films and the relatively simple deposition tool comparing to other metallization techniques can be mentioned [12]. Therefore, electroless nickel as a simple cost-effective metallization process for connections has been developed and used in the last years. Autocatalytic, this process requires yet complex plating bath compositions and several deposition steps, multiplying the variable parameters. In general manner, the deposition steps are: (1) substrate surface cleaning, (2) surface modification, (3) sensitization, (4) catalyzing and (5) Ni deposition [13]. In the case of silicon, the deposition steps can be reduced to 3: (1) surface cleaning, (2) surface palladium activation and (3) Ni deposition. The deposition bath is generally composed by a metallic salt, a reducer, a complexing agent and a buffer.

The aim of this research work is to investigate by electrochemical analyses and chemical surface characterizations (figure 1), the mechanisms involved in electroless Ni nucleation and growth. The tracking of the open circuit potential during the plating time and the impedance measurements were used in this work as electrochemical methods, to in-situ characterize the surface state. SEM-EDS, XPS and nano-AES methods were employed as ex-situ surface characterizations.

In a first part, the impact of the initial silicon surface and its modification during the 3 deposition steps was highlighted. In a second part, the nickel nucleation and growth was studied modifying the nature and concentration of metallic salt, reducer and complexing agent and the working temperature. 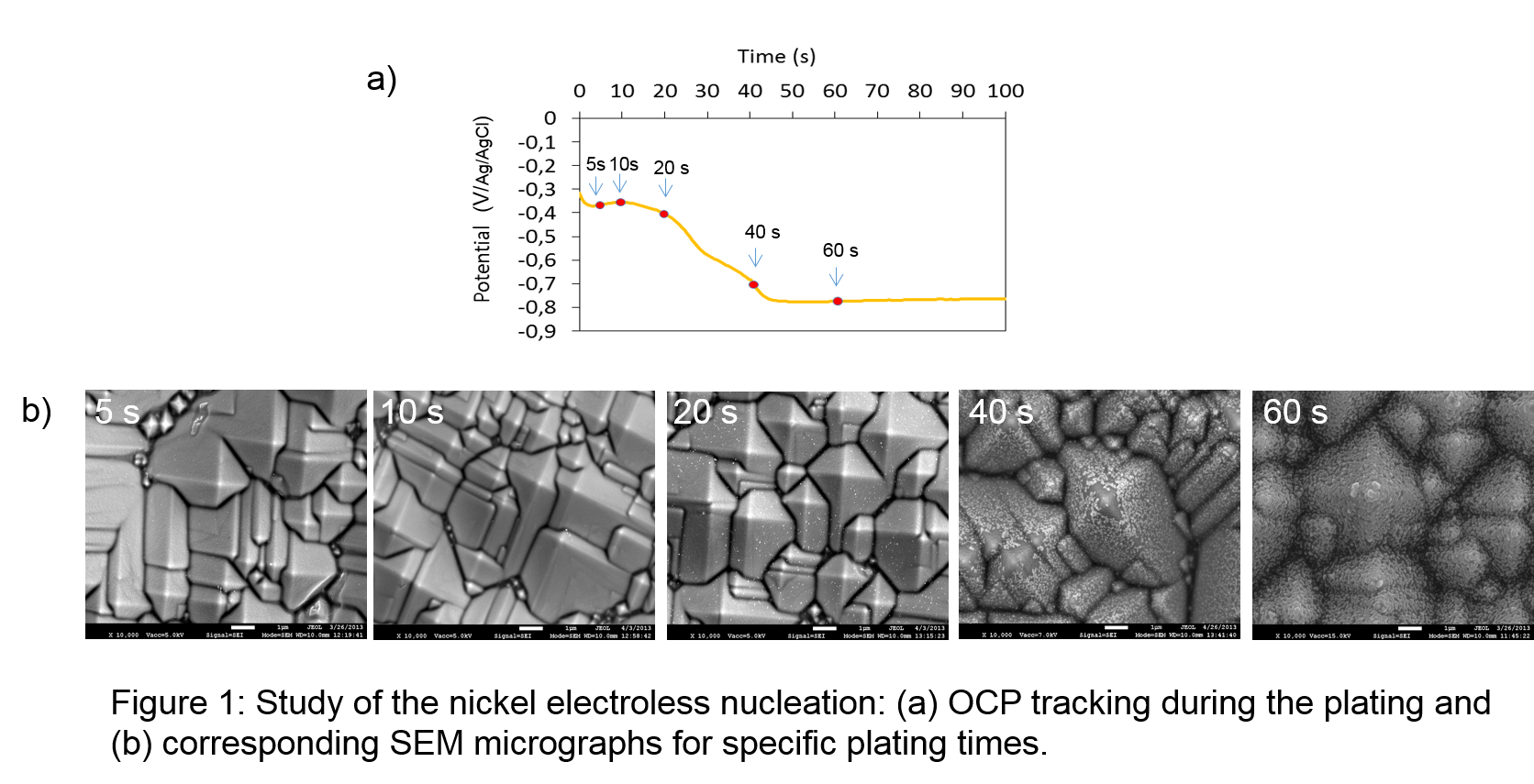