Grand Salon B - Section 7 (Hilton New Orleans Riverside)
P. J. Rheinländer (Technische Universität München), P. Peitl (Technical University of Munich), M. Bernt (Technische Universität München), and H. A. Gasteiger (Technical University of Munich)
Renewable H2 production is a prerequisite for successfully establishing fuel cell-based electromobility and a hydrogen infrastructure. In this respect, proton exchange membrane water electrolysis (PEM-WE) has attracted much interest, not least due to the enormous power densities possible in these devices [1].
PEM-WE research is mainly focused on the anode side, where the oxygen evolution reaction (OER) takes place, causing the vast majority of kinetic losses. On the other hand, the evolution of hydrogen (HER) on the cathode benefits from very fast kinetics on platinum [2][3], which is therefore usually the catalyst of choice.
However, a recent publication from our group revealed that the cathode can still be a source of overpotential, owing not to kinetic but mass transport limitations [4]. This loss was ascribed to a hydrogen pressure gradient, ΔpCL, between the cathode electrode and the flow-field channels due to the build-up of a capillary pressure inside the cathode catalyst layer pores at high current densities. According to the Nernst equation, this would lead to a concentration overpotential term described by:

where pFF represents the experimentally controlled hydrogen partial pressure in the cathode flow-field. Eq.1 would be consistent with the experimental observation, that the mass transport overpotential, ηmt, which includes ηconc, decreases with increasing overall hydrogen pressure [4]. This phenomenon can be best illustrated by plotting the sum of overpotentials for the OER and other mass transport losses (mt), defined as:

whereby Ecell is the measured cell voltage, Erev is the nominal Nernst potential based on the actual H2 and O2 partial pressures in the flow-field, i is the drawn current, RHFR is the high frequency resistance, ReffH+,an and ReffH+,ca are the effective proton resistances in anode and cathode, respectively, and ηHER is the HER overpotential. Assuming that the Tafel slope for the OER is constant (estimated to be ca. 43mVdec-1 in fig.1), the difference between the extrapolated kinetic line (red lines in fig.1) and the ηOER+ηmt data at 1, 3, and 30bar absolute cathode pressure represents the mass transport losses which clearly decrease with increasing H2 pressure.
Since this supports the existence of a ΔpCL–driven capillary pressure, we explored the effect of the ionomer/carbon mass ratio (I/C) in the cathode electrode on mass transport losses, as one would assume that increased ionomer filling of the catalyst layer reduces the average pore size and thus increases the ΔpCL–term. This effect can be seen by comparing ηOER+ηmt for cathodes with a low I/C ratio of 0.65 (fig.1A) with those of a high I/C ratio of 1.5 (fig.1B). As expected, the mass transport resistances (i.e. the difference between the various pressure lines and the red line) increases substantially with increasing I/C ratio in the cathode electrode. A similar effect can be observed when going from thinner to thicker catalyst layers.
We will provide a detailed analysis of the above-described mass transport overpotential in PEM-WE cathodes and show how the value of ΔpCLcan be estimated therefrom.

Figure 1. Sum of OER overpotential and mass transport losses, ηOER+ηmt (eq.2) vs. current density, determined from PEM-WE polarization curves at 80°C recorded with MEAs comprising an IrOx/TiO2 anode and a 50wt.% Pt/C cathode catalyst laminated onto Nafion®-212. The anode is supplied with liquid water at a constant pressure of 1barabs, while the cathode pressure is varied between 1 and 30barabs (cf. different colours; full and hollow symbols signify independent repeat experiments). (A) cathode with an I/C ratio of 0.65/1 (0.18mgPtcm-2; anode loading of 1.0mgIrcm-2); (B) cathode with an I/C ratio of 1.5/1 (0.22mgPtcm-2; anode loading of 1.8mgIrcm-2). Red lines signify the expected kinetic contributions from the OER (assuming Tafel kinetics and the absence of mass transport limitations at low current densities), so that the vertical distance between the red lines and the polarisation curves represent mass transport overpotential. Other specifications: 12wt.% ionomer in the anode catalyst layer; active area of 5cm2; porous Ti sheets and carbon fiber paper were used as porous transport layers for the anode and cathode side, respectively.

Acknowledgements
We gratefully acknowledge funding from Greenerity GmbH through a subcontract co-funded by the German Federal Ministry for Economic Affairs and Energy (project “HyMotion5-Brennstoffzellenstapel”), and from the Bavarian Ministry of Economic Affairs and Media, Energy and Technology through the project ZAE-ST (storage technologies). 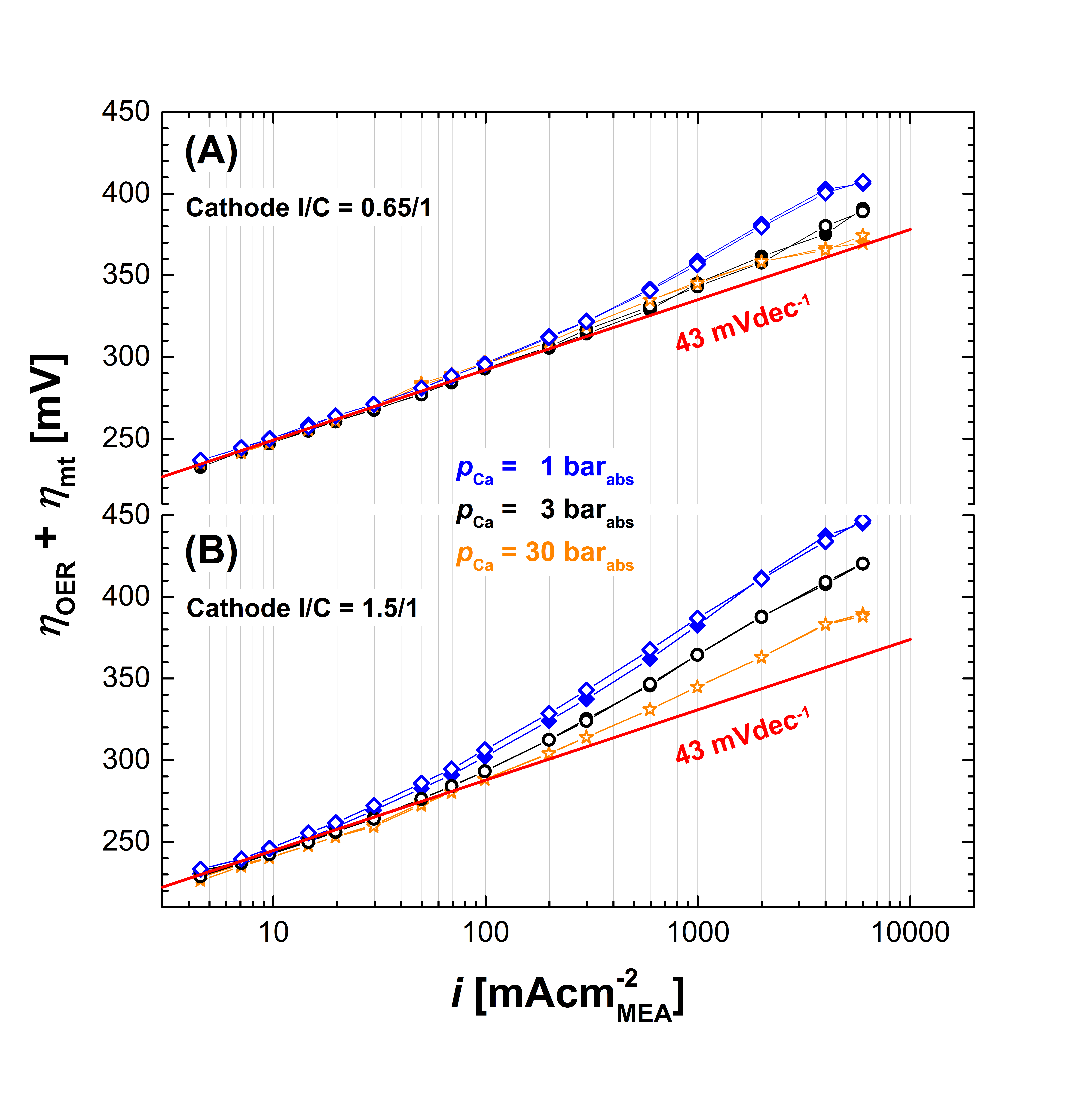