Silicon carbide (SiC) is a chemically stable and photocatalytic semiconductor material. SiC can be grown by different atomic configurations resulting in a large number of polytypes. Among SiC polytypes, 3C-SiC has the smallest band gap (2.3 eV), and thus 3C-SiC is capable to absorb significant part of solar light. In addition, conductive type of SiC can be controlled by doping. Photocatalytic materials with p-type conduction operate as cathode and reduce hydrogen in water. Cathodic operation prevents oxidation of photocatalytic materials. Therefore, p-type 3C-SiC will be an efficient and durable photocatalyst.

However, bulk crystal growth of 3C-SiC is very difficult because this polytype is stable only in growth at much lower temperature than sublimation of SiC, which is a typical condition for bulk SiC growth. This difficulty makes 3C-SiC growth only by chemical vapor deposition (CVD) on Si or 4H- or 6H-SiC substrates. Such the heteroepitaxial growth induces large number of structural defects or polytype mixing owing to lattice mismatch or inheritance of the substrate polytype.

We measured photocurrent-potential characteristics for the photocathodes in 1 M H2SO4 aqueous solution using chopped solar simulator light with 100 mW/cm2. The results are shown in Fig. 1(c). For bare surface, cathodic photocurrent was observed below 0.6 V vs SCE, and it reached -1.4 A/cm2 at -1 V vs SCE. On the other hand, with cocatalysts, photocurrents were observed at higher potential, and in the case of with Pt cocatalysts, it was observed from 0.9 V vs SCE. In addition, at -1 V vs SCE, the photocurrent was -2.3 A/cm2. 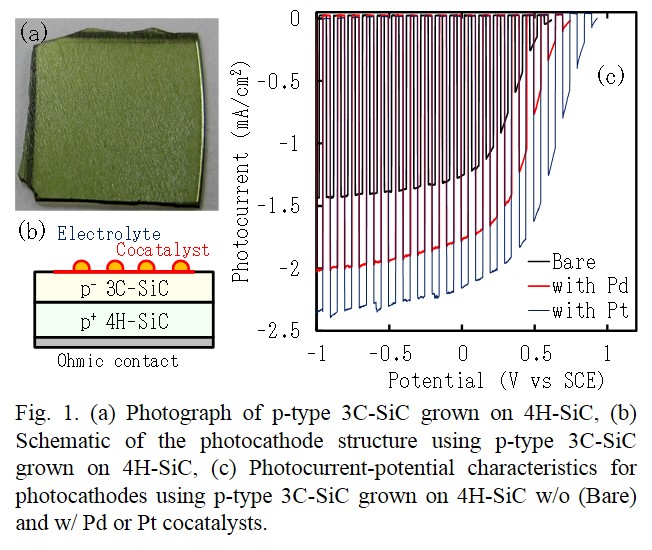