Prince George's Exhibit Hall D/E (Gaylord National Resort and Convention Center)
T. R. Ashwin (University of Warwick), A. Barai (WMG, University of Warwick), J. Chevalier, G. Chouchelamane, L. Somerville (Jaguar Land Rover), A. McGordon (University of Warwick), and J. Marco (WMG - University of Warwick)
Hybrid and electric vehicles are becoming increasingly popular due to their benefits in lowering emissions and lower dependency on fossil fuels. A hybrid vehicle battery spends around 70% of its time in storage at different temperatures compared to being cycled. However there is less work on the effect of storage on battery life time than on cycling. Storage life time prediction is often complicated due to interdependency of ageing mechanisms. In particular, storage ageing is difficult to accelerate and moreover, the ageing is not linearly scalable with time. These characteristics are difficult to analyse using a model such as equivalent circuit models which depend heavily on experimental data. Electrochemical models are a feasible option to analyse the chemical and electrical response of a battery under storage conditions. In this work, the Pseudo Two Dimensional Model (P2D) equations are modified to include a continuous solvent reduction reaction responsible for capacity fade. A FORTRAN program is developed and finite volume based formulation is used to discretize the system of equations; electrolyte concentration, solid concentration, solid potential and electrolyte potential coupled with Butler-Volmer kinetics. An unconditionally-stable implicit method is adopted for time dependent calculations; the time discretization has first order accuracy. Mesh generation was done based on the initial radius and battery dimensions. The capability of this model to predict the SEI layer growth and internal resistance increase under different operating condition is used to analyse and quantify the parasitic ageing reactions. The over potential of the side reaction reduces to zero for a storage condition where no external current is applied. The capacity fading solvent reaction parameters are proportional to the interfacial surface area and the side reaction exchange current density. Thus the critical parameter controlling the rate of SEI layer growth is the side reaction exchange current density. Another important parameter is the temperature of the battery which is found to accelerate cell ageing. However, in this initial work, the analysis is limited to iso-thermal conditions since the dependency of temperature on cell performance is complex. The storage experiment can be divided into two main parts, the characterisation and the storage test. For the first one, an ESPEC thermal chamber has been used to control temperature and humidity level. For storage test, the cells are stored at 25°C at three different SoC values, 20%, 50% and 90% and the capacity characterisation test has been performed after 73, 139, 202 and 297 days to calculate the capacity of the cell. The side reaction coefficient in the electrochemical model was adjusted to match the experimental data for the first point after 73 days. The capacity at the remaining points are predicted based on this initial parameterisation. Conclusions about the parasitic reaction are made based on the variation side reaction exchange current density. The storage results are also used to fine tune the SEI properties and the influence of storage on capacity fading side reaction is investigated for the first time using an electrochemical model. This work establishes a guideline for calculating the SEI properties based on storage ageing experimentation where the driving potential is nearly zero. The results presented in this work can be used as a guiding tool for better battery design for different storage profiles. 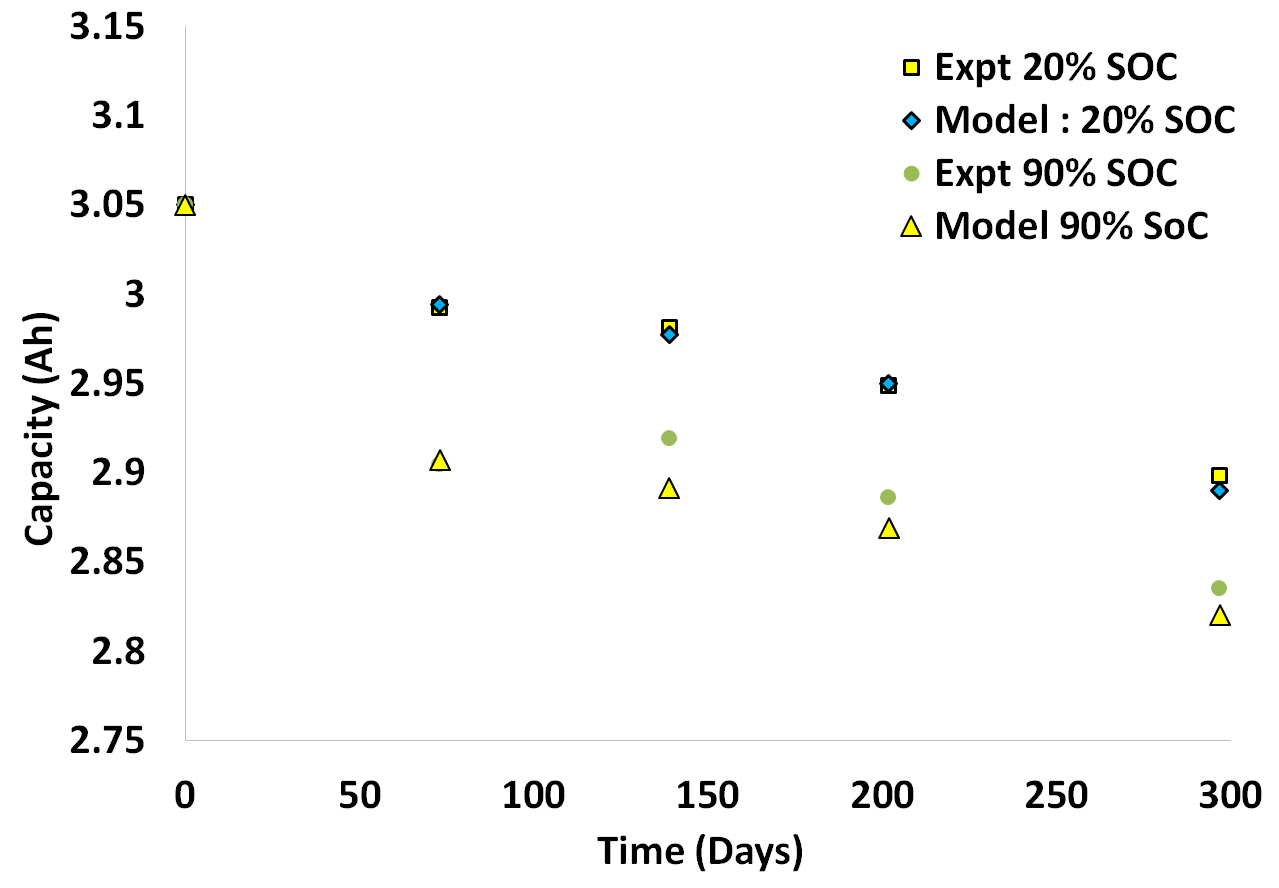