National Harbor 14 (Gaylord National Resort and Convention Center)
K. Kodama (Toyota Central R&D Labs., Inc.), K. Motobayashi, M. Osawa (Institute for Catalysis, Hokkaido University), R. Jinnouchi, A. Shinohara, T. Takeshita, and Y. Morimoto (Toyota Central R&D Labs., Inc.)
The performance of polymer electrolyte fuel cells (PEFCs) is strongly affected by interfaces between the catalyst and ionomer in the cathode catalyst layer. While searching and synthesizing new catalysts have been major strategies for improving the catalytic activity for oxygen reduction reaction (ORR) until recently, modifying the other side of the interface, i.e.the ionomer, is becoming another big challenge because recent studies have revealed its significance on both the activity and oxygen transport. One of the most important properties of ionomers is the strength of the interaction between the anionic groups and Pt surface as already confirmed for real and model catalysts [1 - 3], and therefore, detailed understandings of the adsorption mechanisms of the anionic groups on Pt is essential for developing desirable ionomers.

Figure 1 shows the cyclic voltammograms and ORR Tafel plots in 0.1 M HClO4 for Pt (111) surfaces bare and coated with Nafion® film, which was confirmed to be uniform by scanning electron microscopy. The results indicate that ORR activity is suppressed significantly (by over 80%) by the ionomer, while the coverage of the sulfonate moieties adsorbed on the Pt surface is estimated to be small (0.08 ML) from the adsorption peak in the CV by assuming that the adsorption is a one-electron-transfer process (-SO3– + Pt → -SO3 – Pt + e-).

To further investigate the effect of ionomers, low-molecular-weight sulfonic acids were employed as model compounds for the side-chains of ionomers, and the interface was analyzed by in-situ surface enhanced infrared absorption spectroscopy (SEIRAS). Figure 2a shows the SEIRA spectrum of perfluoro-(2-ethoxyethane) sulfonic acid (PESA, C2F5OC2F4SO3H) adsorbed on polycrystalline Pt film. The spectrum reveals the presence of strong bands due to the asymmetric stretching modes of SO3-and the absence of them due to the asymmetric stretching mode of COC. These observations and the surface selection rule in SEIRAS suggest that the perfluoroalkyl chain is almost parallel to the surface as depicted in Fig. 2b. The orientation of the molecule is presumably determined by the interaction between the ether group and surface and can elucidate the significant ORR suppression by the small coverage with the sulfonate; not only the sulfonate moiety but also the perfluoroalkyl chain blocks Pt sites for ORR. In the meeting, further analytical results as well as promising strategies for suppressing the catalyst poisoning with ionomers will be discussed. 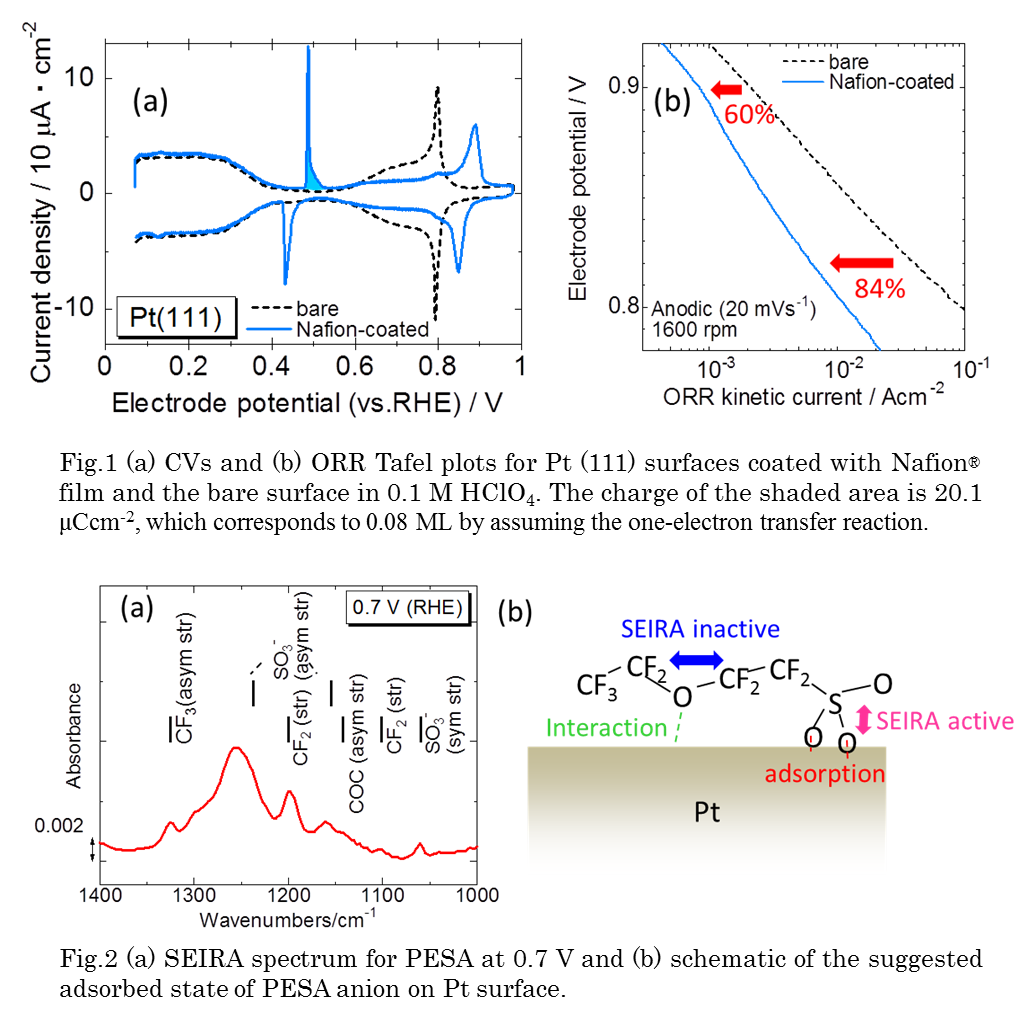