National Harbor 14 (Gaylord National Resort and Convention Center)
A. Phillips, J. Mackay (National Renewable Energy Laboratory), N. Shrivastava (Georgia Institute of Technology), J. M. Porter (Colorado School of Mines), T. Harris (Georgia Institute of Technology), M. Ulsh, and G. Bender (National Renewable Energy Laboratory)
The polymer electrolyte membrane fuel cell (PEMFC) is a clean alternative to petroleum-based technologies such as the internal combustion engine (ICE). In order to be competitive with the ICE in transportation applications, fuel cell systems must have less than a 10% performance loss after 5,000 hours of operation while reaching cost targets of $40/kW [1,2]. The membrane electrode assembly (MEA), a proton conducting polymer electrolyte membrane (PEM) with attached platinum-containing catalyst layers and gas diffusion layers (GDLs), may possess non-uniformities in any of its constituent components, which could lead to performance losses [3,4]. This work studies a subset of casting irregularities located within the PEM to understand their potential impacts on PEMFC initial performance. If the MEA experiences statistically significant lower initial performance as a result of a casting irregularity, then this irregularity should be classified as a defect. Classification of irregularities as defects will ultimately assist the industry by developing threshold detection limits for in-line quality control diagnostics.

Membrane material was cast on a web-line operating within and at the boundaries of the process window by controlling process parameters such as slot and coating gap, flow rate, and substrate speed. The resulting membrane material was either pristine or contained air bubbles, cracks, and contamination, ranging from 0.6 to 3 mm. Gas-diffusion electrodes (GDEs) were fabricated using an ultrasonic spray system. The active area and nominal loading of these GDEs were 50 cm2 and 0.2/0.2 mg Pt/cm2, respectively. MEAs were assembled in the cell by placing a sheet of fabricated membrane material in between two pristine GDEs. Operating conditions for all samples were Tcell: 80°C, anode/cathode relative humidity (RH) at 32/32 and 100/50%, 1.5/2 stoichiometric flow rates of H2/Air, and 150/150 kPa backpressure. Voltage controlled polarization (VI) curves were conducted using a 121 channel segmented fuel cell system. To quantify performance impacts the VI performance of the MEAs containing casting irregularities was subtracted from that of pristine reference MEAs. Thermal imaging was performed subsequent to the performance experiments to map hydrogen crossover to spatial performance [5].

Figure A shows initial VI curves performed at 32/32% RH for four pristine reference samples as well as two samples with casting irregularities. The VI curve data indicate that the samples with irregularities have statistically lower OCV values than the pristine samples. Figure B illustrates the experimental method using GT118 as a representative sample. Prior to the experiment the morphology and size of the casting irregularities were determined using optical microscopy. Sample GT118 contained two air bubbles with sizes of approximately 660 and 1416 µm as shown on the left of Figure B. Then spatial current density distributions were measured with the segmented cell to determine to what extent the casting irregularities caused localized performance losses. The red regions in the spatial current density distribution, shown in the center of Figure B, indicated the lowest local performances in the cell. Subsequent to the performance experiment, a spatial thermal imaging diagnostic was applied to determine regions of increased hydrogen crossover. In the thermal imaging map for GT118 as shown on the right of Figure B, the red boxes indicate air bubble locations and the white regions denote areas of increased hydrogen crossover. These data show the correlation between casting irregularity location, local performance decrease, and increased local hydrogen crossover. In this presentation, we will discuss the impacts of the various casting irregularities in the membrane, and how certain experimental methodologies can be potentially used as defect classification tools. 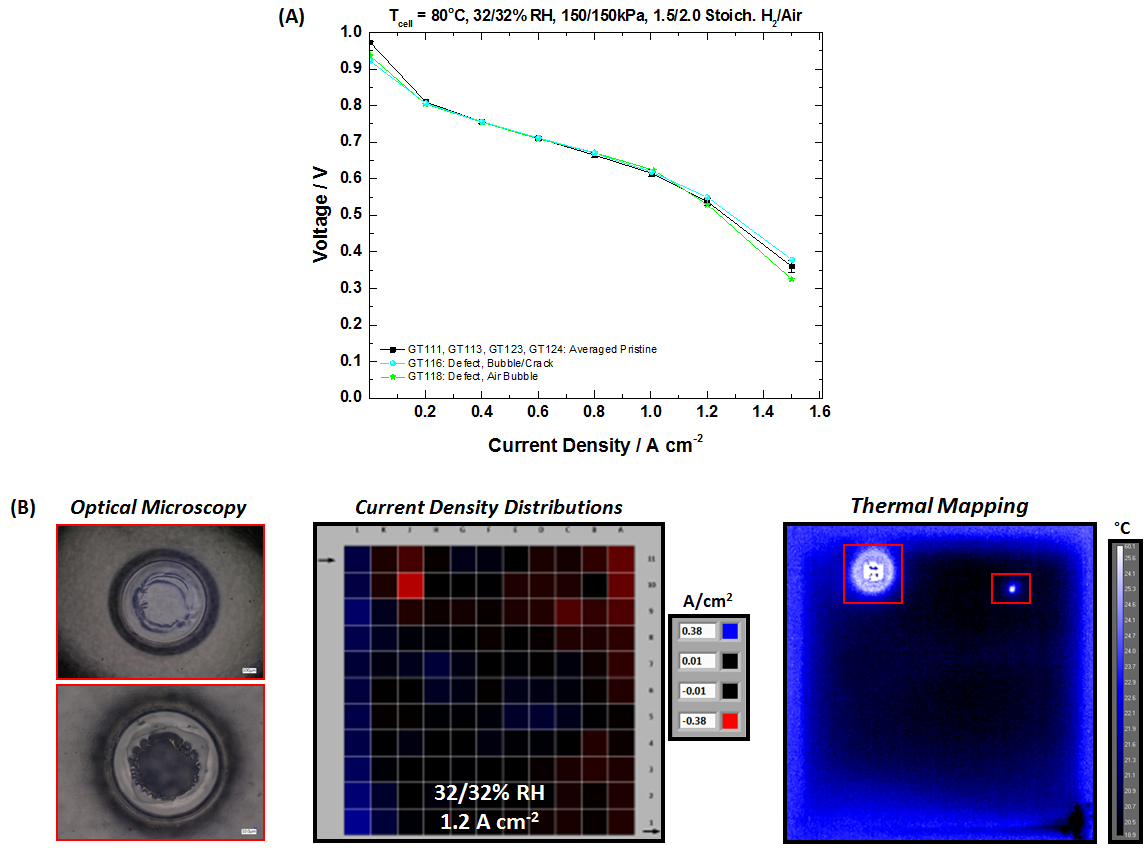