Chesapeake L (Gaylord National Resort and Convention Center)
A. Mameli, B. Karasulu (Eindhoven University of Technology), M. A. Verheijen (Philips Innovation Services), A. J. M. Mackus, W. M. M. Kessels, and F. Roozeboom (Eindhoven University of Technology)
Area-selective atomic layer deposition (AS-ALD) is being considered as the next paradigm shift in future device fabrication. Given the chemical nature of the deposition technique, ALD is very sensitive to surface functional groups and deposition conditions. This characteristic often leads to different nucleation delays when growing a material on one surface (growth surface) as opposed to another (non-growth surface). This feature has been exploited by several research groups to obtain area-selective growth of various materials.1,2 The approaches that have been developed for achieving AS-ALD can be categorized as either area-activation1 or area-deactivation3. When no subtractive steps are employed, area-activation is referred to as direct-write (i.e. maskless) ALD.

In this contribution, results will be presented based on recently developed direct-write ALD approaches for two relevant metal oxides: In2O3:H, and ZnO. The method exploits the difference in nucleation delay on OH- and H-terminated Si surfaces. As shown in Figure 1, direct-write ALD can be achieved by locally activating an H-terminated Si starting surface using an O2-fed µ-plasma printer or by electron beam induced deposition (EBID) of a SiO2 seed layer. This allows to define OH-rich regions with dimensions ranging from a few microns (µ-plasma) down to tens of nanometers (EBID). Therefore, high-quality materials provided by ALD can be combined with the patterning capabilities of direct-write techniques to obtain patterns in a bottom-up approach.

The area-selective characteristics for these two different processes was probed by X-ray photoelectron spectroscopy and electron dispersive X-ray spectroscopy for micro- and nanoscale patterns, respectively. As shown in Figure 2, in-situ spectroscopic ellipsometry was used to investigate the nucleation behaviours of the ALD processes on the growth and non-growth surfaces. Finally, the key reasons for the selectivity have been unveiled using density functional theory (DFT) simulations. 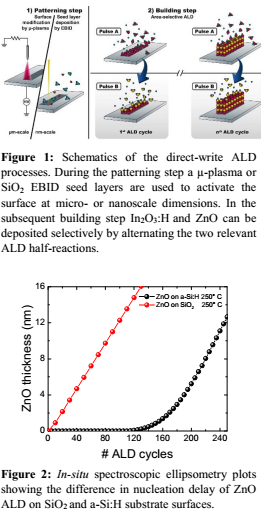