Chesapeake H (Gaylord National Resort and Convention Center)
K. Akamatsu, R. Fujiwara, Y. Takashima, T. Tsuruoka (FIRST, Konan University), Y. Sato, H. Iisaka, J. Murai, M. Hiraoka, and H. Yanagimoto (Toyota Motor Corporation)
Demand for the development of deposition strategies of well-defined metal thin films with good chemical and physical characteristics has been rapidly growing in the field of various electronics applications. For example, copper electro- or electroless deposition has been widely utilized and investigated in microelectronics industry due to its low electrical resistivity and high electromigration resistance, as compared with aluminum. The conventional plating bath for electro- or electrolless copper deposition involves various chemical reagents such as deposition promoter (or inhibiter), brightening and smoothing agent, etc. These additives, typically organic molecules, sometimes cause mechanical problems due to inclusion of such additives during deposition process, and the discharge from the deposition bath can be a serious environmental issue. Therefore, the development of a facile process that enables additive-free deposition of metallic thin films as well as low environmental toxicity is an important challenge for the fabrication of microelectronic elements. In order to sustain the demand for generating multichip packaging systems for future electronic devices, it would be exceedingly useful to develop novel electrochemical deposition strategy with high-throughput capability that would allow stability of electrochemical reaction at higher deposition rate from plating bath without organic additives. In this context, direct metal deposition processes though ion conducting films have been investigated, such as the fabrication of metallic patterns on polymer substrates using ion-doped precursor films. A variety of direct deposition techniques have been introduced by several groups, including ours,1,2) based on photoinduced chemistry, thermal treatment, and selective chemical reduction for polyimide and other functional polymers. We have also reported a chemical metallization strategy that utilizes electrochemical constructive lithography with post lift-off process, which enables the fabrication of metal patterns on the polyimide substrate.3) The use of ion-doped precursors has triggered the development of new concept for electrochemical deposition. Herein we report for the first time that metallic thin films can be deposited through polyelectrolyte thin layers placed on the cathode electrode by the diffusion of metallic ions from the interior of polyelectrolyte, which is essentially different to conventional solution-phase electrodeposition processes (Fig. 1). By taking advantage of the cation-exchangeable nature of polyelectrolyte layers used for creation of solid interface, we demonstrate in this study how it is possible to merge the electrochemical deposition at cathode-polyelectrolyte interface and diffusion of cations through polyelectrolytes for development of novel solid electrodeposition (SED) process. As a proof of concept study, we herein present the successful electrochemical deposition of copper and nickel thin films at the interface between an electrode and ion-doped polyelectrolyte layers from the baths containing only metal salts (without any additives). The effect of cation concentration, temperature, and electrochemical deposition conditions on the deposition rate, growth process and morphology of the films has been investigated. Several electrochemical, microscopic and quantitative analysis revealed that the metallic films have been successfully deposited at the cathode-polyelectrolyte interface through ion exchange reaction in the polyelectrolyte layers, the deposition rate of which are determined by ion exchange rate of cations. This strategy offers an opportunity to translate solution-phase electrochemical deposition into a high-throughput, cost-effective, environmentally-friendly process for the fabrication of metal thin films on substrates. 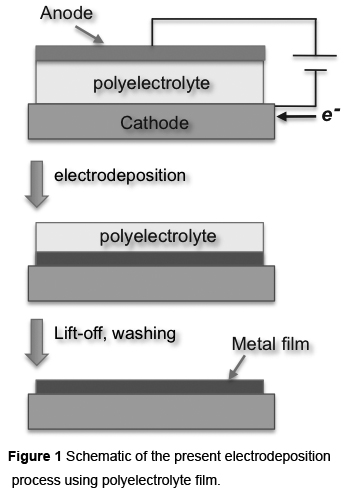