National Harbor 8 (Gaylord National Resort and Convention Center)
B. Wu and W. Lu (University of Michigan)
Mechanical degradation is one of the main causes of capacity fade in lithium-ion batteries. During lithium intercalation and de-intercalation, the active material particles of battery electrodes experience mechanical deformation, which induces stress inside particles and in-between particles. These stresses can lead to cracks and fractures of the electrode, such as cracks inside particles or in-between particles, causing isolation of active materials, disruption of the electrically conductive particle network and exposure of fresh surfaces for side reactions that result in capacity degradation. This work aims to develop a multi-scale mechanical-electrochemical model which enables fully coupled mechanics and electrochemistry at both particle and electrode levels by incorporation of particle interaction.

Coupled electrochemical and mechanical modelling is essential to investigate stress generation and to evaluate its effect on battery performance. However, prior models are mostly focused on a single, isolated particle. While these models are very useful to consider stress and fracture inside a particle, they cannot be used for problems such as fracture in-between particles since particle interaction is omitted. Moreover, the electrode level model coupling of mechanics and electrochemistry is lacking. There have been several attempts to couple the mechanical model of isolated particles with the porous electrode model to analyze the distribution of intercalation stresses inside different particles across the electrode. In those attempts, however, the particles are considered isolated with no interaction between them. It should be noted that particle interaction can result in significant stress level comparable to the stress generated from the concentration gradient.

Mechanical stress can change the electrochemical potential of a solid, and therefore (i) affects the diffusion in the solid, and (ii) affects the electrochemical reaction between the solid and the electrolyte. Although the first effect has been generally addressed, the second effect of mechanical stress on the electrochemical reaction rate has not been included in most models. Including the second effect is necessary when modeling particle interaction since stress gradient in the electrode leads to spatial-dependent interaction stress between particles. It is necessary to account for different intercalation/de-intercalation currents for particles under different stress states that are dependent on their interaction with neighbor particles.

An important finding we have obtained with this model is a new degradation mechanism, where small electrochemically inactive regions can potentially cause major degradation. We find that the tensile stress generated in the vicinity of an inactive region is large enough to easily break the binder between particles, resulting in fracture or growth of the inactive region. The result points to an approach to reduce degradation by improving the homogeneity of the electrode. 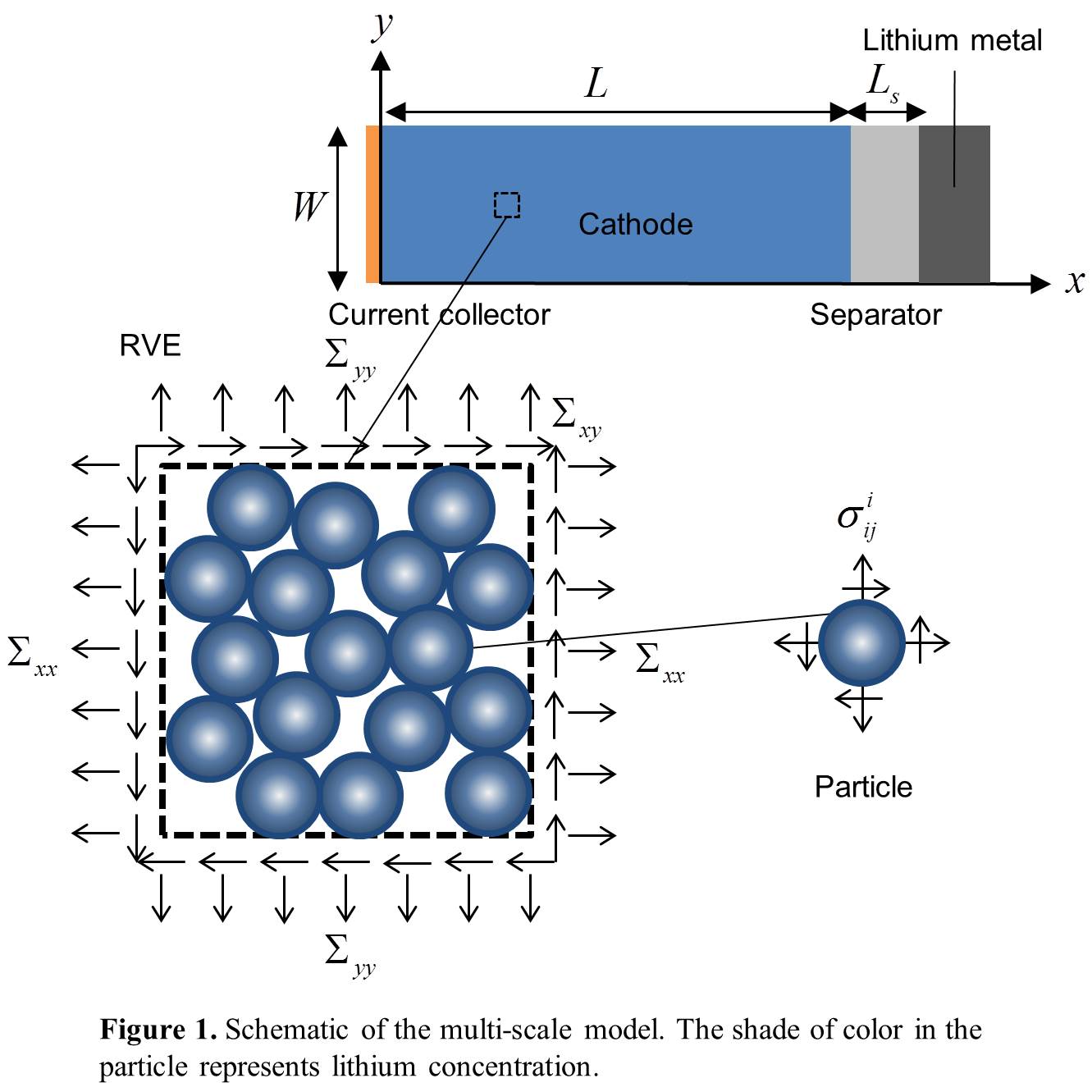