For reliable lifetime predictions, models for cell degradation are necessary. Physicochemical models that include ageing mechanisms are based on a detailed set of parameters, which are often not available, and require parametrization of the degradation rates. Instead, purely empirical models can be parametrized without knowledge of internal cell setup through extensive testing, however are prone to extrapolation errors due to the utilized mathematical functions. In this work, a semi-empirical model based on a reduced set of internal cell parameters and physically supported degradation functions is used (1).

Due to the limited knowledge about degradation mechanisms, purely empirical models as well as semi-empirical models tend to lump multiple degradation effects into single functions. This leads to prediction errors when deviating from the parametrization test conditions. E.g. for cycle ageing, Waldmann et al. reported a transition of dominating ageing mechanisms at 25°C (2). The ageing above 25°C was attributed to SEI-growth and cathode degradation, for temperatures below 25°C to lithium plating. Model development therefore should aim for a separation of the degradation mechanisms where possible. The respective mechanisms then can be modelled through functions that are suitable for the degradation driving factors, which is the focus of this work:

As such models require parametrization, a lifetime test study is conducted. Cell type and experimental parameters are in accordance with an application in stationary systems. Lithium iron phosphate batteries have shown capacity retention for more than 5,000 full cycles before usable capacities fall below 80%, which is suitable for stationary applications (3). The parametrization is based on a commercial 26650 lithium iron phosphate cell with a nominal capacity of 3 Ah. The lifetime study is separated into parametrization and validation tests. Validation tests are excluded from model parametrization and thus show the model performance in deviating, more realistic conditions.

Temperatures in the tests are 0°C, 10°C, 15°C, 25°C, 35°C, 45°C and 55°C to accurately describe varying degradation mechanisms. Parametrization for calendar ageing consists of storage tests of cells at varying State of Charge (SOC) in steps of 12.5%. Cycle ageing parametrization is based on constant current full cycle tests at C-Rates of 0.5C, 1C and 1.7C with and without CV-phases at the end of charging. For validation, a dynamic profile representative for a summer and a winter day of a residential photovoltaic-battery system is tested. Regular characterization tests were performed at 25°C. As experimental results for the degradation in terms of capacity loss showed to be more severe than an impedance increase, we focused on modelling the battery capacity.

Summarizing, the model enables a cell degradation simulation over a wide temperature range. Through independent, yet temperature-dependent calculation of calendar and cycle ageing effects detailed studies on the effect of thermal management are enabled.

Details on the prediction performance against the validation tests and model limitations are given in the presentation. Finally, model results for real-world grid applications as well as strategies for optimized operation temperatures are presented and evaluated. 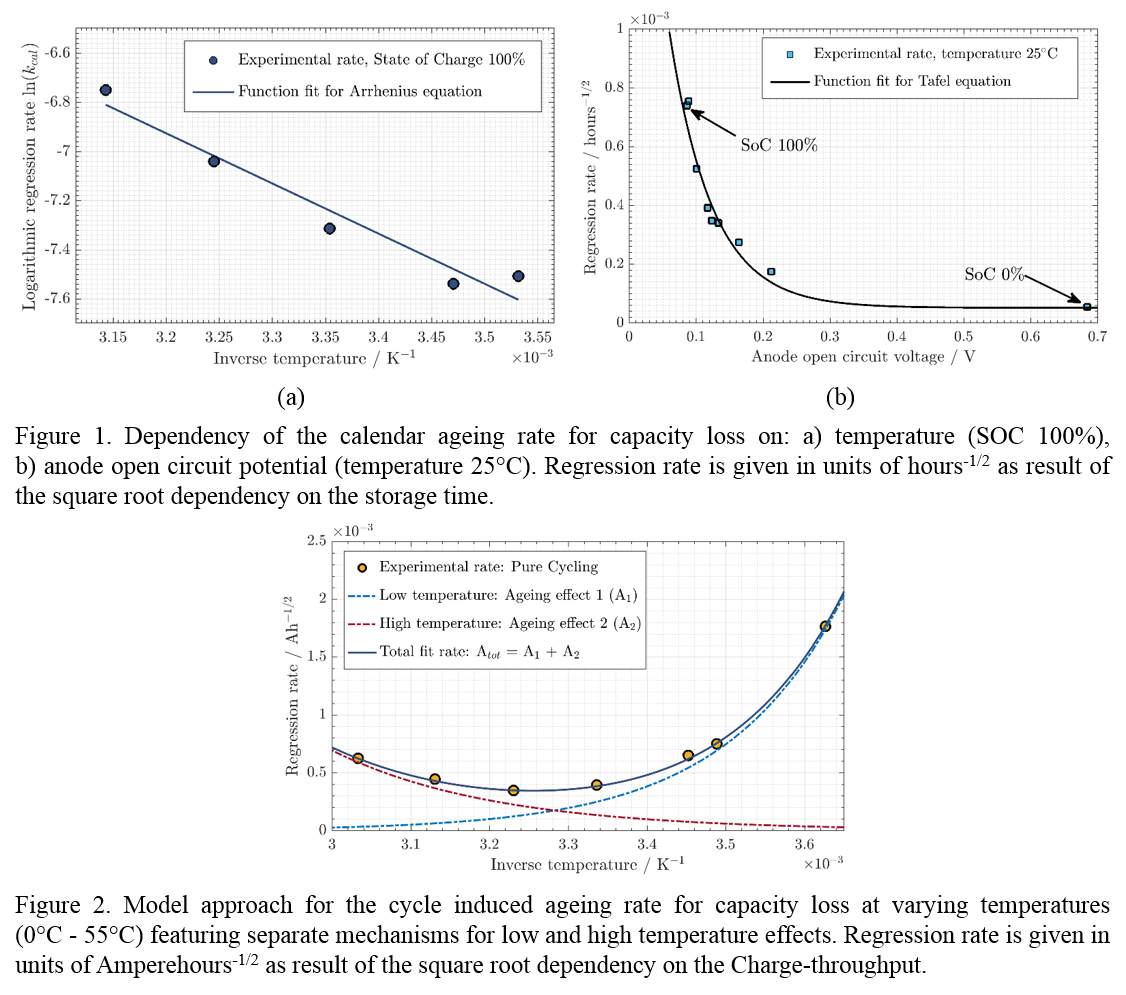