Chesapeake C (Gaylord National Resort and Convention Center)
Y. Takahashi, T. Uchida, A. Tsurumaki-Fukuchi, M. Arita (Hokkaido University), and A. Fujiwara (NTT Basic Research Laboratories, NTT Corporation)
Semiconductor multiple-quantum-dot devices have been attracted as a single-electron pump and quantum bits (qubits) [1, 2]. In particular, silicon-based coupled-quantum-dot has been paid attentions for the applications as qubits in solid state quantum computers due to their long coherent time of electron spins [3]. In the previous reports, these devices have been demonstrated by the use of two-dimensional electron gas (2DEG) and multiple control gates, where many gates were used to form tunnel barriers. This device concept makes it difficult to integrate quantum dots (QDs) due to the interference of many gates. For the applications in quantum computing, development of coupled QDs with a smaller number of control gates is considered.

We have already succeeded in the fabrication of serially coupled Si triple-quantum-dots (TQD) by pattern-dependent oxidation (PADOX) method [4] and additional oxidation of the silicon nanowire on a SOI wafer with three control gates [5, 6]. The formation of a Si TQD, where each QD is formed just under each control gate, was confirmed experimentally.

In this study, we propose a simple analyzing method to evaluate the TQD by defining the contributions from each QD in stability diagrams. In order to divide the complicated stability diagram of TQD into the diagram of each QD, we employ the simultaneous scanning of three gate voltages with different sweeping ratios [7]. The effectiveness of the method is also confirmed even when the inter-dot coupling capacitance is large as shown in Fig. 1(c) and (d). The analysis using this method was applied to a Si TQD device fabricated on SOI wafer and successfully achieved the nine gate capacitances of the TQD. 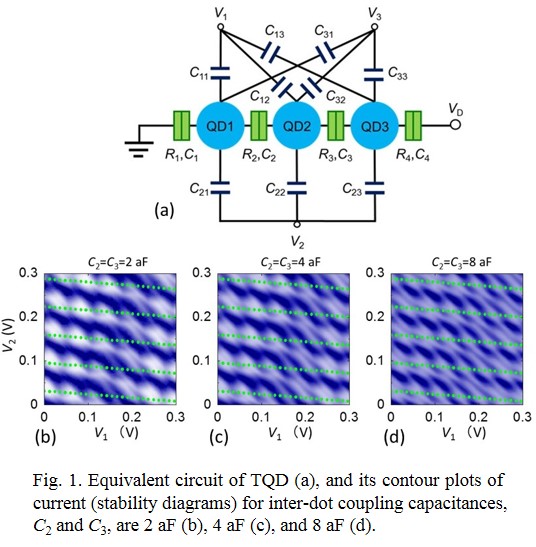