Prince George's Exhibit Hall D/E (Gaylord National Resort and Convention Center)
F. Richter, A. Gunnarshaug, O. S. Burheim (Norwegian University of Science and Technology), P. J. S. Vie (Institute for Energy Technology), and S. Kjelstrup (Norwegian University of Science and Technology)
Heat effects and temperature are known to be of great importance to a Li-ion battery’s performance and lifetime expectancy. In this context the reversible heat effects, i.e. effects that are associated with charge transfer and electrode reaction entropy, play an important role [1, 2]. These effects are however scarcely investigated, especially with respect to the single electrode reaction entropy. These values can be obtained when measuring a symmetric cell under a temperature gradient, i.e. two similar electrodes at zero current and at different temperatures [3-4]. We report values of the thermoelectric potential of the symmetric cell consisting of two identical LiCoO2electrodes separated by an electrolyte:

The electrodes are commercial LiCoO2 electrodes on an aluminium current collector, each kept at temperatures; T and T + ΔT. The electrolyte is 1 M lithium hexafluorophosphate (LiPF6) in a EC DEC mixture (1:1, volume wise) soaked in a separator. The cell is assembled as a pouch cell, and the electrodes are thermostatted to the specified temperatures.

We show that there are two significant contributions of opposite sign to the thermoelectric signal relative to the temperature difference; commonly known as the Seebeck coefficient. The contribution from the Peltier heat is obtained from the steady state value after 3-5 days. The second contribution, which manifests itself within hours, is a Soret effect. From these results, we report the transported entropy of Li+ and estimate the heats of transfer for the electrolyte components.

The attached figure shows a cross section of the cell used in these measurements, where one side is heated by hot water and the other cooled by cold water. The pouch cell is sandwiched between these two sides and layers of copper containing thermocouples, so that the actual temperature difference on the surfaces of the pouch cell is known and uniform. 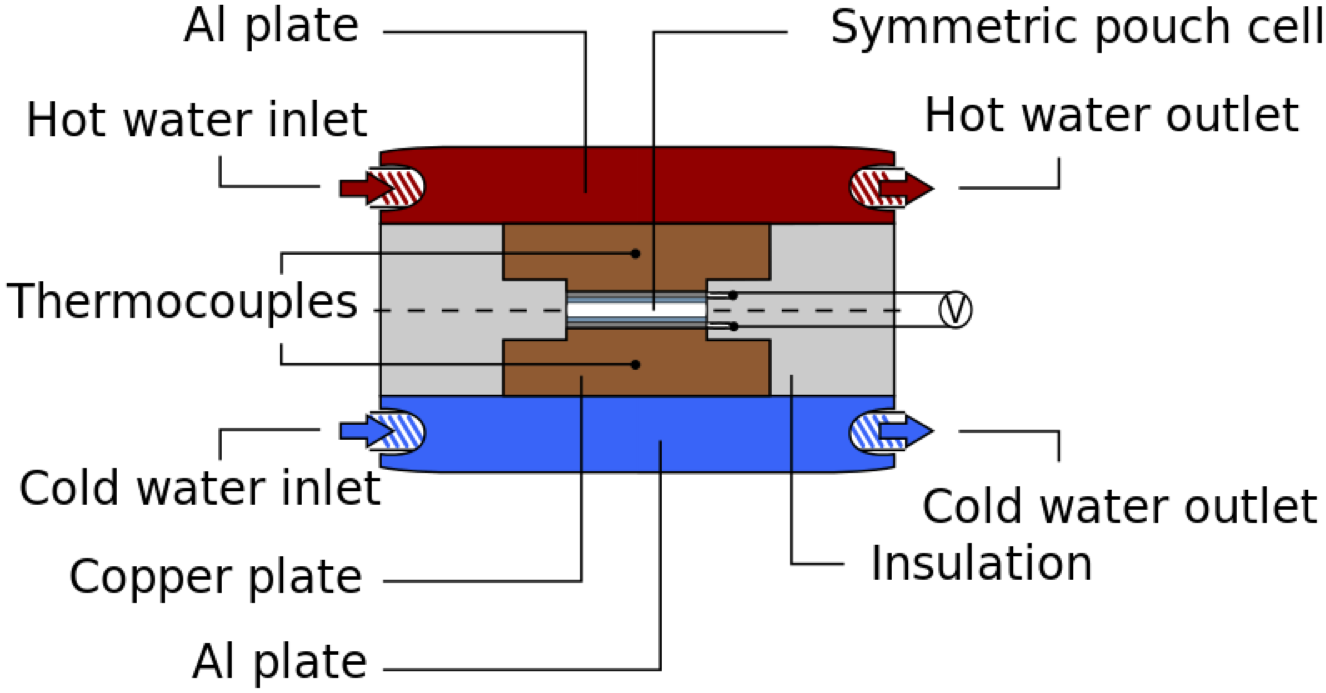