Since the pioneering publication by J.B. Goodenough et al. [1], phospho-olivines LiMPO4 (M = Fe, Mn, Co, Ni) had been studied for their application as cathodes for Li-ion cells. From the whole family of isostructural compounds, only cathodes prepared from LiFePO4 had been introduced into mass production. LiMnPO4 has higher potential versus metallic lithium compared to LiFePO4, but synthesis of LiMnPO4 compounds which can work in batteries with high loads is more difficult [2]. One of the successful synthetic routes consists in preparation of intentionally non-stoichiometric compositions [3]. Other possible way is to synthesize LiMn1–xFexPO4 phospho-olivines [4, 5]. In recent years, our group has proposed and investigated an alternative route to the conductivity enhancement, namely a thermal nanocrystallization of glassy analogs of the important crystalline cathode materials, such as: V2O5, LiFePO4 and Li3V2(PO4)3 [6, 7]. The advantages of this approach include the absence of carbon additives, simplicity and straightforwardness of synthesis, which consists of two stages only: (i) glass preparation by melt-quenching and (ii) thermal treatment of the glass to induce its nanocrystallization. Our experience with that method has shown that one can, by the appropriate heat-treatment, achieve a gigantic (even by a factor 109) and irreversible conductivity enhancement.

In this research, we aimed to replace some of iron ions in LiFe0.88V0.08PO4 glass with manganese in order to obtain highly conductive nanomaterials. Appropriate amounts of precursors: Li2CO3, FeC2O4·2H2O, Mn(CH3COO)2·4H2O, (NH4)H2PO4 and V2O5 were mixed in a mortar, melted at 1300°C in reducing atmosphere and rapidly quenched. Their amorphousness was confirmed with X-ray diffractometry (XRD) and thermal events occurring in the samples were observed with differential thermal analysis (DTA). Electrical conductivity was measured upon heating and subsequent cooling ramps with impedance spectroscopy within wide frequency range 10 mHz – 10 MHz.

DTA curves of as-received samples were typical for glassy materials. A glass transition and two crystallization peaks were observed. Preliminary electrical results (Fig. 1) showed that initial conductivity (1.2·10–13 S/cm) can be increased of at least 10 orders of magnitude to ca 10–3 S/cm. XRD patterns acquired upon heating to 580°C indicated three crystalline phases: triphylite LiFePO4, lithiophilite LiMnPO4 and lithium iron phosphate Li3Fe2(PO4)3. All of the three structures are electrochemically active and therefore are suitable to be used as cathodes in Li-ion batteries.

This research has shown that thermal nanocrystallization of glassy analogs of LiFe1–xMnxPO4 resulted in highly conducting materials that may be used as a cathode in Li-ion battery. The addition of vanadium was to improve its glass forming properties and to provide favorable conditions for electron hopping in the nanomaterials. 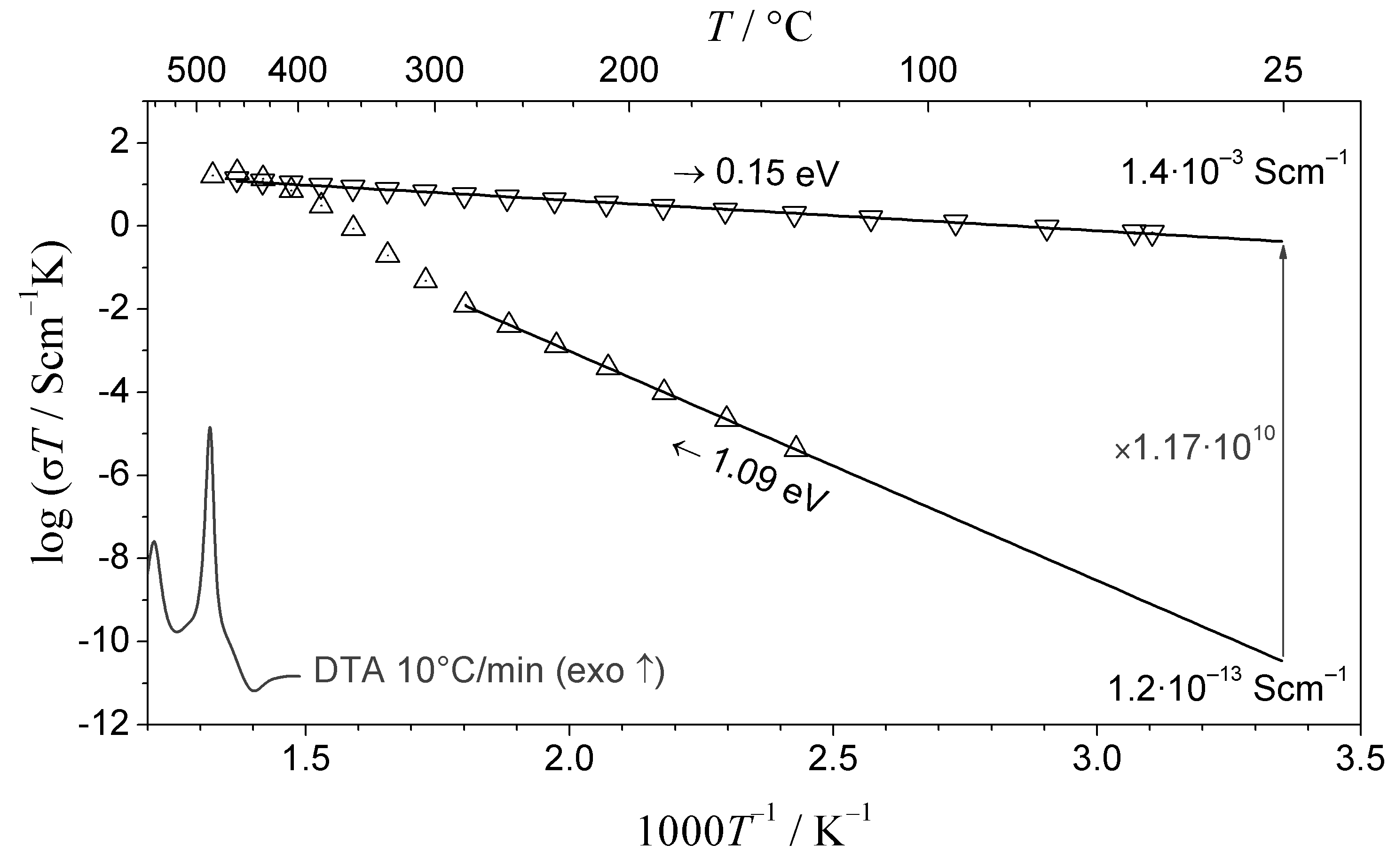