Lithium ion battery is dominant in secondary battery market due to its long cycle life and high energy density compared to other batteries such as nickel hydride and lead acid batteries and thus has been widely used in electronic devices. However, present lithium ion battery, which uses olivine LiFePO4, spinel LiMn2O4 or layered LiCoO2 as cathode materials, cannot meet the requirement of the power sources for transportation applications. With the development of electric vehicles, lithium ion battery with higher energy density is needed. One of the effective ways to enhance the energy density of lithium ion battery is to employ high voltage cathode materials. LiNi0.5Mn1.5O4 cathode has received a great attention for its high potential plateau at around 4.7 V (vs. Li/Li+) and its low price due to enough manganese resource. In this work, LiNi0.5Mn1.5O4 cathode films were deposited by reactive radio-frequency (RF) sputtering on stainless steel substrate. The effects of post-annealing process on the crystallinity and electrochemical performance were examined. As the post-annealed temperature increases, the crystallinity of the thin film becomes better. However, the electrochemical properties did not show the corresponding results. The metal inter-diffusion between stainless steel and LiNi0.5Mn1.5O4film was observed in the annealing process at 600 ℃ or more.

LiNi0.5Mn1.5O4 thin films were fabricated on Stainless Steel substrates. 400 nm-thick LiNi0.5Mn1.5O4 cathode layers were deposited by reactive sputtering using LiNi0.5Mn1.5O4 target. After the deposition, the cathode thin film on stainless steel was crystallized according to various post-annealing temperatures. The electrochemical cell consisted of a Li-metal foil counter electrode, and 1mol/L LiPF6 in a 1:1 solvent mixture of ethylene carbonate and diethyl carbonate as the electrolyte. The cells were assembled in an argon-filled glove box. The structure and crystallinity of the films were investigated using X-ray diffraction (XRD) with Cu Ka radiation. Charge / discharge tests were performed between 2.5 and 5.0 V in the current-rate of 0.05C. The secondary ion mass spectroscopy (SIMS) depth profile measurements were used to analyze the LiNi0.5Mn1.5O4thin films.

The XRD examination of the LiNi0.5Mn1.5O4 thin film on stainless steel substrate obtained from Rf-sputtering method confirmed the spinel crystal structure (Fig. 1). Charge / discharge profiles showed typical curves of spinels such as LiMn2O4 and LiNi0.5Mn1.5O4 at the 1st and 30th cycles (Fig. 2). Among the various post-annealed samples, the 500 °C sample exhibited the best characteristics. The low plateau at about 4 V corresponds to the redox reaction of Mn3+/Mn4+, while the high plateau at about 4.7 V corresponds to the redox reactions of Ni2+/Ni3+ and Ni3+/Ni4+. To investigate the inter-diffusion between the film and the substrate, SIMS depth profile measurements were performed on LiNi0.5Mn1.5O4 thin films at the different post-annealed temperatures (Fig. 3). Above 600 °C, Fe ion and Cr ion were observed in the LiNi0.5Mn1.5O4region.

Spinel LiNi0.5Mn1.5O4 thin films were successfully prepared on stainless steel substrates by sputtering method. The post-annealed temperature plays an important role in the formation of the LiNi0.5Mn1.5O4film. As the post-annealed temperature increased, the crystallinity of the thin film increased. However, at 600 °C or higher, inter-diffusion occurred between the substrate and the thin film, and secondary phases were formed. As a result, the electrochemical characteristics were deteriorated due to these characteristics. 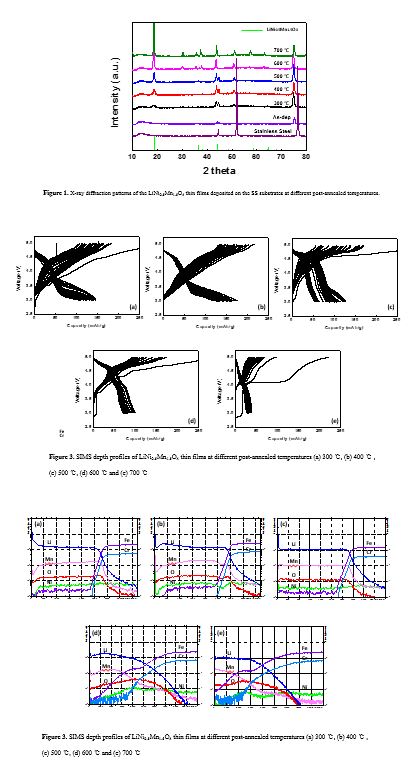